My Twitter feed has been filling up recently with a lot of articles talking about how bad an idea it is for the Detroit Red Wings to build a new, taxpayer financed arena.  To me, this size investment in downtown Detroit is a no brainer.  Moreover, taxpayers helping to fit the bill in a place dubbed Hockeytown makes a lot of sense to me.  Please, read on.

Why is Detroit Bankrupt?

This recent news of bankruptcy in Detroit is close to my heart.  First, prior to switching to a career in sports, I worked for more than eight years as an urban planner and I have a Master’s degree in Urban Planning.  Also, I grew up just north on I-75 in Flint, Michigan and am an alumnus of Western Michigan University.  My parents were both factory workers at different points.  My father passed away at 48 while waiting for a Worker’s Compensation settlement after falling off a truck on a forklift.  My mom is unemployed after being laid off several times and now is too old to get back into manual labor.

This is not my sob story, but the way many Michiganders are living today.   As over 1 million people have vacated Detroit since 1950, they have left acres upon acres of vacant houses and commercial buildings to keep company the rows of rat-filled industrial complexes.

The demise of Detroit is one-part natural economic demise and one-part government money squandering.   We could argue about why Detroit is in the state it is in, or we can figure out a solution.  As recently stated by the City’s appointed financial manager and from urban economists for decades, the main problems in the city are that it is too spread out and there is too much blight.

The investment by Dan Gilbert (owner of the Cleveland Cavaliers and Quicken Loans) and Mike Illitch (owner of the Red Wings, Detroit Tigers Little Caesar’s Pizza, and much more) has been to refocus on development downtown.  While the bleeding continues in Detroit, imagine what the place would be like without the investment of these business owners.  Future investment can only make the city stronger.

What better way to get rid of huge swaths of blight then to build something arena sized?  In a perfect world, the billionaire Illitch family 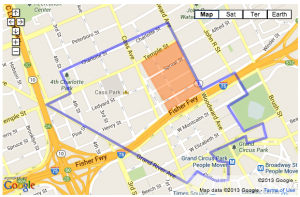 $600 million of investment and 45 blocks of blight removal, including 200 new residences, in a bankrupt city. No brainer.

would pay for everything out of pocket.  This is not the way that business works in civic projects of this size.

We also know that when taxpayer money in Detroit is not set aside for a large project of this type, it is often squandered.  In a city so big that you can fit the entire cities of San Francisco and Boston inside of it (both, together), the problems are much more complicated than paying for a couple more police.  You have square miles of the city where one to two families live per block.  In a city with little resources, paying for police to patrol parts of the city where 100 or fewer residents live over a large area is not economically efficient.  However, the law makes it complicated to relocate people into better, denser neighborhoods (not to mention people do not like to leave their homes, no matter their neighborhood and condition).

My Money is on the Illitch’s

There has always been a lot of debate on the benefits of building a new arena, which were hashed out in the late 90s in Detroit with Ford Field and Comerica Park being built.  Feel free to take your side of that debate.  The Illitch family have a long history of investing wisely in Detroit and creating jobs.  In my mind, there are few others I would rather have receiving taxpayer money and using it wisely.

Detroit has seen disinvestment for years.  Any investment this size is necessary for the city.  If it is going to be a new hockey arena, what better a place than Hockeytown?

The NHL regular season schedule was released on Friday. Check out our partners at TiqIQ for the best deals on Detroit Red Wings tickets for all 2013-14 games.