Do the Canadiens have a chance to win the series against the Rangers without Carey Price? Short answer, no. [Grantland]

The game two loss wasn’t totally Dustin Tokarski’s fault. But maybe a little. On at least one goal. [CBC] 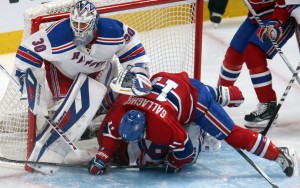 Lost in all the goalie controversy is the fact that the guy on the other end is playing pretty darn well. [CBS Sports]

Could the Oilers be interested in Matt Niskanen? [Vavel]

The Vancouver Canucks appear close to hiring Jim Benning as their next GM. [TSN]

But are the Penguins after the same guy? [Vancouver Sun]

Whoever is in charge may not have to worry about losing Ryan Kesler. [The Province]

The Anaheim Ducks re-signed their GM to a new contract. [Sportsnet]

The possibility of Wayne Gretzky and/or Doug MacLean heading to the Capitals. [Puck Daddy]

Deciding whether or not Jonathan Toews is better than Sidney Crosby. [National Post]

A hockey player may have dove to draw a penalty? Say it isn’t so. [ESPN]

And finally, the Kings and Blackhawks are having a little contest on Twitter. [NBC Chicago]