Somebody needs to tell Nazem Kadri that playing well for half a season doesn’t make you worth $5.5 million dollars. [Sporting News]

Kadri isn’t the only RFA the Leafs can’t seem to find common ground on. [Philly.com]

Toronto will have a little more cap space after defenseman Ryan O’Byrne left for the KHL. [Pro Hockey Talk]

An interesting look at earning big money contracts, as Corey Crawford did this past season. [Puck Daddy]

However does NHL commissioner Gary Bettman put up with the constant booing and hatred from fans? This salary probably helps. [Canoe]

Carey Price sacrifices his honeymoon to play ball hockey with Team Canada. [Habs Inside Out]

It says a lot about the NHL award voting when the Norris Trophy winner isn’t a lock to make the Olympics. [A Winning Habit]

Peter Chiarelli might be the best GM in hockey. The Bruins certainly think so. [The Hockey News]

How will the Lighting fare in the Atlantic/Florida division? Hint: probably not well. [TBO] 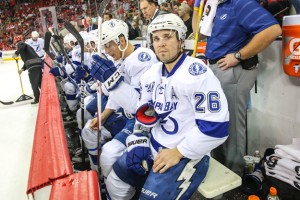 It would be cute if three of the Staal brothers made Team Canada. Not likely to happen, but still a cute idea. [TSN]

Ryan Nugent-Hopkins takes to the ice, but there’s no indication when he will start his season. [Edmonton Journal]

Guillaume Latendresse is without a contract but received an invite to the Phoenix Coyotes training camp. [NHL]