Isles in Position to Make Deals

The New York Islanders will approach the 2015-16 season as a talented young team trying to take that next big step. Last season we saw a talented young Tampa Bay Lightning team go out quietly in the first round of the NHL Playoffs. This season they are in the Stanley Cup Finals. The Islanders who played well in the first round of the playoffs, but lost to the Capitals in seven games, want to be the Lightning next season. Like Tampa, the Islanders are a very talented, deep young team. With an add or two this summer, New York could be considered one of the top teams in the East going into next season.

I believe the Islanders should follow the road map they used last September during training camp. At the end of camp New York used their salary cap flexibility as a major weapon and were able to add Johnny Boychuk from the Bruins and Nick Leddy from the Blackhawks. The total player cost for the Isles were two second-round picks and a very good prospect. I think the Islanders should follow the same script and engage in serious trade talks once again with the Boston Bruins and Chicago Blackhawks.

The Bruins are in one of the worst positions in the NHL when it comes to their salary cap. Boston already has $64 million committed towards next year’s cap. Gary Bettman recently said next year’s cap ceiling will be slightly over $71 million. The Bruins still need to add some players to their lineup and that $64 million does not include Dougie Hamilton’s contract as he is a restricted free agent this summer. The price for the 21-year-old Hamilton will be a lot higher than what New York paid last year for Boychuk. In fact, the price will be very expensive for the Islanders or any team trying to acquire Hamilton. But the Islanders have the cap space and cap-friendly contracts on young players with high ceilings that they can dangle in a trade. That is why the Islanders are a perfect fit for the Bruins. How does top prospect defenseman Griffin Reinhart (who is ready to start his NHL career) and Anders Lee (25 Goal Scorer) for Dougie Hamilton sound for both organizations? If New York could add Hamilton their top four defenseman would be Boychuk, Leddy, Travis Hamonic and Hamilton. The Islanders could round out their defense with talented youngsters on the ready in Ryan Pulock and Scott Mayfield.  Hamilton, like the Islanders, is ready to take that next big step and both of them doing it together makes a lot of sense. 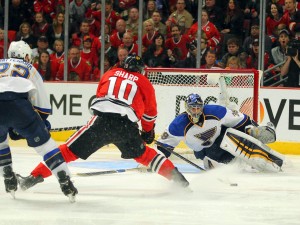 The Hawks are probably in the worst position in the league in terms of the salary cap. Like the Bruins, Chicago has $64 million committed to the cap next season. But that $64 million only covers eight forwards, three defenseman and the goalies. Moves must be made by Chicago to free up cap space in a very big way. Moving the 33-year-old veteran Patrick Sharp and his $5.9 million cap hit makes all the sense in the world for Chicago. Sharp is signed for two more seasons. Because the Hawks are in such poor salary cap position and Sharp is not coming off a great statistical year, the trade price for him should not be as high as one would think. Plus, Chicago is probably going to be looking for a pick and a prospect for Sharp because they can’t afford to take any salary back which would go against their cap. Keep in mind forward Brandon Saad, who is an RFA after this season is not included in the Hawks $64 million salary cap number. Putting a veteran goal scorer like Sharp with John Tavares and adding a Stanley Cup winner to that young locker room feels like a Home Run to me. Or should I say hat trick?