The entire NHL has been made aware by the agent of Jonathan Drouin that a trade away from the Tampa Bay Lightning has been requested. Scouts and front office types have been adding to their travel miles programs in the last two weeks. Here is why they should stay home this week and in the coming weeks.

It is a vast understatement to say that the Lightning have struggled halfway through this current NHL season. The longest winning streak for them this season is four. On two other occasions, the Lightning has put together three consecutive victories. Failure to string together more wins has challenged the mettle of this team.

On the plus side, with the exception of one four game slide in which they lost every game, the team has avoided any extended losing streaks. It has certainly been a roller coaster kind of year so far in the 2015-16 campaign for the defending Eastern Conference Champs.

On their recent four game road trip, they won the last three which moved them into one of the two wild card playoff spots. Finally, many of their fans must have thought. The Lightning had been on the outside looking in, 11th place in an eight team race for the post-season just a short week ago. To add to the bumpy up and down season, the team’s locker room has been said to have been infiltrated with not one, but two potentially large distractions.

Unless you have been incommunicado from any NHL news, you know that the Steven Stamkos contract negotiations have created its own rumor cottage industry. If that wasn’t sufficient temptation to knock the Lightning players off their game, the news about a couple weeks ago that Jonathan Drouin wants out of the organization could have pushed them over the edge.

Drouin, seemingly angered by an assignment to the Lightning AHL affiliate in Syracuse, had his agent alert the media that a trade request was made to the team by their 2013 first round draft pick. In his first game with the Crunch, Drouin scored two goals. Okay, so maybe the young man is putting all distractions aside. Alas, he has since been held both scoreless and pointless in the four games since. Speaking of pointless, the rumors about what team is going to trade for Drouin are actually surpassing the rumors about whether or not Stamkos will stay or go. 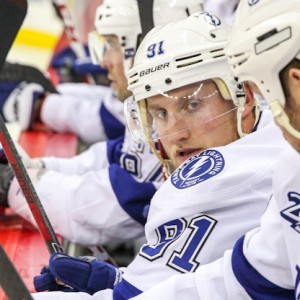 On some cross rumored universe, there are a handful of completely unsubstantiated reports of trade packages involving Stamkos and Drouin. However since so many knowledgeable hockey scribes have weighed in on L’AffaireDrouin, here are my two cents about what Lightning General Manager, Steve Yzerman will do with the enigmatic young forward. Before we explore this scenario let me lay down some of the particulars of Drouin’s current contract.

Drouin is on year two of his entry level contract. He is locked by the Tampa franchise for the remainder of this season as well as all of next season. At that point, Drouin will reach restricted free agency status. Means that Yzerman can meet or exceed any offers Drouin may receive at that time. If this was a poker game, Yzerman is holding all the cards. Not only is he holding all the cards, he has the biggest pile of chips.

Yzerman has already stated that he will only deal Drouin if the trade is in “the best interests” of the Lightning organization. Knowing Drouin’s contract situation, any trade would not only have to be for a prospect with the upside of Drouin but also has to be a deal where Tampa maintains control of the contract initially for any players they receive in return. With extremely limited cap space, Yzerman cannot trade Drouin one for one for an established player who is more than a three million dollar cap hit.

From Yzerman’s perspective, another impediment to pulling the trigger on a trade is the Tyler Seguin effect. A couple of years ago, Boston had on its roster a young forward who was two years removed from his draft year. The Bruins traded the talented young player and have regretted it ever since. This season Seguin is tearing up the league in Dallas and the Beantown naysayers are left to wonder what if.

Any Drouin trade continues to be on Yzerman’s backburner because of the Stamkos contract. Immediately after the Stanley Cup Final, Yzerman who avoids talking to the press as much as anyone in the NHL, made a point of telling the media that re-signing Stamkos to a long term contract with the team was his top priority. There is no reason to believe that this has changed.

When asked about the ongoing talks recently, Stamkos stated that his desire is to remain in Tampa for the rest of his career. As the trade deadline approaches and with the other big name free agent, Anze Kopitar signing his deal this week, the deal between Tampa and their captain should happen sooner rather than later. All of this makes Drouin an afterthought.

Finally, the key component to finalizing a trade for Drouin is the young player himself. Without a doubt the kid is frustrated. Probably believes he hasn’t been given the opportunity to show his immense offensive talents. As the number three draft two short years ago, his NHL career has been rather stagnant especially in comparison to his fellow 2013 first round draftees.

Nathan MacKinnon, the number one pick that year won the Calder Trophy as rookie of the year in 2013-14. That was the year Yzerman and his staff decided to send the then 18 year-old Drouin back to his junior team in Halifax for the entire season.

To his credit, Drouin tore it up in Halifax but was understandably disappointed at not having the NHL opportunity than MacKinnon and many others in his draft class had. Aleksander Barkov and Seth Jones sandwiched Drouin in the draft as the number two and four picks respectively. Both have played over 150 NHL games while Drouin has not broken the 90 game plateau.

Suffice it to say that Drouin’s trade value is at a low point. The recent demotion, the release to the press of the ill-advised trade request, the organization holding the advantage all have hurt the Drouin brand. He is still just 20 years-old with a tremendous amount of potential. Ah, the P word. Could be a standard for some players to shoot for or the bane of a young players existence.

How Drouin handles playing for the Crunch in Syracuse will determine if and when he leaves the team that drafted him. If he truly wants to be traded, Drouin will tear it up in the AHL. That will solidify his value for the general manager who gets Yzerman to say yes to a trade. If Drouin continues to struggle in Syracuse as he has in four of the five games played, failing to record a single point and it may be a long strange trip for the embattled forward.

A struggling Drouin will not bring the assets that Yzerman needs to make this happen. And if there is a struggle, the team will continue to let Drouin struggle down on the farm instead of Tampa. Who knows, if the kid gets his focus together and begins to light it up, he may be recalled back to Tampa just in time to help the team solidify a playoff spot and quite possibly make a long playoff run.