An exodus of forward talent over the summer raised serious questions about the Anaheim Ducks’ offensive depth going into 2016-17. Just 26 games into the season, the Ducks may have stumbled upon a very exciting solution.

That solution has come in the form of a wispy 2014 seventh-round draft pick by the name of Ondrej Kase. While the hockey world continues to try to figure out how to pronounce his last name, Kase (pronounced “Kah-shah”) is quickly establishing himself as a go-to guy for head coach Randy Carlyle.

Only 21 years of age with just 34 games of American Hockey League experience, Kase has played a brand of hockey that belies his relative inexperience.

Scouts were uncertain what to make of Kase in his draft year. On one hand, he was described as someone who had, “shown complete and utter dominance at the junior level and even had great success in limited time in lower pro leagues.”

On the other hand, he was docked due to his unimposing stature: “He still needs to work on defensive coverage and consistency. Whether he will be able to be effective in the smaller rinks at his size and given his play style is a real question mark. Kase is a real boom or bust prospect.”

He has thanks to a tenacious game, harassing the puck carrier at every turn. To borrow a basketball scouting term, he plays with a “high motor.” He hasn’t necessarily put on a ton of weight since his draft year (currently listed at 170 pounds), instead mitigating a perceived lack of size with top-notch mobility:

Love this shift from Kase. Pressures puck, breaks up chance in d-zone, generates chance the other way: pic.twitter.com/vfePc9xCp7

Kase seems to raise an eyebrow every time he’s on the ice, at times with a gritty defensive play, or a sublime shootout move. The numbers seem to bear that out, as he’s put up some gaudy possession numbers. His impact has spilled over into his team’s overall play as well. The combination of him, Antoine Vermette, and Nick Ritchie has quickly become a very reliable third line for Carlyle. 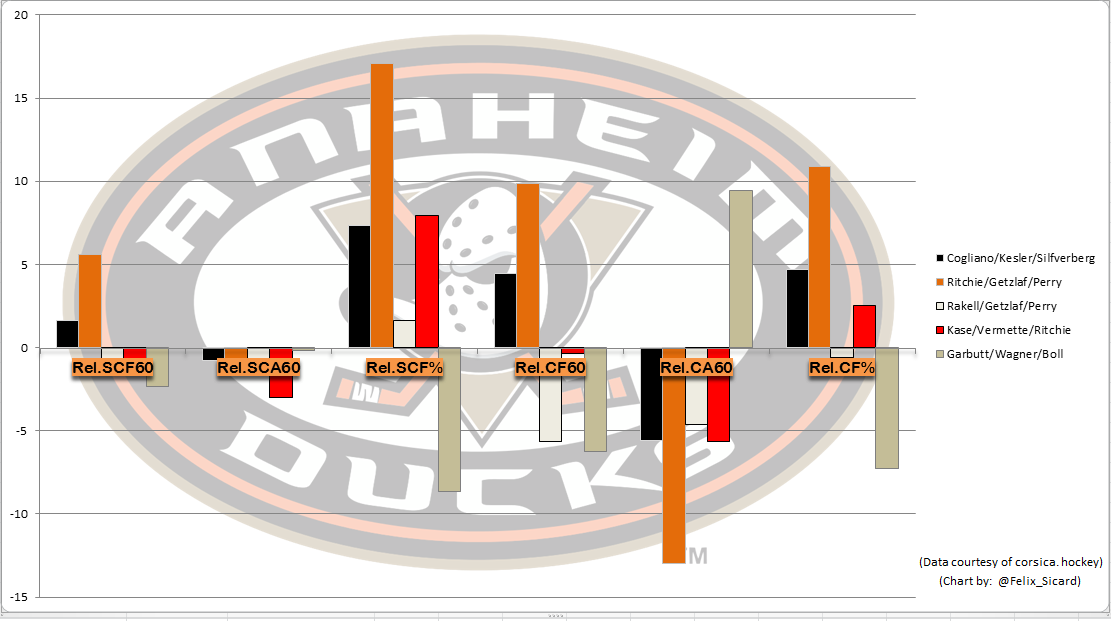 In fact, it may even already be the Ducks’ best defensive forward line. Though the sample is obviously too small to make sweeping predictions, they’ve been Anaheim’s best forward line when it comes to limiting opposing chances per 60 minutes. To boot, they’re also generating scoring chances at a healthy clip. Even if they might be seeing softer matchups due to their third-line designation, that shouldn’t diminish what they’ve been able to accomplish.

It’s no secret that Anaheim leans heavily on Ryan Getzlaf and Corey Perry to generate offense. The two perennial All-Stars are known quantities at this point; they are contributing so steadily that they’re treated as a fait-accompli. Ryan Kesler’s line has been filling up the score sheet as of late, but no team in the National Hockey League worth its salt can hope to win a Stanley Cup without contributions from the bottom two lines. Kase’s arrival onto the scene is bringing the Ducks one proficient skater closer to that elusive second Cup. Not bad for a 205th overall pick.