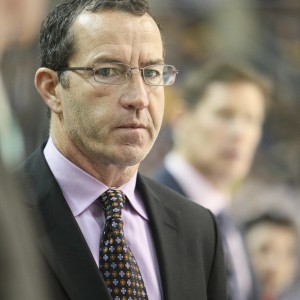 With eight straight losses and 11 in their last 12 games, it looks as if the Florida Panthers are out of playoff contention less than a quarter of the way through the season. Inconsistent goaltending, poor coaching, and an offense that scores under two goals per game on average will do that to you. Factor in their lack of power play production (ranked 29th in the NHL) and inefficient penalty kill (ranked 22nd); there is a huge mess in Sunrise.

The Panthers made some strides earlier in the week with their coaching situation by parting ways with head coach Kevin Dineen. He had one solid season leading the Panthers to a Southeast division title, but everything after has been anything but smooth sailing. According to GM Dale Tallon, this won’t be the last move made.

“This is just the beginning of our changes that need to be made. If our players don’t respond to this, then they won’t be Panthers for very long,” fiery GM Dale Tallon told the media on a call Friday after dismissing most of his coaching staff, including head coach Kevin Dineen.

It’s surely going to be a difficult task for interim head coach Peter Horachek, who will likely be stuck with a group of guys that won’t be playing together for too long. Assuming things don’t get better, which would require a major turn of events, Florida will likely have plenty of guys up for sale. It’s probably safe to say Aleksander Barkov, Jonathan Huberdeau, and a couple of other young guns won’t be going anywhere. The rest of the roster is likely fair game.

“We’re trying extremely hard every day, numerous phone calls with numerous teams,” said Tallon. “Hopefully something will hit in the near future.”

The Panthers are 3-10-4 on the season and find themselves in a familiar position: the bottom of the NHL standings. There really isn’t anyone on the team you can blame for the lack of success this season because every aspect of the game hasn’t been clicking. It’s easy to blame the coach for doing a poor job of molding his guys together and Tallon definitely made the right decision letting Dineen go. But it’s not like the Panthers don’t have talent on their roster. Kris Versteeg, Tomas Fleischmann, Brian Campbell, and Tomas Kopecky are all veterans who have had success in the NHL.

It’s just really tough to see a group of talented guys play as poorly as the Panthers have been playing this season. As Tallon is indicating that he plans on rebuilding his roster moving forward, it seems as if the Panthers have been rebuilding since 2000. They’ve made the playoffs just once since then, which is worst in the NHL in that time frame.

The attendance in Sunrise has also ranked towards the bottom of the league, and with how the Panthers have performed as a franchise since the days of Scott Mellanby and John Vanbiesbrouk, it’s not surprising fans aren’t willing to spend the money to watch their team live.

Barkov and Huberdeau are certainly great young guys to build around and it’s not a reach to say the Panthers will acquire another young stud in the upcoming draft. But it’s going to be interesting to see how this team moves forward with roster decisions. They obviously need better goaltending. A minus-26 goal differential through just 17 games is just unacceptable.

The season is still very young and no one knows how Horachek will fare as head coach because this is his first stint as a bench boss in the NHL. Prior to joining the Panthers organization as head coach of their AHL affiliate San Antonio Rampage, Horachek served as an assistant to Barry Trotz with the Nashville Predators. Hopefully he can get these guys on the right track, string together some wins, and ultimately bring a glimmer of hope to South Florida.