A lot has already been said about the aging, underperforming Los Angeles Kings roster, and the path to playoff contention is only going to increase in difficulty for front office newcomers Luc Robitaille and Rob Blake, a first-time NHL team president and first time general manager, respectively. Now that the Kings have overhauled their organizational leadership, the board is set, and the players are at their seats. How the game will play out, though, is yet to be determined. What we do know from Friday’s Las Vegas Golden Knights signing of Vadim Shipachyov, is that Vegas General Manager, George McPhee, plans to make an immediate impact on the landscape of the NHL’s Pacific Division.

“It may have that effect. The allure of coming to Vegas may have just increased.”—McPhee on Shipachyov’s addition attracting free agents.

Seeing the Board: In Check but Not Checkmate

Are, well, the Anaheim Ducks – a steady, consistent franchise who have won the Pacific Division regular season title each of the last five years;

After years of NHL dormancy and top-5 draft picks, have finally earned a seat at the table;

Staged to continue a trajectory of growth as a young, up-and-coming franchise;

Despite an aging roster, have finished no lower than third in the division in 11-of-12 seasons following the 2003-04 lockout;

Despite failing to make the playoffs in five straight seasons following a Pacific Division title in 2011-12, they have a young roster that played near .500 hockey in the 2017 calendar part of the season;

Have made the playoffs just once since joining the Pacific division four years ago, and as THW writer Trevor Beggs outlines, “The Canucks are one month into a two-year rebuild.”

In reality, while the Kings may be heading down that path as well, there is also a quick path towards continued contention.

Since the NHL realignment, the Pacific Division has been the division of youth and potential. Well that potential is coming to maturity, and with an average age of 29.1 paired with years of mid-to-late draft positions, the Kings are now heading in the wrong direction at the wrong time. With the expansion draft looming, and the best defensive roster in the NHL which failed to score the goals required to win hockey games, what is Blake’s first big move?

Well before we can examine the moves Blake might need to make, we first must analyze how he might protect the Kings’ roster in the expansion draft.

It’s a king’s luxury to be protected by two men in full armor. The Kings first move must be to trade the newly acquired Ben Bishop. It’s unlikely that any team is willing to trade an impact player for an expiring contract, but the Kings would certainly benefit from building organizational depth through prospects and draft picks. The Ontario Reign were too full of older, past-prime ex-NHL players this past season. Blake must turnover the Reign roster moving forward to ensure the Kings don’t miss a beat should the injury bug hit the Kings as it has previously.

Sacrifice a Pawn or Two

If I’m Rob Blake, I’m selling McPhee on a trade for Brayden McNabb, Nic Dowd, and a future draft pick package (maybe: 2017 third-round & 2018 fourth-round from Montreal). In return, I’m asking for a lower draft pick (2018 Sixth Round), and an explicit agreement not to take Derek Forbort or Jordan Nolan in the expansion draft. This would allow for Blake to choose the 7-3-1 option and still meet all of the draft’s exposure requirements. Following this trade, Blake’s protected list would look like this: 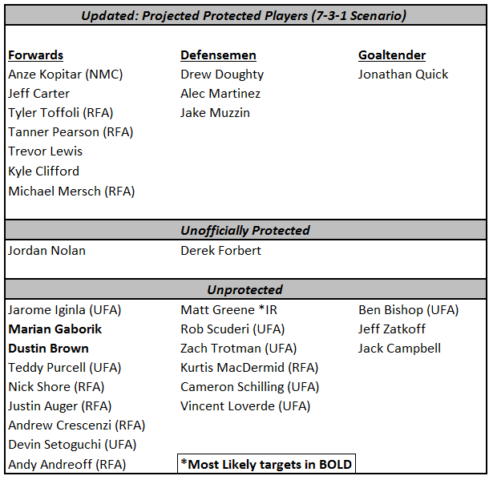 The Stalemate with Brown

Of course the Kings have to prefer, at this point, to see themselves removed from the responsibility of Dustin Brown’s contract. McPhee, heading an expansion franchise, is unlikely to take an aging 35-year old Marian Gaborik, who has four years left on his deal. If I’m McPhee, and looking to compete as quickly as possible, I’m also looking to select potential impact players from my division rivals, while using eastern conference teams to fill out the bottom of my roster and provide AHL organizational depth. Although McPhee constructed teams like to play fast, and Brown doesn’t quite fit that description, he is still a two-time Stanley Cup winning captain that will fit in nicely on a third line, while playing with a chip on his shoulder against Vegas’ new division rival.

To this writer, it is absolutely essential that Blake make a deal as the one outlined above. It’s the foundational move for creating an ability to rebuild the franchise through free agency this summer, and to putting a team on the ice that newly promoted John Stevens can actually produce immediate success with. Blake understands that the Kings must build from the backend out, and making a deal to lock up the team’s top-four defensemen should be a priority.

Our GM Rob Blake talks to @Patrick_ONeal about the hiring of our new head coach via @FoxSportsWest … https://t.co/nhsv0qPN0x

In this scenario, Blake provides McPhee with literally only two viable options – to take Dustin Brown or Marian Gaborik– while locking up the Kings’ core four defensemen and youthful forwards. With Vegas likely taking Brown, Blake would have moved the contract of a player who must be unhappy with his position in the organization following last season’s stripping of his captaincy. More importantly, he’d have cleared up enough cap space to not only re-sign restricted free-agents Tanner Pearson and Tyler Toffoli, but to still have enough left over to make a splash in free agency by targeting perhaps a T.J. Oshie, and/or a puck moving power-play defenseman such as a Justin Schultz. It has been reported, though, that the Kings are close to signing KHL all-star defenseman, Oscar Fantenberg. Then he could fill out the roster with some additional youth like Michael Mersch, Alex Iafallo, or Adrian Kempe.

Although Blake has already said he wouldn’t, imagine that he considers utilizing one of his buyouts on the contract of aging and injured Marian Gaborik. Instantly, the Kings have the cap space to bring in two top unrestricted free agents, and still sign two more depth free agents. In just one summer, he could remove the Kings from the depths of despair, reverse their momentum and take the offensive in the Pacific Division chess match.

Without the foundational move of trading McNabb to Vegas in exchange for not taking Forbort and Nolan, the Kings will be all but forced to choose the 4-4-1 protection package due to their cap situation. In this scenario, Vegas could select a player like Trevor Lewis, Mersch or Forbort. Then, following the re-signings of Toffoli and Pearson, Blake would have approximately seven million dollars to spread amongst six players still needed to fill out the roster. This would leave the Kings with nearly no ability to make any sort of splash in the free agent market.

The Kings could still utilize a buyout on Brown or Gaborik – most likely Brown – and could also bury about half of Matt Greene’s contract. This would open an additional $7 million, allowing for about $14 million to sign eight players. This is certainly much more tenable, however, given this year’s current free agent landscape, the Kings would still be hard-pressed to achieve the team’s goal of increasing scoring potential, while simultaneously getting younger and maintaining their position as the top defensive team in the NHL.