The Toronto Maple Leafs are in Raleigh tonight to take on the last placed Carolina Hurricanes (yes the Canes even sit behind the Edmonton Oilers).

The Leafs are on arguably their hottest streak in recent memory and are quickly climbing the totem pole that is the Eastern Conference standings, so tonight’s contest should be a walk in the park for the Buds. However, in the past the Canes, despite failing to make the playoffs since 2009, have given the Leafs troubles.

The Hurricanes have taken four of the past six games against the Leafs dating back to 2013. And though Carolina may already be stitching McDavid jerseys for sale next season, the fact is when looking at the numbers, the under-achieving team may be able to provide some pushback tonight.

The Maple Leafs give up the fourth most shots per game this season.(John E. Sokolowski-USA TODAY Sports)

The biggest stat that sees both teams on two opposite sides of the scale is shots against. The Maple Leafs historically have been known for giving up tons of shots to the opposition and this year is no different. The Leafs currently give up the fourth most shots per game in the NHL, 33.8, which oddly is an

improvement from last season where the team lead the league in that category. Meanwhile the Canes are oddly giving up the fifth fewest shots per game at 27.8.

With these numbers considered it might not be too shocking to see that Carolina’s possession stats are far and away better than the Leafs’. The Canes currently have the ninth highest Corsi-for and Fenwick-for percentages at 52.3% and 51.9% respectively, while the Maple Leafs sit 27th in both categories. What seems to be the Achilles heel for the Hurricanes is that they have the worst team shooting percentage at 5-on-5 while the Leafs have the second best.

Carolina’s power play is sits in the middle of the pack in the league at 15th connecting on 18.4% efficiency and their penalty kill sits 12th. The Leafs are just slightly better in both categories at 10th on the PP and ninth on the PK.

Where the Leafs Thrive 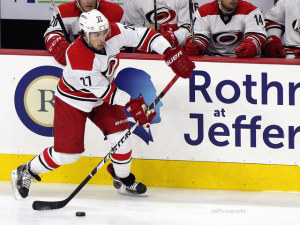 Justin Faulk leads the Hurricanes with 17 points in 30 games this season. (Amy Irvin / The Hockey Writers)

Carolina’s top scorer is defenseman Justin Faulk who has 17 points on the season through 30 games. Meanwhile the Maple Leafs have six skaters on their roster with higher totals. Offense or lack-there of is not bailing out the team’s lackluster goaltending.

The Maple Leafs have won six straight while the Canes have dropped six straight. And while the recent trend suggests a Leafs blowout win, Leafs should never get too comfortable because they have always failed to sustain success. While the Leafs lone regulation loss in their last 10 games came at the hands of the New Jersey Devils who sit just two spots ahead of the Canes in the East, a game won while missing stars Jaromir Jagr and Patrik Elias. So for Leaf fan, buyer-beware.