WARNING: What you are about to read is what should become a regular piece of mine, looking at all eight of the Metro division teams and some notable stats and numbers along the way. I know you were told there’d be no math. Stay with me: 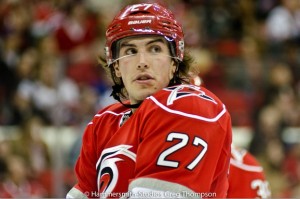 That’s the number of times Carolina Hurricanes’ defenseman Justin Faulk has scored double-digit goals–scoring 15 a season ago. It’s also the number of times the 23-year-old blueliner has scored over 40 or more points. That might change though. Already Faulk is on pace for a good one. Five goals and four assists in 14 games has him on pace to surpass his career-high 49 points from last season. One reason for his early success might be 51 shots on goal, which leads all ‘Cane players and is second-highest among league defenseman–only San Jose’s Brent Burns has more. There may not be a ton to like about the Hurricanes, who currently occupy seventh place in the division with a 6-8-0 record, but Faulk’s numbers (excluding plus/minus) are set to be noteworthy.

That’s the number of New York Islanders’ home games this season with an attendance of 13,197 or more. Through its first 10 games at the Barclays Center in Brooklyn, the team has averaged an attendance of just over 12,000 fans. The arena, that seats 15,795 has hit the 15k mark once–opening night on Oct. 9 versus the Blackhawks. Meanwhile, just two games cracked the 13k mark this season–both losses versus the Bruins. The less than stellar numbers come after the Nassau Coliseum’s farewell season saw overwhelming support. The product, that went all the way to game seven of the first round of the NHL playoffs, remained in tact for the most part. It’s safe to say the 50 mile trip from Long Island to Brooklyn hasn’t exactly sold well with fans. The season-low: Thursday, Oct. 15 vs. Nashville (10,542). The next Islander home game is Monday, Nov. 16 versus the Arizona Coyotes–which could draw an even smaller crowd.

That’s the number of games New York Rangers’ forward Rick Nash has points in. Despite having four or more shots on goal in six of 12 games, the $7.9 million-dollar-man has been limited to just one goal and five assists. In fact, his lone goal scored on Oct. 22 wasn’t even on one of his four shots registered on goal versus the Coyotes. A goal was awarded to Nash after he was hooked while driving to an empty net late in the game. People don’t ask how–they ask how many, but in this case they’re not smiling about either. The forward missed two-straight dealing with a back injury, but is expected to return to action on Tuesday when the Rangers host Carolina. Fans shouldn’t hit the ‘panic’ button yet. After all, Nash managed a career-high 42 last season and slow starts for division stars is actually pretty trendy–more on that soon.

That’s the number of games this season Columbus Blue Jackets’ defenseman Jack Johnson finished with a positive plus-minus rating. The Blue Jackets went winless in their opening eight games and are sporting a 4-11-0 record as of Nov. 10. So who’s really surprised that Johnson, one of the leaders in time-on-ice has gaudy numbers? Maybe this is just the only transition I could think of to talk about the American defenseman, who has represented the United States on numerous occasions including at Vancouver for the 2010 Winter Olympics. Something though has changed since then. He has just two points (1g-1a) in 15 games and has taken a few giant steps back. In fairness, the entire team has and new head coach John Tortorella has familiarity at the international level with Johnson–so he’ll have every opportunity to reemerge amidst some potential looming legal and financial troubles. If he can’t, then he picked a rough time to have an off season as this is the final year of his contract.

That’s how many games it took for Sidney Crosby of the Pittsburgh Penguins to get on the board for the 2015-16 season. A three-point game versus the Florida Panthers on Oct. 20 saw Sid tally a goal and two assists, including a secondary assist on the game-winning goal in overtime to defeat the Panthers 3-2. Unfortunately, that’s barely half the story. Sid’s slow start hasn’t exactly figured itself out. The Pens’ star and face of the NHL has points in just four games this season. The fans in Pittsburgh are (patiently) waiting for the rust to wear off and for a guy that’s scored 100+ points five times in 10 season’s, it seems likely that he’ll start to catch fire soon. But if it continues, Sid might find himself getting the type of media pressure that his new teammate Phil Kessel knows all too well.

That’s the number of shots on goal Philadelphia Flyers’ forward Jakub Voracek has in four games this season. Number of goals: 0. Voracek, 14 games into his fourth season with the Flyers, is still chasing that elusive first goal on the season. So far, he’s been held to just five assists. Despite amassing a team-leading 54 shots on goal, he’s been held in check–a far cry from his 81 point explosion last season. Like Crosby and Nash (where’s Stills?), there’s no need to hit the ‘panic’ button just yet and all three players have given enough reason to believe whatever funk they’re in will soon end. For the Flyers though, they might be more interested in six–the number of regulation losses the club currently has, being outscored 24-7 in those contests.

That’s how many power play points New Jersey Devils’ forward Kyle Palmieri has scored in his first 14 games with his new team. Palmieri, who scored the Devils’ game-winning goal on the power play in overtime to knock off the Canucks 4-3 Sunday night, was acquired from Anaheim in the off-season to help with the team’s woeful offense from a season ago. So far, so good. His seven points (3g-4a) on the man-advanatage leads the league’s ninth-best power play and has helped the Devils get off to a surprising 8-5-1 start. If he can continue his efficiency on special teams, Ray Shero’s first real move as New Jersey’s GM in acquiring the 24-year-old for a pair of draft picks will prove to be a steal.

That’s the number of goals and assists Washington Capitals’ Alexander Ovechkin, no. 8, has this season. This one was almost too easy. Ovechkin has 16 points in 12 games as the Caps are soaring to a 10-3-0 start to the season. On Saturday, Ovechkin tied Hall of Fame inductee, Sergei Fedorov for most goals scored by a Russian-born player. His stellar game versus Toronto saw him record eight shots on goal (see a theme yet?) as the Caps handed the Leafs a 3-2 shootout loss, Ovechkin tallied the shootout’s only goal. He’s played in all but one of the Caps’ games this season. He was a healthy scratch on Oct. 15 after arriving late to the morning skate. The team lost 5-0 to the San Jose Sharks. Ovechkin cited an alarm clock issue as the reason for his tardiness. Approximate time? You guessed it.