The Rockford IceHogs (American Hockey League affiliate of the Chicago Blackhawks) just swept their weekend series against the Lake Erie Monsters. The back to back victories on Saturday night and Sunday afternoon moved the IceHogs record to 32-14-7-4, good for 75 points in the Central Division of the Western Conference. While they share the points lead in the division with the Milwaukee Admirals, Rockford occupies the top spot by virtue of a better winning percentage (.658 to .647).

Sure, first place in the division is nice, however, the real story this past weekend was IceHogs Goaltender Michael Leighton. He back-stopped the team to a 5-0 victory Saturday night, good for his 46th career shutout and 5th this year. With that whitewash, Leighton set the American Hockey League’s all-time shutout record.

HE'S DONE IT! HE'S GOT THE RECORD! Michael Leighton gets shutout #46 and sets the all-time AHL record! Hogs win 5-0! pic.twitter.com/iti7xRE6gd

With a 5-0 win over LE, Leighton gets shutout #46 & breaks Johnny Bower's record to set the AHL all-time record! pic.twitter.com/XVwzYLaKX6

The IceHogs’ primary goaltender has been great all year, compiling a record of 27-6-3-5. Leighton’s save percentage is .920, while his goals against stands at 2.38. Considering the amount of players shuffled back and forth between Rockford and the Blackhawks (12 and counting), it’s amazing Leighton has been so solid in net.

Yet, the story doesn’t stop there, nor should it. Personally, I cannot fully comprehend how he gets motivated to play for the Chicago Blackhawks top affiliate considering what Patrick Kane and the Blackhawks did to Leighton in the 2010 Stanley Cup Final.

That’s right, Leighton was the Philadelphia Flyers’ goalie that gave up the sudden death goal to Kane, allowing the Blackhawks to hoist the Cup.

The irony doesn’t stop there either. Michael Leighton was originally drafted and signed by the Blackhawks in the sixth round of the 1999 NHL Entry Draft as the 165th overall pick. Unfortunately, he never really caught on in Chicago, and was traded to Buffalo in October of 2005. Then things really got crazy.

Leighton signed as a free agent with the Anaheim Ducks on July 13, 2006. Following training camp, he was assigned to their AHL affiliate, the Portland Pirates. When both Ilya Bryzgalov and Jean-Sébastien Giguère were injured, the Ducks recalled him on November 27 to start a game. However, Leighton was then claimed off waivers by the Nashville Predators. After appearing in just twenty minutes of one game with the Predators, Leighton was again placed on waivers and this time was claimed by the Philadelphia Flyers on January 11, 2007.

After playing four games with the Flyers, Leighton was once again placed on waivers. He was then picked up by the Montreal Canadiens, but he finished the season without playing a game for his new team. Montreal then traded him in the off-season to the Carolina Hurricanes. Leighton was the Hurricanes’ backup goaltender behind Cam Ward, during the 2008–09 season. He appeared in 19 regular season games but never got the opportunity to play in the playoffs, when the Hurricanes advanced to the Eastern Conference Finals. On December 15, 2009, Leighton was again claimed off waivers, this time by the Flyers. Then came Game Six of the 2010 Stanley Cup Final.

In August of 2014, the Blackhawks signed Leighton to a contract. Unfortunately, he was ultimately sent down to Rockford, where he remains today. So now he has come full circle from where his career began. If karma has a sense of justice, Leighton will somehow find his way back up with the Blackhawks and win the Stanley Cup with a shutout. Think about it for a moment. What a great ending that would be, as the goalie who gave up the goal in overtime to lose a Cup, saves the day and wins a championship. No, I am in no way suggesting he play in front of Corey Crawford. But if ever a player deserves a second chance to win the Stanley Cup, it’s Leighton. Until then, he will continue to let his play do the talking in the American Hockey League.

The AHL spotlight is all yours Michael. Go ahead and “Hog” it for a little while. You’ve earned it. 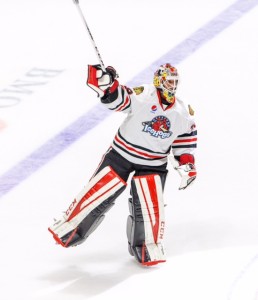