Being a professional athlete or coach comes with a lot of responsibilities. Everything a person in a position like that does is seen or heard by thousands, and in some cases millions, of people; everything is scrutinized. Though, for the most part, coaches and players keep their cool during these tough situations, some eventually snap.

From temper tantrums on the ice to post game rants to the media, these meltdowns provide some of the best television and sound that hockey fans can be given. There are plenty to choose from, and I know many will have their own that stand out more than what you see below. However, these are my top 10 most memorable hockey meltdowns.

Feel free to let us know what your favorite meltdown is in the comment section below.

After a Buffalo Sabres 3-2 victory of division rival Toronto during the 2005-06 season, Sabres head coach Lindy Ruff makes it known how he feels about Maple Leafs agitator Darcy Tucker.

No. 9: Alfredsson Loses It

Former Ottawa Senators captain Daniel Alfredsson is usually the epitome of calm. However, sometimes you lose your cool when things just aren’t going your way during a game.

With the game tied in overtime, Devils legend Martin Brodeur was bumped by Jussi Jokinen just before a Hurricanes shot from the point would beat him with 0.2 seconds remaining in the frame. After the goal was held up, Brodeur loses it after believing he was interfered with. It may just be my opinion, but it wouldn’t have happened if Brodeur had stayed in the crease. 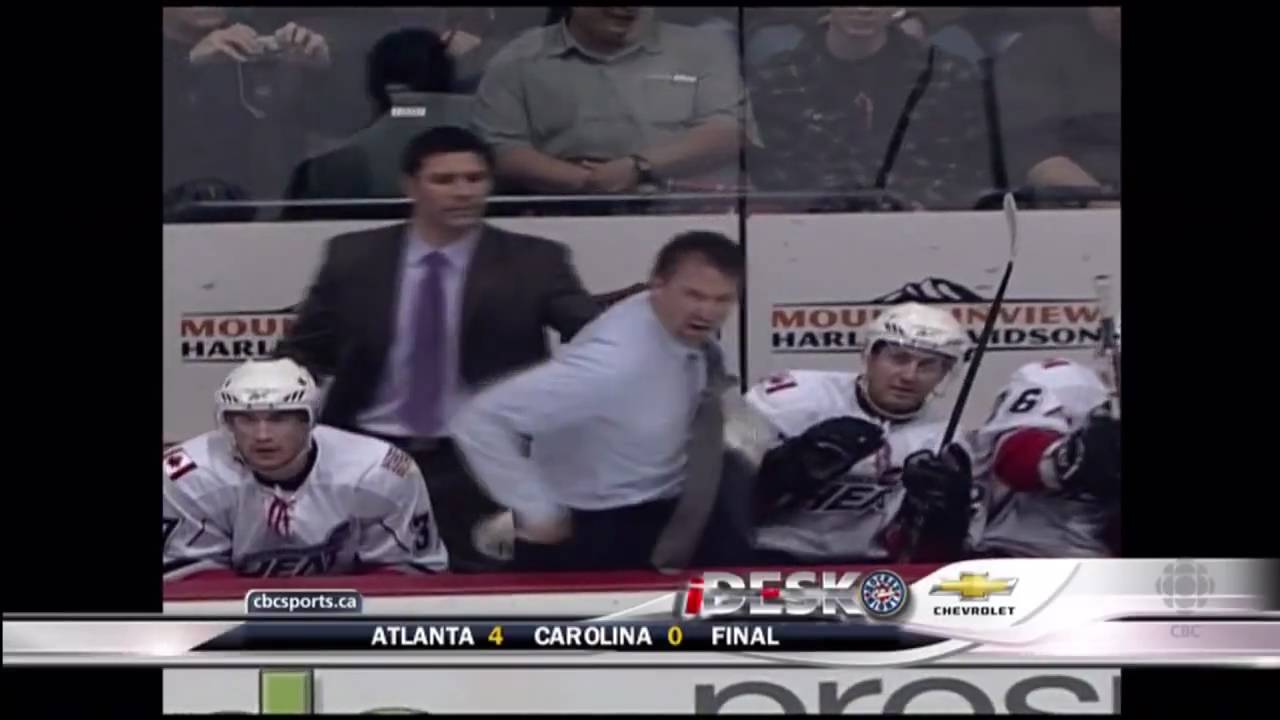 We all know about the Buffalo/Ottawa brawl from 2007 that started after Buffalo captain Chris Drury was hit in the head by Senators forward Chris Neil. What many seem to overlook, however, is what happened between Lindy Ruff and Bryan Murray during the madness. I think what makes it even better is the fact that Rob Ray, who played for both organizations, was standing between the two.

Jim Schonfield wasn’t a man to shy away from wearing his emotions on his sleeves. After a tough loss to Boston, Schonfield had some choice words for the officials, including one of the best lines of all time.

No. 3: The Bruins Aren’t Fan Friendly

Ahh, Mike Milbury and the famous shoe. Many know about what he did, but most don’t know how it happened. After a Bruins win over the Rangers in Madison Square Garden, a scuffle broke out along the boards. A Rangers fan then decided to take a stick from a Boston player, and start swinging. This lead to a sea of bruins jerseys entering the stands to fight with fans.

Tuukka Rask’s temper has flared up in the NHL quite a few teams throughout his young career, but it wasn’t something that just started out of nowhere. After losing to the Albany River Rats in a shootout, Rask took his anger towards the officials out on his stick, the boards and a crate.

This isn’t a fight, nor is it a rant. What it is, however, is one of the more significant moments in hockey history. After being left in by coaches during a rout by the Detroit Red Wings, Roy’s growing frustration with the organization hit its boiling point. When he was finally pulled, Roy told Montreal management that he would no longer play for the Canadiens. It may not be eccentric, but when arguably the best goaltender of all-time says he’s done with the most successful franchise in league history, it has to go down as the top “meltdown” of all time.