Hockey. There are not enough words to describe what it means to me. Ever since I can remember I’ve been a diehard hockey fan. When I was little, whenever I had free time I would be playing road hockey or mini sticks with my friends. Usually stories like this end with the little boys wish of playing in the NHL coming true. However, as I got older I realized my dream of playing ice hockey would never come true. I was always weaker and slower than all my friends.

I didn’t clue in that I had a disability until I was 9 years old. I would need a walker or a wheelchair whenever I got tired. My parents told me I had something called Duchenne Muscular Dystrophy, a progressive and degenerative muscle disorder. As I matured I began to weaken further. At age 12 I lost the ability to walk and I have been confined to a wheelchair ever since. I never let the fact that I am confined to a wheelchair bring me down. My parents have always taught me to take life as it comes and be happy with what you have. Besides, there have been two important stages of my life that would never have been possible without hockey. At age 9, I was named the ambassador of the Oakville Rangers rep hockey team. I went to every game and tournament for two seasons. Those were two of the best years of my young life. I was given a team jacket and hockey jersey and I felt like I was a player on the team.

When I was 16 I was introduced to the Toronto Power Wheelchair Hockey League (TPWHL). In my second game I got a hat trick, I was hooked. I played two seasons with the Lake Raiders. In my first season I was awarded with the Rookie of the Year trophy. Also in my first season, the league was featured on Hockey Day in Canada on CBC. The two years I spent in the TPWHL were two of the best years of my life. It was amazing to finally be part of a competitive hockey team. 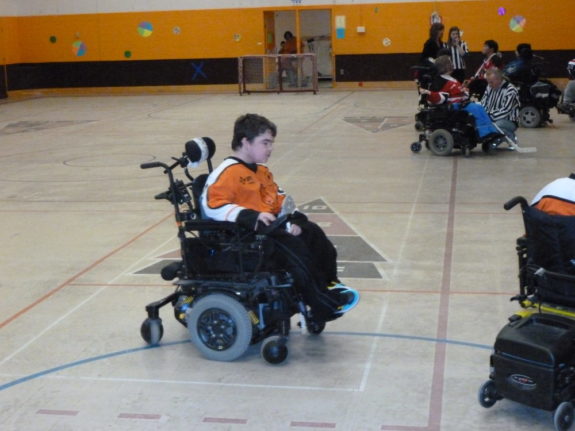 There have also been a few specific days in my life that I also owe to hockey.

During the 2005-06 season I went to Phoenix with the Children’s Make a Wish Foundation to meet the Coyotes and Wayne Gretzky. Unfortunately, the day I went to the game was the day the Rick Tocchet gambling scandal hit. I had made it all the way to Phoenix to meet my all-time hockey idol and I couldn’t because of a silly scandal. I had even brought a birthday present for Wayne, a box of Tim Horton’s coffee and a card. To this day I have yet to meet him. It wasn’t all bad though. I had the opportunity to meet anyone I wanted on the Coyotes. I met Phil Sauvé, Oleg Saprykin, Tyson Nash, Ladislav Nagy, Mike Ricci, and many others. The highlight of the night was meeting Curtis Joseph, Mike Comrie and Shane Doan. I even got to wear Cujo’s mask. It was a dream come true, wearing the mask of one of my childhood idols. Ever since he was acquired by the Leafs, Joseph has been my favourite goalie. 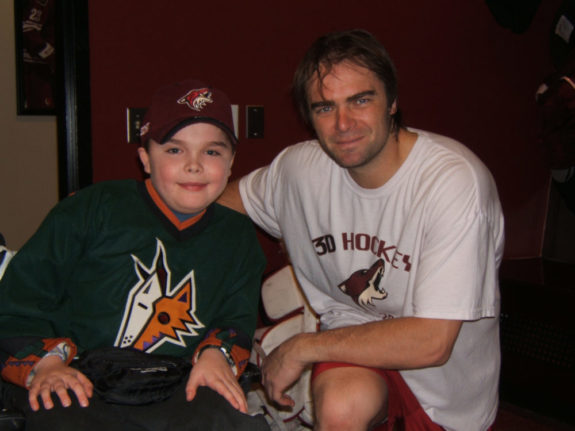 Curtis Joseph and I in Phoenix

At 15, I went to the Toronto Maple Leafs Blue and White game. After the game was over I was taken to the dressing room where I met Mats Sundin, Steve Thomas, Eric Lindros and Ed Belfour. Four of the best players to ever play in the NHL let alone the blue and white. 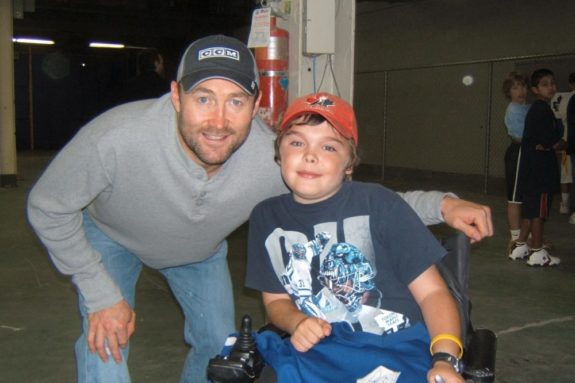 Eddie the Eagle and I

Another important event came in December of 2011. A family friend got me in to contact with someone who owns a private box at the Air Canada Centre. My step dad and I went down to Toronto to watch the morning skate and I met the entire 2011-12 Maple Leafs roster. That night I got to watch the Leafs defeat the Sabres. 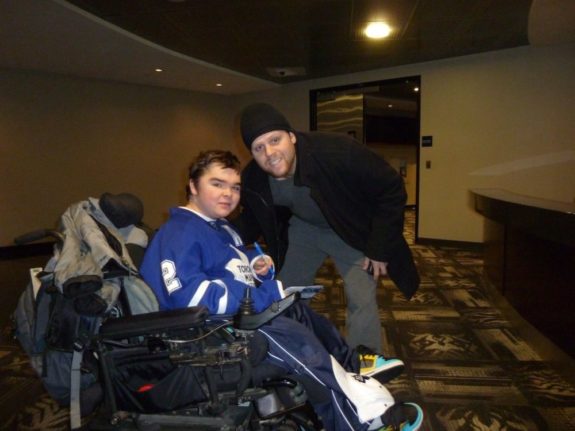 Phil Kessel and I after the morning skate

Despite never being able to skate, hockey has and will always be my favourite sport. I have been blessed throughout my life to meet some of the best players to grace the NHL and thanks to Bruce Hollingdrake I’ve been given my dream job, writing about hockey, the best sport in the world.

Clayton Theriault is a 20-year-old student from Oakville, Ontario, Canada. He is currently in the process of obtaining his print journalism diploma at Sheridan College. He is currently an at-large writer for The Hockey Writers.