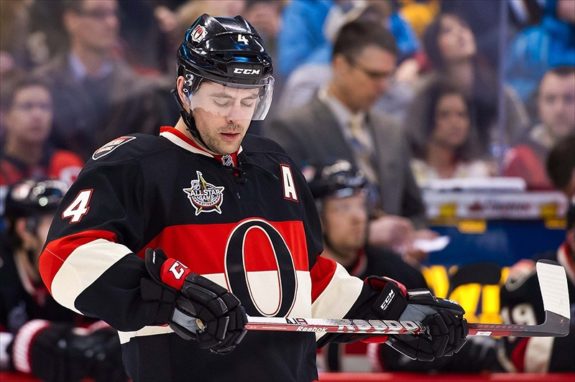 It was June 22nd 1996, the Kiel Center in St. Louis Missouri, when NHL commissioner Gary Bettman stepped to the microphone and announced that the Ottawa Senators had used the first overall pick in the National Hockey League Entry Draft to select defenceman Chris Phillips.  It was a crucial pick for the young re-birth of the franchise, desperately seeking improvement, a “must get right” pick, and the Senators certainly did.  Little did Phillips, the Sens organization and the City Of Ottawa know that more than 16 years later he would still not only be an integral part of the team but a strong fixture in the community as well.

The rugged blue-liner was born in Calgary but raised in the blue collar oil-town of Fort McMurray, Alberta and brings that hard working and honest mentality to his game on the ice and life off of it.  Like many pros he was a prolific scorer in juniors but had to adapt his game at the next level, and Phillips has built his NHL career with a defence first mentality as a long time “shut down” defenceman playing against the other teams’ top players with a little bit of offense sprinkled in.  This was never more clear than his 2006-2007 season, when he posted a career high 8 goals 18 assists for 26 points, with a career best plus 36 rating and helped lead the team to its’ best result to date making it to the Stanley Cup Finals before losing to the Anaheim Ducks in five games.

He’s been the young man on a building squad and now a veteran leader during the “youth movement” of this current up and coming version.  His combination of skill and all-around intelligence for the game has made him an excellent leader and alternate captain for the team and allowed him to remain a top four defenceman even on a young and talented back end in Ottawa.  As the second longest tenured member of the Sens behind only captain Daniel Alfredsson, few players have been more popular amongst the fans and in the city than Chris “Big Rig” Phillips.  His nickname since his junior days “Big Rig” refers to his imposing frame and physical play while paying tribute to his hometown and the oil industry tradition it’s known for.

In the spring of 2012 it was announced that Phillips and a group of partners had joined together to create Big Rig Kitchen and Brewery in Ottawa.  A traditional pub and brewery, it will feature a variety of homegrown beers both on tap and available in bottles, all with the Big Rig name and naturally some memorabilia and tributes to the Sens and Phillips’ career inside.  Phillips has even said he plans to grow some of his own hops and barley on his nearby farm in Manotick, Ontario giving this new venture a truly personal touch.  “When the chance came up to have a beer named after you, and to get this business opportunity, it was near impossible to pass up.  Ottawa is home to me and my family and we plan to stay here,” said Phillips.  It’s been well documented that the Ottawa Senators have a unique and incredibly close relationship with the city and their fans, being the lone professional team in the Nation’s Capital where hockey is king, and an exciting new establishment like this with direct ties to an all-time favourite player only strengthens that bond.  It’s another opportunity to connect with the community and for the patrons maybe the chance of seeing Phillips or some other players as well.

Phillips and his wife Erin, along with their three children have called the City of Ottawa home for the last 16 plus years and although it was really a forgone conclusion, this new opportunity ensures their stay in Ottawa well beyond Chris’ playing days.  It also ensures that there will be Big Rig on ice in Ottawa for years to come, and with his current deal Sens fans will be treated to the original “Big Rig” for at least another two seasons, and they are all looking forward to drinking to success this year.