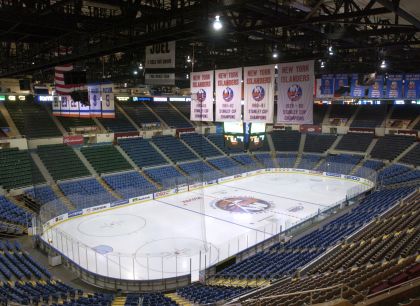 The New York Islanders are 5-2-1 in March, and a significant reason behind that has been the performances of some of the role players and the way they’ve stepped up.

If I had to pick one term that best describes what the line of Matt Martin, Casey Cizikas and Colin McDonald has meant to the Islanders this year, it would be “spark-plug.”

This trio has been steady and consistent at both ends of the ice and are able to give their teammates a boost with their energy, physicality and aggressive style. When a big hit is needed, Matt Martin usually delivers, likewise for both McDonald and Cizikas. The third line has also contributed offensively at key times, providing a lift for the team in that aspect of the game when necessary.

It’s clear these guys have built a lot of chemistry and therefore mesh well together. All three play with an edge, play with energy and play a similar aggressive brand of hockey. The fact that Cizikas and McDonald were teammates in Bridgeport during the lockout certainly helps and is likely a factor here.

They’re able to force turnovers with their hitting and forechecking and, once they do, they often make quick short passes and execute simple passing plays in the offensive zone. At the very least, this allows them to maintain possession and generate some chances. Most of the time, they don’t end up scoring, but they do help set the tone for the next line that comes over the boards.

Martin is absolutely the whistleblower on that line. He is the most effective physical presence on the team and he generally sets the tone with a hit after the puck drops. He’s got some offensive instincts too, though, and there’s a belief among some that, in time, he could even develop into a 20-goal scorer.

Cizikas is a perfect complement to Martin, in that he’s also very aggressive but does more than just hitting. He’s strong on the forecheck, on the backcheck — you name it. He can also deliver the occasional big hit (like the one he doled out on Alex Galchenyuk  a few weeks ago at the Coliseum) and uses his smarts as well as his strength. A natural center playing the wing, Cizikas is underrated as a playmaker and has made several goals happen this year with his hard work behind the net and his passing skills.

McDonald, who centers the trio, is able to be physical and direct traffic. At 28-years-of-age, McDonald is a good mentor for his younger line-mates  He might not have as much upside (either defensively or offensively) as Cizikas or Martin, but he does have a good, quick release; you give him time and space in the slot, nine-out-of-ten times he will score.

Cizikas scored his first NHL goal back on January 29th, when the Islanders were facing the Penguins — in Pittsburgh and on national television. His goal gave the Isles a 1-0 lead in the first period and helped set the tone for the rest of the game. The Islanders defeated the Pens, 4-1.

When the Isles beat Montreal 6-3 at the Coliseum, Martin scored the go-ahead goal in the second period, while McDonald assisted on the very next one. After the Islanders relinquished their 3-1 lead, they tacked on three unanswered goals to re-gain the lead. The third was an empty-netter that sealed the win for New York, scored by none other than McDonald and assisted by Martin and Cizikas.

Trailing the Rangers 2-0 after the first period at The Garden, the Isles needed a lift to help them get back in the game. Enter McDonald, who received a nice pass from Cizikas and beat Marty Biron just 29 seconds into the middle frame, putting the Islanders on the board.They’d knot it up just over six minutes later and wound up defeating the Blueshirts, 4-3 in a shootout.

All the hype usually centers around the top line of John Tavares, Matt Moulson and Brad Boyes, and justifiably so. McDonald, Martin and Cizikas might not score as often as those top guys do, but they’re just as important to the New York Islanders and their success.