Hockey has long benefited from technological improvements in television broadcasts.  High-definition TV, along with then-revolutionary widescreen TVs – improved the home viewing experience. The new proportions of the broadcasts better framed the ice and the significant increase in picture quality made it easier to follow the game.  FoxTrax attempts aside, technology has made it much easier for fans to enjoy games from the comfort of their couches.

The next improvement won’t be in following the players.   It’ll be in nearly becoming them.

Hockey is a game of speed.  It’s a game that, as any fan will tell you, is better experienced at the rink than on the screen.  Thanks to smaller, lighter, faster cameras, watching it on TV can now put you on the ice.

“The [technology] demystifies our game and truly shows what skill our players have,” said Brian Jennings, the NHL’s EVP of Marketing.

It’s worked out well in other sports.  The Tour de France recently allowed bike-mounted cameras, which made for a unque – and frightening – look at the event.  The NFL has allowed for peeks into action on the gridiron during practices.  Arena Football has also embraced the technology.

“This is something that [TV] networks want in their [football] broadcasts,” said J.R. Liverman, founder of NFL-used SchuttVision. “I don’t have a crystal ball in knowing when that will happen. I absolutely believe that this will be integrated into the broadcasts on all levels of football over the next years.”

The NHL needs to be the one to take it one step further.  Instead of just helmet-cam highlights, the league needs to employ these angles live – or nearly-live, via instant replay – into the actual broadcasts.

Helmet Cams in the NHL

We’ve seen limited use of helmet-mounted cameras in the NHL.  The league took advantage of the technology at one of their showcase events – the Stadium Series game between ther New York Rangers and New Jersey Devils at Yankee Stadium.  Referee Wes McCauley donned the camera for the game, giving fans a unique take on an already-unique event.

Teams have also used them in practice, sharing the videos online with fans.  Here’s a look at Washington Capitals development camp from atop the head of forward Nathan Walker: 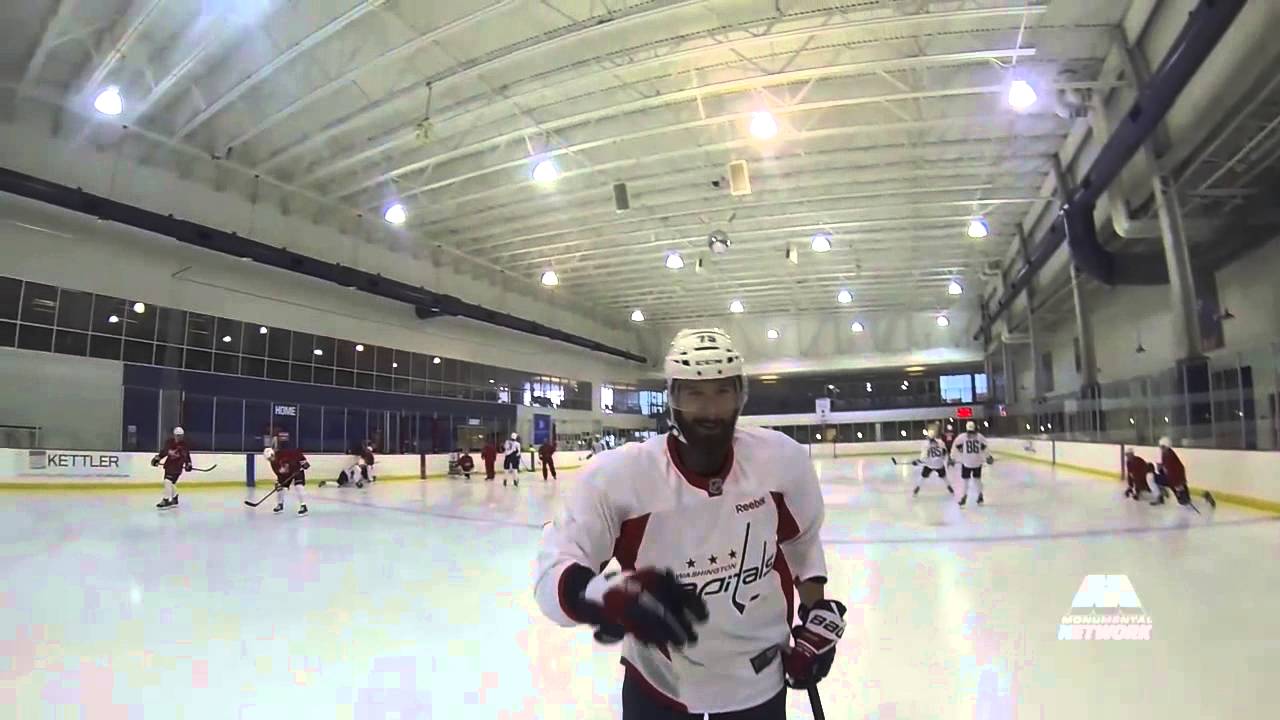 The History of Helmet Cams

The first helmet-cam used for broadcast was worn by marathoner Rod Dixon during the 1985 New York Marathon.  From the Los Angeles Times:

As the field in the New York City Marathon departs from the Verrazano Bridge and heads up 4th Avenue in Brooklyn, a man wearing a hockey helmet and a carpenter’s belt suddenly will burst into the lead pack. He’ll stay with the leaders for about a mile, then drop out. […] Dixon is part of a grand experiment which he feels could have a profound impact on his sport.

I see the race from a runner’s view; most people see it from a spectator’s view. Hopefully, you will be able to see the race from my eyes now,” says Dixon. “You will understand what is going on out there all the time, the positioning . . . looking five or six moves ahead.  I want to tell why a runner looks strong or why he seems to be weakening. You might sit in a studio and see these but you can really only get the feel for it with you are running along with them.”

ABC Sports outfitted Dixon with five pounds of gear for the race. He needed to keep pace with the lead runners while bearing that extra load and also remaining within 200 yards of the broadcast team’s chase vehicle — no easy task.

We’ve come a long way since then.

The Buffalo Sabres premiered a brilliant look at the game of hockey from ice-level with their NHL in 360 exhibition in 2011.

From the New York Times’ coverage of the 2011 event:

“We wanted to give our fans an innovative multimedia experience — something that had never before been done in the N.H.L. We envisioned affixing high-definition point-of-view (P.O.V.) cameras to players’ helmets, while recording the sounds of the game with binaural sound, a dynamic audio recording method that uses two high-fidelity microphones placed seven inches apart to approximate the positions of a human’s ear canals. By combining these two forms of technology, we wanted to give fans a firsthand perspective of how a Buffalo Sabres player sees and hears a game.”

As a one-off, it was great.   As a technology in regular use in broadcasts, it will be amazing.

The NHL realizes the opportunity that exists with helmet cameras.  There’s no better way to convey the speed of the game than by seeing it through the eyes of a player or official.  The league’s also no stranger to strategic partnerships.  They recently signed a deal with GoPro to use helmet cameras in their broadcasts and promos.

While the idea sounds promising, the footage used will be limited to recorded video captured of NHL players shooting, stickhandling, and skating during an off-season media event.

Bringing Fans to the Ice During Live Broadcasts

We’ve seen what helmet-cameras can offer to produced pieces. On-ice angles were used, to great effect, in the HBO 24/7 series.  Presumably, we’ll see them again, on both officials and players, in the upcoming series on Epix.  What we need, though, is to see that point of view during the games.

There’s a huge opportunity to leverage helmet cameras in the National Hockey League.   There’s no better way to highlight the speed and power of the game than to show it from ice level.  The best angle on the action is from the players who are battling it out between the boards.

In Canada, Rogers Sportsnet has started exploring the possibility of employing helmet cams during their broadcasts, which would certainly give viewers another exciting point-of-view.

“It can definitely help the game become even more interesting for the viewer, no question,” said New York Rangers goaltender Henrik Lundqvist.

Whether it’s a skater, a goaltender, or an official, the best way to appreciate the game is through their eyes.  Let’s hope the league will keep working to get us there.