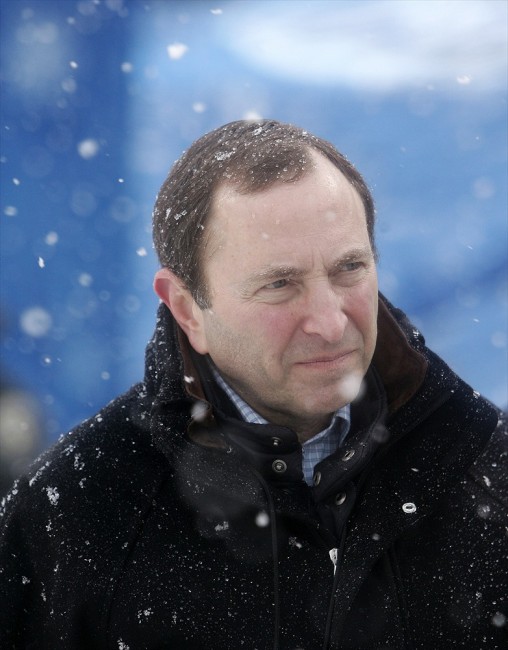 In each case the solutions offered by the owners and players fails to address the real problem, which is the fact that roughly two thirds of the NHL clubs do not generate enough revenue to be profitable.

Poor market choices, sagging fan interest and a global recession have taken their toll in many NHL cities, leaving a number of owners in the red season after season.

The NHL grew it’s revenues from an estimated $2.2 billion to $3.3 billion since the last CBA was put into place. On the surface those numbers look great, but when you consider the Toronto Maple Leafs, New York Rangers, Montreal Canadians, Chicago Blackhawks, Detroit Red Wings, Philadelphia Flyers, Boston Bruins and Vancouver Canucks account for a good chunk of those additional revenues, there isn’t much left for the bottom feeders of the league.

The fact is, most NHL owners cannot afford to share their revenues because they are operating in the red. Are nine franchises supposed to support the other 21? How ridiculous would that be? And how close are some of those money making franchises to losing money themselves?

Clearly, while total revenues are up, the majority of NHL franchises are losing millions of dollars, which goes against every business principle out there. Simply put, owners invest in businesses to make money, not to subsidize their competition.

Under the current business model the NHL is a league full of “haves” and “have-nots”, with very little in between.

Even if the NHL finds new homes for some of the struggling NHL clubs there are not enough emerging markets to fix the problem. Seattle, Quebec City and Toronto have been mentioned as future homes for NHL franchises, but with as many as 20 teams struggling to make a profit how in the world will the NHL ever be a viable/profitable league?

As it stands right now the upper teams are said to be kicking in about seven percent of their profits to the leagues lesser lights. While revenue sharing helps a number of teams, it hardly makes a dent on their losses, which means unless the NHLPA and NHL can come to a well thought out solution many teams will continue to lose money.

Besides, how willing do you think the Maple Leafs, Rangers, Canucks, Canadiens, and Blackhawks, etc. will be to continue to pass along their hard earned money/profits? And why should they have to? Would MacDonald’s ever be willing to subsidize Wendy’s? Should Walmart be expected to fork over millions of dollars in order to keep Target in business? It just doesn’t make sense, and neither does revenue sharing for the NHL.

Revenue sharing does little but mask the problems that many NHL teams are having.

Attendance is down in many arenas. Where the arenas are full many franchises are offering crazy promotions in order to get warm bodies into their rinks. For example, the Columbus Blue Jackets are offering a ticket package to fans that includes any six games— including the season opener, two premium games and three additional regular season games— for as low as $99 per Flex Pack! Plus, if you buy now you will receive a FREE $10 gas card from Marathon Petroleum with each Flex Pack purchased. How is that even profitable? And how can we take the Blue Jackets attendance figures seriously when they are practically giving away seats?

Clearly, the Blue Jackets are manipulating their attendance numbers, which only perpetuates the bigger problem that hockey will never work in a city like Columbus, not profitably anyways.

The problem is, even if the NHLPA got it’s way and had additional revenue sharing, this is not a long term solution. The only long term solution is locating NHL teams to viable/profitable markets, of which there seems to be very few.

Of course, icing a winning team always goes a long way in attracting the fans, but with so many teams losing their star players to free agency how will these bottom feeding franchises ever win?

Parity has been a good thing for the NHL in terms of keeping the teams in the playoff picture for much of the season, but it also creates a market where star players not only bring in a ton of loot, they are also starting to dictate where they play, just like in the NBA.

While not a popular view, contraction seems like the NHL’s best option, but you can be sure the NHLPA will fight hard to avoid something as radical as contraction as the players would lose a tremendous number of jobs.

How long must we endure the Phoenix fiasco? How long must we be forced to watch the New York Islanders wither away from being a once proud franchise to the laughingstock of the NHL? And how many other NHL teams are teetering on bankruptcy that we do not know about?

The Florida Panthers, Columbus Blue Jackets, Tampa Bay Lightning, Dallas Stars, Phoenix Coyotes, Nashville Predators and Carolina Hurricanes are all said to be losing boatloads of money— that represents nearly one third of the league!

Monday night news surfaced that Edmonton Oilers owner Darryl Katz is kicking the tires on moving his team to Seattle because he cannot get the support he needs to build a new arena. How bad are things in Edmonton— a franchise that is sold out more nights than not and has one of the most exciting group of young players assembled since the days of Wayne Gretzky, Paul Coffey, Jari Kurri, Grant Fuhr, Kevin Lowe, Mark Messier, Glen Anderson and the rest of the great Oilers’ teams from the mid-1980′s!

Folding one or two teams wouldn’t work. In order for the NHL to make any financial headway they would have to consider contracting at least a half a dozen teams, which would eliminate about 150 NHL players’ jobs, not to mention all the executives that would be looking for work.

Because the NHL is so top-heavy in revenue contraction would not hurt league revenues, at least not as much as we may think. With the revenue pie still intact, most of the remaining NHL clubs could ice excellent teams while continuing to award the players with excellent contracts.

In any other business if you are losing money you either relocate or shut your doors. In the case of the NHL the owners are all but forced to lose money with little or no way out.

While Toronto, Montreal, Vancouver, Chicago and the New York Rangers have little issue filling their rinks, most NHL clubs are practically begging their fans to come out to games, which means we will probably see more clubs offering up ridiculously priced Flex Packs to their fans before long.

Sure, the owners could always file for bankruptcy, but that’s hardly a solution. Neither is selling games on the cheap— why devalue your product to the point that you are losing money in order to sell it? When will the NHL finally admit that, despite record revenues, the league on the whole is a financial failure? When will the owners finally say “enough is enough, I’m tired of losing millions of dollars” and toss the keys to the rink back to Gary Bettman? And how will Bettman ever convince anyone to take over those failing franchises?

Is revenue sharing the answer? Simply put, no! Perhaps contraction is?