There’s been plenty of speculating about what coach would be fired first this season. Well, it’s happened and it wasn’t a coach oddsmakers had on the board. Gerard Gallant was fired by the Panthers following Sunday’s loss to Carolina.

Assistant coach Mike Kelly was also relieved of his duties.

“In seeking to earn a second consecutive playoff berth and bring a Stanley Cup to South Florida, we believe that new leadership is required immediately,” said Florida Panthers Chairman, Owner and Governor Vincent J. Viola in a statement.

While the team didn’t formally announce the firing Sunday night, Gallant confirmed the situation to reporters as he waited for a taxi outside PNC Arena to get a ride to the airport.

Monday morning, the team announced general manager Tom Rowe will be taking over as interim head coach. It’s Rowe’s first season as GM. Last season was his third year as head coach of Florida’s AHL operation, but half way through the year he was promoted to assistant general manager. Now, he’ll coach the club who won the Atlantic Division title last season and took the surprising steps or reorganizing the front office over the summer.

“My focus is solely on turning our season around, fixing our special teams and securing a playoff berth,” Rowe said.

It’s a disappointing end for Gallant, who is said to have repeatedly butted heads with the new management team over the team’s philosophy, wanting the team to get tougher, to some extent, while the management group quite possibly has more faith in analytics than any other club in the NHL. That was seen in the recent Logan Shaw and Michael Sgarbossa. Gallant reportedly liked Shaw.

UPDATE:
Rowe may not continue to handle the GM duties in South Florida. 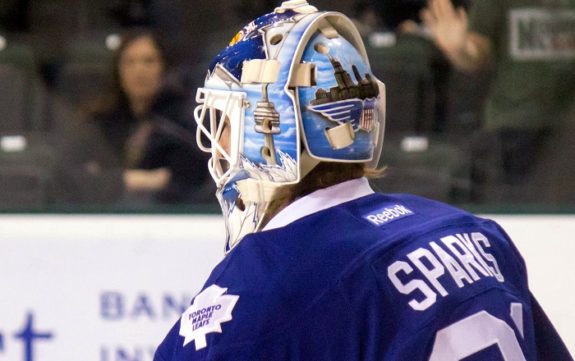 The Toronto Maple Leafs have suspended goaltender Garret Sparks indefinitely. The team has not confirmed the length or the reason for the suspension.

However, some sexist remarks from Sparks on Facebook might be the reason no one is talking about. The below comments were found on a goaltending group on Facebook founded by Sparks.

Not a good look for Garret Sparks. pic.twitter.com/UYL7alZnz4

“Management has dealt with Garret directly and will have no further comment at this point,” said one unidentified member of the organization according to Sportsnet.

The Calgary Hitmen held their annual Teddy Bear Toss on Saturday, with an incredible 23,924 teddy bears being tossed to the ice at the Scotiabank Saddledome. The Hitmen grabbed their first goal with just 13 seconds remaining in the first period. It was Micheal Zipp who potted a goal and started a storm of stuffed animals.

Late in that game between the Panthers and Hurricanes, Carolina forward Jordan Staal exited the game. He sustained an upper-body injury.

Details about the injury and if it might force him to miss time have not yet been revealed.

The Minnesota Wild have recalled rookie defenseman Gustav Olofsson from the AHL. The defender is one of the team’s more promising prospects but has had injuries derail opportunities and development year after year.

He wasn’t given a chance to make the team out of training camp this year because he suffered an injury during the Traverse City Prospects Tournament and was unable to attend camp. He’s been very good playing for the Iowa Wild and a recent injury to Christian Folin, who has surprised this season, has opened the door for Olofsson to return to the NHL.

– It looks like Jack Eichel is about ready to return to the Sabres.

JIMMY HAYES THROWS THE MONKEY OFF HIS BACK pic.twitter.com/AfGU7SbuKg