In a rarely seen circumstance, Monday’s game between the Hurricanes and Red Wings was postponed because of bad ice.

Early in the day, players noted the ice was garbage during morning skate and after a couple postponements with fans in the arena, the game had to be canceled.

We've resorted to Solitaire on the video board

The game was repeatedly delayed due to an issue with the arena’s cooling system. With the Red Wings scheduled to play in Tampa on Tuesday, there was a limit to how long the delay could be and they got there.

“We apologize to our fans who made the trip to PNC Arena tonight hoping to see the Hurricanes extend their nine-game home point streak,” ‘Canes president Don Waddell said in a statement. “A mechanical problem arose early this evening with the cooling system that keeps the ice solidified. We hope to announce a make-up date for our game against Detroit, as well as an exchange policy for the fans who had tickets to this game, in the near future.”

After grabbing a goal in Tuesday’s overtime win, Oilers winger Tyler Pitlick left the game with an injury.

The team did not provide an update on his status immediately after the game, but Rob Tychkowski reports that Pitlick was in a “walking cast up to the thigh” after the game and that head coach Todd McLellan said, “Right now, it doesn’t look good for him.”

Edmonton’s Patrick Maroon scored in Monday’s game against the Blues. It was the first time Maroon had scored against the St. Louis, the team he grew up watching as a St. Louis area native.

The goal was a big deal for Maroon. His young son was in the arena and got to see Dad score one against the hometown team. After the game, Maroon talked about how significant the goal was to him.

Hockey Canada has selected Dylan Strome as the captain of Team Canada at the 2017 World Junior Championship. Mathew Barzal and Thomas Chabot have been selected as alternate captains.

“We have eight players on this team who are captains of their club teams, and numerous other associate captains, so there is an abundance of leadership,” said Team Canada head coach Dominique Ducharme. “Dylan, Mat and Thomas have been through this tournament before, and we have confidence in their ability to lead this team on and off the ice.”

The 2017 World Junior Championship kicks off Dec. 26 in Montreal and Toronto. 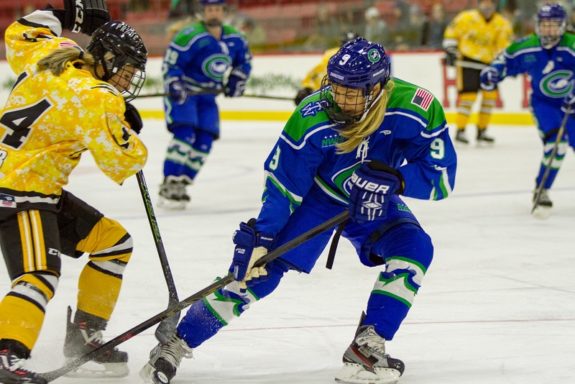 Connecticut Whale defenseman Molly Engstrom has become the third player to leave the NWHL since the announcement that the league will cut player salaries for the remainder of the season. She’s headed to Sweden to play in their women’s league.

The 33-year-old defender of Swedish descent announced her departure from the CWHL and the U.S. National Team back in 2013, but return to the game for the 2015-16 inaugural season of the NWHL.

“Molly has been an outstanding player for a long time and was a great friend to the NWHL in our opening seasons,” commissioner Dani Rylan said in a statement. “We wish her great success in Sweden and we will be rooting for her. Should she ever decide to return to the U.s., she will always be welcomed back to the NWHL.”

Engstrom’s departure leaves the Whale without a captain for the time being and thins out their blue line. She was the only defenseman who had scored a goal this season.

She is expected to join her new Swedish club team shortly after the start of 2017.

With an assist on a Kris Versteeg goal Monday, Sean Monahan has extended his point streak to 10 games. He’s the first Flames player to hit a 10-game streak since Kristian Huselius did it in the 2006-07 season.

Johnny Gaudreau also grabbed an assist Monday, giving him a point in every game since making his return to the lineup on Dec. 4. In those seven games, he has two goals and 11 points.

As we talked about previously former Flames coach Bob Haartley is going to coach the Latvian national team. That report was made official Tuesday morning.

Latvia was coached by Ted Nolan at the last Olympics and their most recent coach resigned just before the team failed to qualify for the 2018 Winter Olympics.

“I’m excited for the newest challenge in my career as a coach. It will be my first experience working with a national team and I’m grateful to the Latvian Hockey Federation for giving me the opportunity and confidence,” Hartley told IIHF.com’s Martin Merk.

“I’m looking forward to the moment when the Latvian national team will start its preparation, which will be the foundation of a successful start at the World Championship.”

The job is just for the senior national team and not the junior team reports Mark Spector, who also notes his contract has an out-clause for an NHL job.

Hartley, who was fired by the Flames last season, is no stranger to success in Europe, having led the Swiss Zurich Lions to a NLA championship in 2012, his lone season coaching in the NLA.

– The Tampa Bay Lightning have recalled Tanner Richard from the AHL’s Syracuse Crunch. In a corresponding move, they’ve reassigned Joel Vermin to the Crunch.