The most anticapated matchup of the Stanley Cup playoffs is almost upon us. The Los Angeles Kings and the St. Louis Blues square off as the 5 and 4 seeds (respectively), as the Blues try and exact revenge on a Kings team that accomplished what many thought unthinkable: win the Stanley Cup as an 8 seed. Can the Blues finally best the Kings, after having lost their last 7 games to them? We had already established that the Canucks or Sharks were the ideal team for the Blues to face in the first round. But can they beat the Kings? 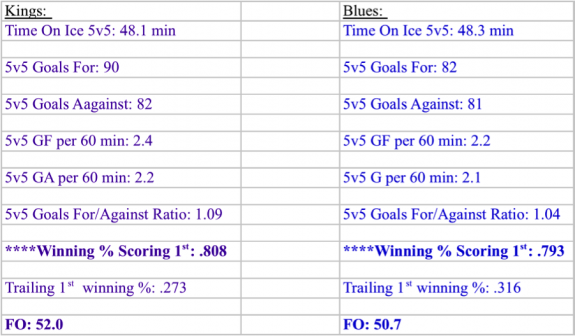 The Kings get the slight edge in 5v5 play, but take a look at their winning percentage when they score the first goal in a game compared to when they’re scored upon first in a game.

The Kings are 3rd in the NHL in winning % when scoring first but are 19th in the NHL when scored upon first. Have we found the tiniest of cracks in the Kings armor?

We’ll most likely find out at the conclusion of this series.

A key stat to watch out for in this series is team face-off percentage. The Kings have one of the lowest defensive zone start percentages in the league.

If the Blues start losing face-offs, that could mean long, extended periods of time in their own zone.

Recent special teams success is more indicative of a team’s special teams play than a teams overall power play percentage for the entirety of the season.

While it does have an indication as to a team’s power play potential, and how it has been for most of the season, I firmly believe in the saying:

“What have you done for me lately.”

In regards to the entire season, the Blues overall power play percentage was lower than the Kings, but comparing the team’s goal scorers, it is evident that the Blues have more ways to muster up a power play goal than the Kings do:

The Blues have 12 different players with a PPG

The Kings have 9 different players with a PPG:

Not only that, but the Kings power play goals mostly come from 3 players: Jeff Carter (8), Dustin Brown (8) and Mike Richards (6).

Although the Kings may have the best puck moving defensemen in the series, paging Drew Doughty, the Blues defense-corps of Bouwmeester+Pietrangelo+Shattenkirks+Leopold is scary power play depth.

An advantage in special teams is a MUST in this series. 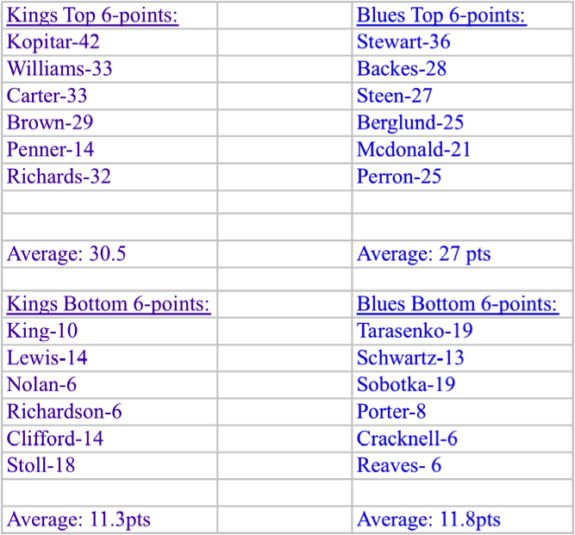 The Kings get the slight advantage here due to star power on their top lines, but not necessarily due to their depth.

Their plus/minus is also some of the lowest on the team. The Blues should attack them 5v5.

So in terms of 5v5 play, the Kings top line should be a focus point for the Blues, while the Blues bottom 6, especially their 4th line that’s been red hot at the end of April, has the potential to give the Kings some issues.

Also, the addition of T.J. Oshie into the Blues lineup will certainly be a huge upgrade on offense; but who sits out may be the toughest question to resolve for Blues head coach Ken Hitchcock. In all likelihood, it will be the rookie Vladamir Tarasenko or a guy from the Blues 4th line. Considering their recent success and the size of the Kings 4th line, I wouldn’t take out any of the Blues 4th line players.

If the Blues want to have any offensive success against this Kings team, they’ll need to play their game and keep the Kings pinned deep in their own end. It won’t be an easy task as the Kings have one of the lowest defensive zone start percentages in the league.

The slight advantage goes to the Blues based on their defensive depth and their superior top 2 pairings compared to the Kings.

The Kings certainly have the best overall defenseman in Drew Doughty, but when I see Barret Jackman on the Blues 3rd pairing and a top pairing consisting of Jay Bouwmeester and Alex Pietrangelo, I don’t even ask questions: that team gets the edge every time.

Sure, the stats favor Elliott, as Brian sports a better GAA and Save %.

But come on; it’s Jonathan Quick.

Jaroslav Halak is finally healthy again for the Blues. They have options in goal now, but Elliott has been hot lately and the Blues should ride the hot goaltender.

If Elliott can match Quick’s play, I suspect…

When all’s said and done, I believe goaltending and special teams will determine the winner of this series. The Blues and Kings are very similar in terms of their style of play and the way in which they try and beat you.

This is an area in which I believe the Blues defensemen, specifically Bouwmeester and Pietrangelo, will be most effective in this series. Their shots from the point must be respected so the Kings can’t just cheat down low. The same goes for the Blues when Doughty is out on the ice for the Kings.

On defense, both teams try to limit shots by keeping the opposition to the outside and by blocking shots from the point. The Blues defensemen have been especially effective at this, another reason they were given a slight advantage in the defensive category.

Key to the Series

The team who sports a power play that clicks at 20% will most likely win this series.

Sure, any number of things can change the outcome of a game and thus, a series. But I stand firm in my belief that a team with a 20% will win more games than they’ll lose; and isn’t that the goal of every playoff series?

Win more games than you lose. It sounds so simple. 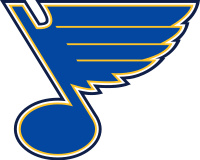