UNIONDALE, N.Y. — Casey Cizikas scored the tiebreaking goal in the third period and the New York Islanders won in their return to the Nassau Coliseum, rallying to beat the Columbus Blue Jackets 3-2 Saturday night.

Anders Lee and Anthony Beauvillier scored in the second period to tie the score after the Islanders fell behind, and Thomas Greiss stopped 28 shots. Scott Mayfield and Jordan Eberle each had two assists to help New York improve to 10-2-0 against Metropolitan Division opponents this season.

Markus Hannikainen and Pierre-Luc Dubois scored for Columbus, which had won two straight. Cam Atkinson had an assist for his 300th career point and extending his point streak to 10 games. Sergei Bobrovsky finished with 26 saves. 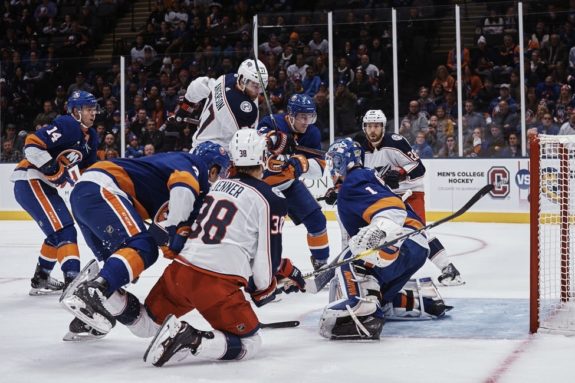 It was the Islanders’ first regular season game in 3 1/2 years at the Coliseum, the team’s home from its inception in 1972 until 2015. This was the first of 21 games at the arena as part of a unique arrangement with Brooklyn’s Barclays Center, the Islanders’ home since the 2015-16 season.

The Coliseum underwent $165 million in renovations that included; an upgraded locker room, brand new seats throughout the arena, and a modernistic metallic look to the exterior part of the building. Despite all of the changes, the intimacy and infrastructure of the building helped the crowd create a playoff-like atmosphere as chants of ‘Let’s go Islanders’ reverberated throughout the sold-out venue.

Ryan Pulock set up Cizikas at 7:09 of the third period to give the Islanders their first lead of the game. The right-handed shooting defenceman froze several Blue Jackets skaters as he circled the net and eventually found Cizikas all alone in front.

Columbus capitalized on two New York Turnovers in less than two minutes early in the second period to earn a 2-0 advantage.

After Josh Bailey’s floating outlet pass could not be controlled by Beauvillier, Seth Jones launched a slap shot which forced a big rebound opportunity. Hannikainen found the loose puck and got his fourth of the season at 6:46.

The Blue Jackets doubled their advantage shortly after when Dubois wired a wrist shot off the crossbar and into the back of the net at 8:33. Atkinson got his milestone point on the play.

Lee cut the Blue Jackets’ lead in half with eight minutes remaining in the middle period. The goal was initially waived off by the referee because the puck went off Lee’s hand and then his body as he fell toward the goal, but after a video review the call on the ice was overturned.

Just 2:25 later, Beauvillier made up for an earlier mistake, finishing his own rebound to knot the game 2-2. Beauvillier skated up the ice with Mathew Barzal creating a 2-on-1 opportunity, but kept it himself while the Blue Jackets defenceman guarded against the cross-ice pass.

NOTES: During the first television timeout in the opening period the Islanders displayed a video tribute to their late owner, Charles Wang. He repeatedly tried to keep the Islanders at Nassau Coliseum throughout his ownership, but the arena was never upgraded with modern amenities. … Four-time Stanley Cup Champions Clark Gillies and Bobby Nystrom were in attendance along with the franchise’s first captain, Ed Westfall. … Islanders scratched forwards Stephen Gionta and Ross Johnston and defenceman Lucas Sbisa. .., Columbus skated in the final regular-season game at Nassau Coliseum on April 11, 2015. The Islanders played three more playoff games here that year, losing a seven-game series to current coach Barry Trotz and the Washington Capitals. … Blue Jackets scratched forward Anthony Duclair and defenceman Dean Kukan.