NEWARK, N.J. — Mark Scheifele scored his second goal of the game at 4:43 of overtime, and the Winnipeg Jets beat the New Jersey Devils 4-3 on Saturday night.

Schiefele tucked the puck past Keith Kinkaid as the Jets won their second straight, improving to 3-3-0 over their past six games. 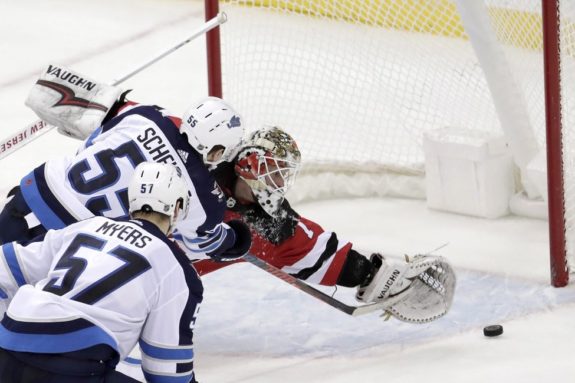 In the overtime, the Devils failed to convert a 2-man breakaway as Brossoit stopped Hall, who was set up by Nico Hischier.

The Jets continued their mastery of the Devils. It was their sixth straight win over New Jersey, improving to 12-1-2 in the last 15 meetings.

The Devils, coming off a loss at Washington on Friday night, rallied with two goals late in the third period to tie it. Jesper Bratt scored on a power play at 15:41, and with Kinkaid on the bench for an extra attacker, the Devils swarmed the net and Hall poked in the equalizer on a goal-mouth scramble with just under two minutes left.

The Jets challenged and lost a goaltender appearance appeal.

Johansson scored the only goal of the opening period at 6:45, thanks to a fortunate bounce. His initial shot was blocked by Jets defenceman Ben Chiarot and the puck came right back to him. Johansson netted the second try to extend his goal-scoring streak to two games.

Scheifele evened the score with the lone tally of the second period at 4:25, firing a quick shot from the left faceoff dot following a sharp pass from Blake Wheeler.

Both Scheifele and Wheeler extended their point-scoring steaks to four.

The Jets stepped up their game in the third, and came close when Adam Lowry hit the crossbar with 12 minutes left.

About a minute later, Patrik Laine, the NHL’s top goal scorer, hit the post and Jets were again denied.

The pressure finally paid off when Morrissey beat Kinkaid from the slot at 10:32, giving the Jets the lead for the first time with his second goal of the season.

Jets: At the New York Rangers on Sunday night.

Joey Moss Will Forever Be a Part of Oilers History

Did the Sabres Hit the Offseason Ull-Mark?

Islanders Have Plenty of Options for Bottom Six