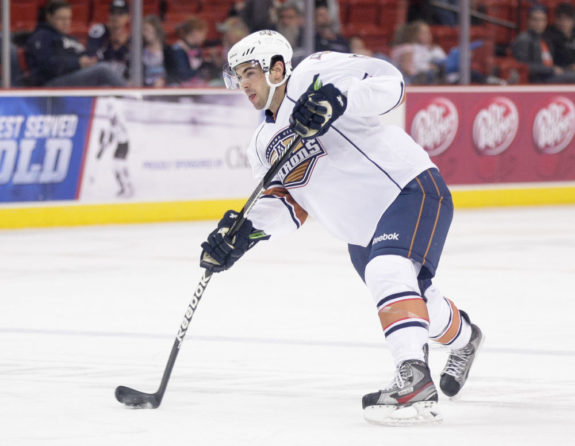 Justin Schultz came into the 2012-2013 season with a lot of hype and under even more scrutiny.

Projected to start the season in the top 6 of Edmonton’s defence, many were suggesting that Schultz would not be able to hold up to all of the hype and scrutiny at the NHL level.  That he was setting himself up for failure.

Enter the CBA negotiations and the NHL lockout.

With the NHL not a possibility, Schultz along with many other young players were forced to start the year with the Okc Barons in the AHL.

In hindsight the lockout could have been the best thing to happen to Schultz and his development.

He is absolutely tearing up the AHL so far, leading the league with 32 points in 22 games.  He leads teammate Jordan Eberle who sits second in league scoring with 30 points, The next closest defenceman is the Marlies Mike Kostka with 20 points.

One of the most talked about players who never played a professional game this past offseason, Schultz drew considerable criticism for his decision not to sign with the team he was drafted by, the Anaheim Ducks.

Exposing a loophole in the previous CBA which allowed him to become a free agent after the Ducks couldn’t sign him, Schultz held court listened to the many suitors who stated their case before him.

Many in the media were critical of Schultz, the fact that he had not yet earned the right to choose where he went, and that he should honour the team he was drafted by and sign with the Ducks.  However, the circus that ensued and the criticisms that were laid on him were somewhat unfair, as the attention garnered was media created.

Schultz simply took advantage of a clause in the CBA and exercised his right.  Not the only player to do so I might add, (ie Blake Wheeler).

In the end, the Edmonton Oilers became the beneficiaries and Schultz donned the blue and orange.

They are now starting to reap some of their reward and get a glimpse of the player they were hoping they got.

Schultz has shown the offensive instincts, elite skating and superb passing skills that all of the scouts have raved about.  Even his defensive game, which still remains a work in progress, is steadily improving evidenced by his +14 rating, good for second in the league.

The Oilers no doubt are absolutely thrilled at his progress.  With the elite level talent up front and young blue chippers brought in from the last few drafts, the brass was no doubt looking at the defence and thinking, now who’s going to move the puck up to these guys over the next 5-10 years? 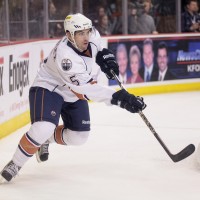 It is far too premature to say Justin Schultz is that guy, I mean let’s face it, even with all his success so far he still has yet to play an NHL game.  He has, however, put himself in a terrific position to succeed as there is no one else currently on the Oilers roster who has his offensive abilities.

Whenever the NHL starts back up you can bet Schultz will be manning the point on the first unit powerplay.  Oh and did we mentioned he’d be feeding players such as Eberle, Hall, Nugent-Hopkins, Yakupov, Hemsky…..you get the picture.  It has the potential to be downright scary for opposing teams.

The interesting thing will be how his defensive game comes along between now and the start of the NHL season.  While he will certainly get a chance at major PP minutes, time will tell how much 5 on 5 time he sees.

In the offseason the depth chart was predicted to be Ryan Whitney, Ladislav Smid, Jeff Petry and Nick Schultz in the top four, with Justin Schultz fifth on the depth chart and logging extra PP time.  The sixth and seventh spots would come down to a battle between Andy Sutton, Theo Peckham, Corey Potter, Colten Tuebert and Taylor Fedun.

It’s hard to say that the order has changed, with three of the top four not playing at all, Smid in Europe and Sutton facing possible career-ending surgery, it doesn’t exactly give an accurate picture.

Even if Schultz hasn’t officially moved up the depth chart, he has certainly made not only the Oilers, but the entire league take notice.

He may not have silenced his critics, but he has certainly quieted quite a few down.

Time will tell where Justin Schultz will find himself on an NHL depth chart, but for now, it’s enough to enjoy to show he is putting on.