Ray Shero’s time as the Pittsburgh Penguins general manager is often seen as a failure. After all, he had both Sidney Crosby and Evgeni Malkin throughout their early and mid-20s and only managed to win one Stanley Cup out of it.

He was often praised for the trades he made, most notably acquiring a trio of wingers for essentially next to nothing during his tenure. First, it was Marian Hossa in 2008, then James Neal in 2011 and finally Jarome Iginla in 2013. But the biggest knock on Shero has come from his draft day history, as only two of his first round picks (Jordan Staal in 2006 and Olli Määttä in 2012) have made a real impact at the NHL level. Despite this, has his draft day history been as bad as it’s made out to be?

Shero Set up the Future in Net

With a young Marc-Andre Fleury patrolling the crease, Shero’s main focus wasn’t finding a goalie, as only four of his 50 draft picks during his tenure were goalies. His first two, Chad Johnson (2006 fifth round) and Alexandar Pechurskiy (2008 fifth round) didn’t work out, but he couldn’t have done any better with his last two, as they turned out to be Matt Murray and Tristan Jarry.

The Penguins used the 83rd pick in 2012 to take Murray from the Sault Ste. Marie Greyhounds of the OHL and just four years later, he stormed onto the scene and helped lead the Penguins to their first Stanley Cup since 2009.

It was initially thought Murray may need three or four seasons after making the jump from amateur hockey before he was close to ready for NHL action, but he looked ready the second he jumped into the professional level during the 2014-15 season, as he posted a 25-10-3 record with a .941 save percentage (SV%) and 1.58 goals against average (GAA) along with 12 shutouts in 40 games for the Wilkes-Barre Scranton of the AHL.

The third-ranked goalie in his draft class by NHL Central Scouting, Jarry hasn’t developed as quickly as Murray or had the NHL success of his counterpart. He may actually possess the higher ceiling between the two and has shown he has the talent to be a starter. Maybe he doesn’t get that chance in Pittsburgh because of Murray, but he’s eventually going to be a starter for someone.

Last season, the 23-year-old appeared in 26 games for the Penguins and posted a .908 SV% with a 2.77 GAA. Despite those numbers, Jarry had more ups than downs and showcased the athleticism, lateral movements and talent that made him such a highly regarded prospect. It’s likely he’ll spend the upcoming season in the AHL in order to get as much game action as possible, but he could be the full-time backup by 2019-20. With a cheap cap hit ($675,000) for the next two seasons, the cap-strapped Penguins would have just $4.4 million invested in two NHL starting caliber goalies.

The 2012 Draft Changed the Blue Line

During the 2012 draft, Shero made two moves in the span of about 90 minutes whose benefits have been reaped by the present-day Penguins defensive core. The first one was a trade, where the team moved away from its three-center philosophy by trading Jordan Staal (who found out about the trade on his wedding day) to the Carolina Hurricanes for the eighth overall pick (Derrick Pouliot), Brandon Sutter and defensive prospect Brian Dumoulin.

The biggest piece of the deal was supposed to be the pick used to select Pouliot, but of course, things don’t always work out. The biggest name from that deal ended up being Dumoulin. After playing just 14 games with the Penguins between 2013-14 and 2014-15, Dumoulin burst onto the scene for the Penguins in 2015-16, playing a shutdown role and elevating himself up to the first pair with Kris Letang, a pairing which has quietly become one of the best in the league over the last three seasons. 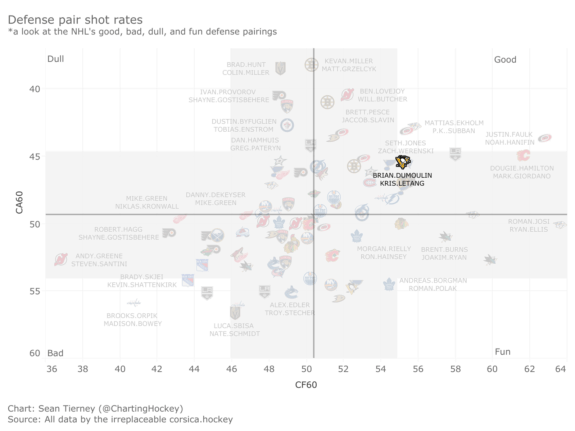 Dumoulin also played an integral role in the Penguins consecutive championships, especially in 2017, sliding in as the defacto number one defenseman following Letang’s neck surgery. All this despite reportedly breaking and re-breaking his hand multiple times during the run. His efforts earned him a six-year, $24.6 million contract which will keep him in Pittsburgh until 2023. His lack of offense played a role in the lower cap number, but his defensive stability is invaluable to the Penguins. THW’s Julie Stumbaugh wrote about why re-signing Dumoulin made sense despite the lack of offensive output.

The 2017 Cup is the first time the Penguins have won in the modern era without Letang. And while doing it, they leaned on Dumoulin. That serves as an indication of how important Dumoulin’s role with the Penguins has become.

The second move of the night was the selection of Finnish defenseman Olli Määttä with the 22nd overall pick. Although he turned just 24-years-old a few weeks ago, he’s the longest-tenured Penguin not named Crosby, Malkin or Letang.

Määttä made the Penguins 2013-14 opening night roster as a 19-year-old. Despite his youth, he played like a 10-year veteran and was an integral part of the blue line from the get-go, averaging 18 and a half minutes a game. He recorded 29 points in 78 games and finished fifth in Calder Voting. His rookie performance proved vital as Letang struggled with injuries and a stroke.

The 2014-15 season was not kind to Määttä, as he limited to just 20 games, and was diagnosed with a cancerous tumour on his thyroid, the mumps and eventually suffered a season-ending shoulder injury in January. Määttä was at full strength for 2015-16 but struggled when he was on the ice, routinely turning the puck over and having defensive mishaps. Feeling it was just a down year, the team signed him to a six-year, $24.5 million extension in February of 2016.

It seems to have been a good gamble by the front office over the last two seasons, as Määttä and Justin Schultz have become a consistent second pair for the Penguins and played a huge role in the second of the teams back-to-back Stanley Cups. As he further distances himself from injuries he dealt with early on in his career, he’s begun to play better. He showed it in 2017-18, as he was arguably the teams most consistent defenseman. 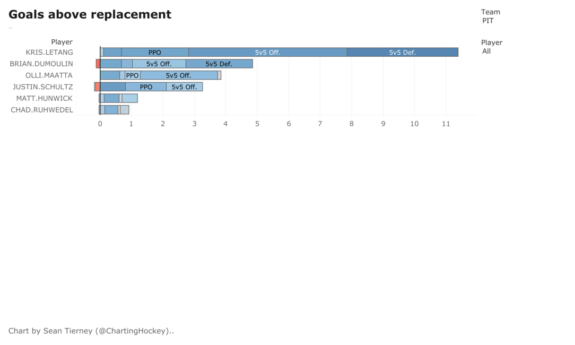 Kris Letang‘s season-long performance in his return from neck surgery didn’t inspire a ton of confidence, and Schultz suffered a year-to-year dip in points per game (from 0.65 in 2016-17 to 0.43) and relative shot share (from plus-1.9 percent to minus-2.1). Those guys aren’t without value, but it’s not a stretch to call Dumoulin and Määttä the team’s two most reliable defenders heading into 2018-19- Matt Gajtka, Pittsburgh Hockey Now

Making one move in a season which reshapes a team’s defensive core is impressive, but two in a single day is unheard of.

Finding talented, young offensive players has been a challenge for the Penguins during the era of Crosby and Malkin. It was thought first rounders Angelo Esposito (20th overall, 2007) and Beau Bennett (20th overall, 2010) would be key cogs in the Penguins lineup for years, but neither were. Esposito never played a game for the Penguins, as he was dealt to Atlanta in the Hossa deal. Bennett had the looks of a future member of the Penguins core, but his inability to stay healthy ultimately derailed that.

Rust, the 80th overall selection in 2010, has quietly become one of the Penguins best all-around forwards in short order. After spending four seasons at Notre Dame, the winger made the jump to professional hockey in 2014-15 with Wilkes-Barre and even played 14 games at the NHL level that year. However, he didn’t earn a full-time spot with the big club until midway through the 2015-16 season.

Rust made a name for himself during Game 7 of the 2016 Eastern Conference Final as he scored both of the Penguins’ goals in the 2-1 victory over the Tampa Bay Lightning. Without Rust’s heroics, it’s likely the team doesn’t win the Stanley Cup. Rust carried that momentum into the 2016-17 season, recording 28 points in 57 games and adding to his playoff resume with the clinching goal during the Penguins’ 2-0 victory in Game 7 of the second round against the Washington Capitals.

Although last season, Rust established himself as one of the Penguins most valuable forwards. In 69 games, he recorded 38 points while flashing his ability to play at all situations and on any line. His continued development and performance earned him a three-year, $14 million extension, which could turn out to be a bargain. 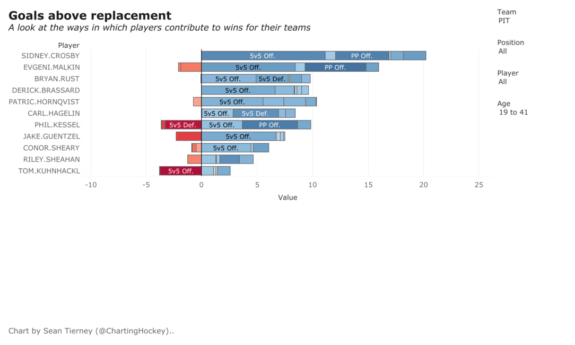 Guentzel was selected 77th overall in 2013, a pick the Penguins acquired in the Brenden Morrow trade during the lockout-shortened 2012-13 season. Like Rust, Guentzel went the college route, spending three seasons at the University of Nebraska-Omaha. He only needed 42 games in the AHL during his first professional season to make the jump to the NHL and he impressed, as he recorded 33 points in 40 games. He was even better in the playoffs, putting up one of the best performances by a rookie in recent memory with 13 goals and 21 points in 25 games, helping lead the Penguins to a Stanley Cup.

2017-18 saw Guentzel have some regular season up and downs, but he played all 82 games and scored 22 goals and 48 points in his first full season. His playoff run managed to be even better this time, as Guentzel recorded 21 points in 12 games, including a four-goal effort in Game 6 of the Penguins first-round victory over the Philadelphia Flyers. At one point, he and Crosby were the only two players producing for the team. 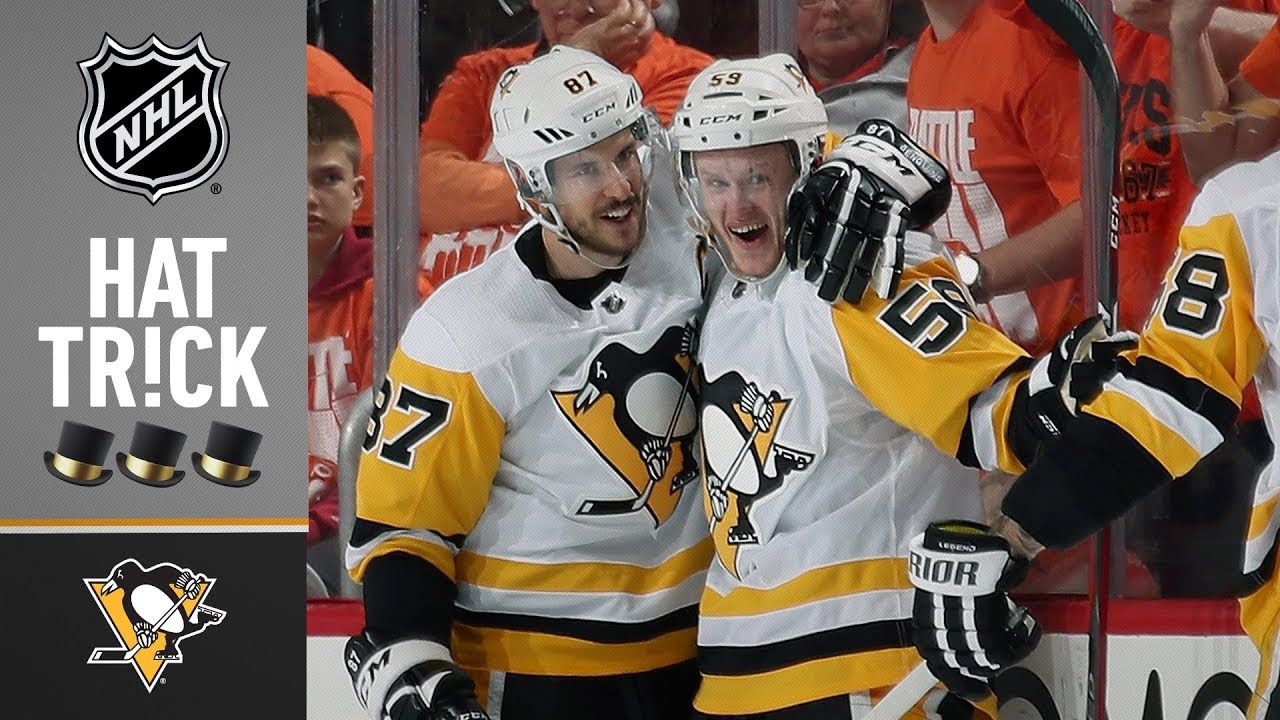 It’s easy to stop at his offensive production, but his carefulness with the puck is another important part of his game. He turned the puck over 18 times last season, second-fewest among Penguins who played over 700 minutes and his 36 takeaways was fifth on the team. The Penguins also controlled 53.6 percent of shot attempts with Guentzel on the ice as well.

Here’s a look at how Guentzel and Rust have performed over the last two seasons and along with how they contributed offensively last season. 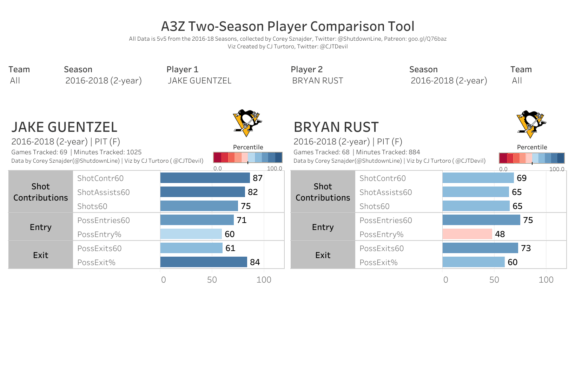 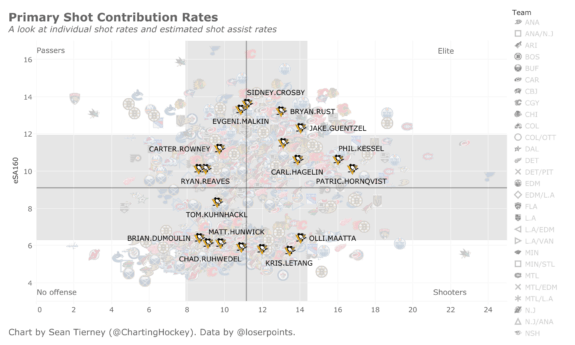 Unlike Rust, though, Guentzel isn’t locked up past the 2018-19 season and the 23-year-old is going to get paid when the time comes, writes our Greg Thornberry.

There is no reason to believe that he will not reach the 30-40 goal range, which puts him in a much higher tax bracket than he would have been if general manager Jim Rutherford had locked him up prior to the start of the season — which could still happen but is unlikely.

Like most general managers, Shero had his share of draft misses and he covered those up by trading those prospects and picks, which delayed the struggles seen in 2013-14 and 2014-15. Make no mistake, Jim Rutherford has modelled this team and has rightfully earned the credit he’s been given. Although in recent years, the draft day moves made by Shero in the back half of his tenure have begun to show its results, and he deserves credit for it as well.