Friday night featured a potential first-round matchup between the Nashville Predators and the Colorado Avalanche. As it sits on Saturday afternoon, the Avalanche will narrowly miss the best in the West and the Predators will likely take on the Dallas Stars. Although the Stars and Avalanche are tied in points, the Avalanche have a game in hand and a higher rate of wins.

The Predators traveled to Denver on the second half of a back to back and didn’t disappoint. While they didn’t control the pace of the game, they made their chances count. Unlikely heroes stepped up, and a trusted back-up upheld his end of the bargain as the Predators left with two points. Not only that, but they also secured a playoff spot.

A Vision of Playoff Sissons

Every fan remembers Colton Sissons’ heroics in the playoffs last year, as he scored a hat trick to push the Predators past the Ducks, but it left many questioning what his contributions would be in 2017-18. Some thought he would be the next offensive threat, while others assumed he would stay a fourth liner with some offensive upside. The latter group turned out to be correct, but this shouldn’t take away from Sissons as a player. I, especially, have been critical of Sissons’ play, but he’s really picked it up recently. Friday night was no different as he made a positive impact on the third line. For reference, I’m using shot attempts (Corsi), unblocked shot attempts (Fenwick), goals, and zone starts for (offensive) and against (defensive). All stats are at five on five. 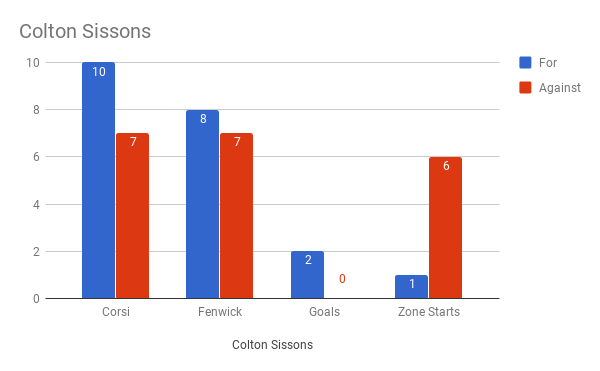 I don’t know what head coach Peter Laviolette is thinking, using the third line in so many defensive situations. I’m not trying to disparage the line, but I think it’s safe to say that guys like Nick Bonino, Ryan Hartman, and Sissons are better served in a more sheltered role. Despite my feelings, Sissons didn’t need any sheltering at all.

The Avalanche had no answer for Sissons as he dominated the shot share and added two goals to boot. The first goal was a beautiful shot that came after P.K. Subban made a nice pass across the offensive zone. While Sissons didn’t have a lot of time to shoot, he picked his spot and beat Semyon Varlamov with a quick wrister. The second, and game-winning goal came as a beautiful one-timer from the top of the circles. Hartman did a great job of corraling the puck and making a slick pass to Sissons who, once again, got off a sharp shot with little room or time.

Friday night was one of Sissons’ best games of the season, and he deserves to be celebrated for it.

Mike Fisher came out of retirement in a blaze of glory. Goals were scored, possession was created, and high danger chances were had, but the old-timer was huffing and puffing at the end of each shift. While we can argue about his off-ice role and the “leadership” he provides, his on-ice stats aren’t exactly great. The Avalanche used their speed to abuse Fisher and the fourth line, and the stats reflect it. For reference, we’re using the exact same stats as Sissons. 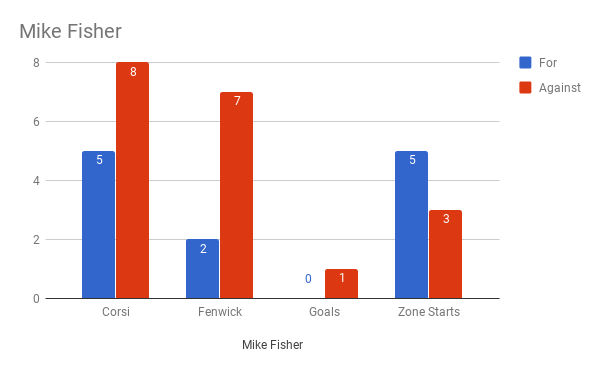 Things were rough for the 38-year-old. Fisher didn’t exactly drive possession, although he wasn’t given offensive linemates. Austin Watson and Miikka Salomaki aren’t juggernauts, but they’re defensively responsible, even if the chart above doesn’t reflect that. The fourth line that usually dominates defensively was used in an offensive role, for whatever reason. They did start in the offensive zone 62.50% of the time, but they rarely ended their shifts there. Fisher was constantly getting beat up the ice and looked weak in front of his own net.

Gabriel Landeskog’s goal that came against the fourth line was mostly because of Fisher’s inability to tie up his man. This resulted in Landeskog having a few chances at the puck, with his last crossing the goal line. This is obviously just one game, but the Predators need to be able to trust Fisher to play responsibly in his own zone.

While Fisher’s spot is locked in at the moment, maybe he should be the odd man out when Calle Jarnkrok returns from injury. I hate to say it, but at least on Friday, Fisher looked too slow for the modern NHL.

Does the Defense Hate Saros?

The Predators have the most talented defense in the NHL, but it’s far from the best. Constant lapses in front of the net often have Pekka Rinne and Juuse Saros swimming and stretching to make big saves. Friday was no different as Saros was peppered from within 10 feet of the net. 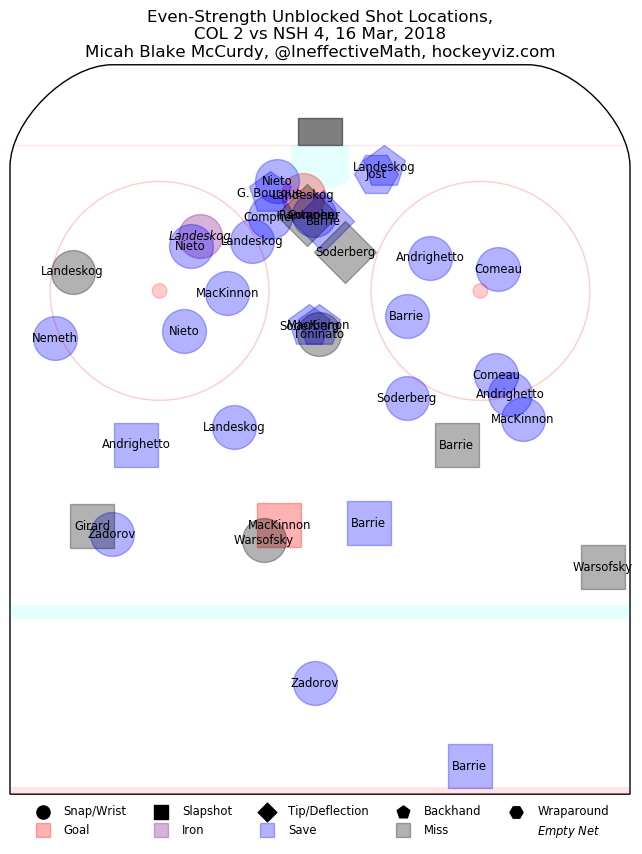 I mean, cmon, take a look at the net-front area. It’s incredible that Saros only gave up two goals in total. Plus, this doesn’t even include special teams. The Predators need to get their house in order before the playoffs start, or some team is going to abuse the high danger area like a rented mule.

The Predators take on the Buffalo Sabres on Monday night, in what should be a bit of a snoozer. Sam Reinhart will look to continue his blazing pace and push the Sabres out of the “#FallinForDahlin” contest. While it doesn’t look like much on paper, it has trap game written all over it.