Game 82 of the season has come and gone and the Nashville Predators are the best team in the NHL. The Presidents’ Trophy is coming to Tennesee and it was a wild ride. There were ups and downs, blockbuster trades, and incredible goaltending. While things weren’t always peachy, there was always a sense that everything would be ok, and that the Predators would come back.

The playoffs begin on Wednesday and the Colorado Avalanche will find their way to Smashville. Before the first round begins, let’s take a moment to look back and see where the Predators ranked among the NHL. For a team that dominated the rest of the league in wins, they weren’t exactly world beaters. Disclaimer, we’re using some very casual stats as well as some more advanced analytics, all at five on five.

This shouldn’t be a shock to anyone, but the Tampa Bay Lightning had the best goal percentage in the NHL with 57.31%. The Predators finished in second place. They owned 56.61% of all goals, but did so in an odd fashion. The Predators scored the eighth most goals in the NHL with 167, but that wasn’t their strength. Incredible goaltending has propelled a poor defensive team to actually allowing the second-least amount of goals in the entire league (bested by only two by the Kings). The Boston Bruins are a close second, but unlike the Predators, they actually play with a stout defense that doesn’t depend on Vezina quality goaltending.

As I said earlier, the Predators owe their incredible goal differential to Pekka Rinne and Juuse Saros. Both goalies are sporting over a .925 save percentage and owe absolutely no one but themselves. To see just how bad it has been, look at the heat map below. 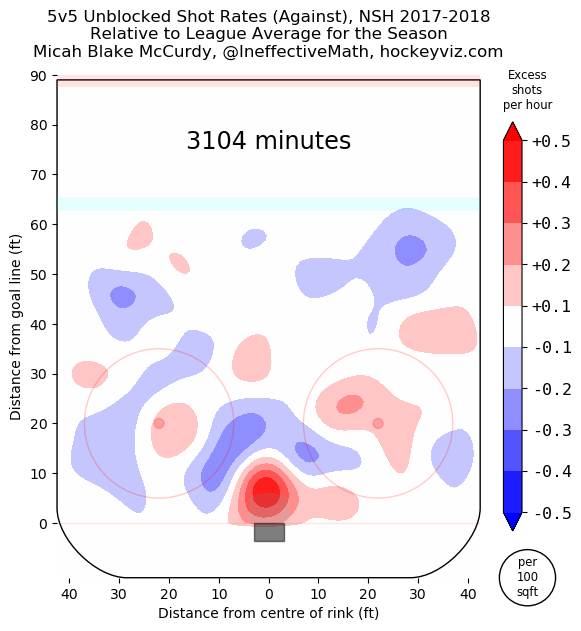 To start with some good news, the Predators suppressed shots from the point. But it was probably because other teams would elect to shoot in the high danger areas. Despite this poor defense, the goaltending has stood tall, although that sort of magic can run out in an instant.

Tracking possession has caused fighting between just about everyone. Whether you believe that actual time with puck should constitute possession or keeping track of shot attempts should, we can all agree it’s important. So I figured I’d start with an extremely rudimentary method, just counting shot attempts for and against. Otherwise known as Corsi.

The Predators rank 10th in the NHL in terms of Corsi with 51.48%, as the Carolina Hurricanes are first with a 54.48%. Pure Corsi isn’t always a good indicator of a good team, but the best teams in the NHL always rank in the top 10. It’s not a big deal that the Predators are 10th, but it’s a comforting sign that they made the cut.

What’s most interesting is how the Predators have created this Corsi. They’re only producing the 14th most shot attempts in the league, but their strength comes from suppressing shots. They’ve allowed the fifth fewest shot attempts in the NHL, but most of those are from high danger areas. So in terms of quantity, the Predators are doing a good job of controlling the pace of games.

The old cliched catchphrase of many NHLers rings true, the Predators go out there and play their game.

Fenwick is basically just Corsi, but it doesn’t count blocked shots. I tend to prefer Fenwick when deciding who’s controlling the pace, as blocking shots can be vitally important to some teams. The Predators are one of those teams who are incredible at blocking shots, but it doesn’t always happen with their bodies. Incredible body and stick positioning allow the Predators to smother the opposition when playing in transition. Because of this, certain defensemen have rough Corsis but excellent Fenwick.

The Predators are actually own a Fenwick of 51.49%, good for ninth of the NHL. The possession giant of the NHL, the Boston Bruins, rank first in the NHL with a 53.69% Fenwick. The Fenwick story is the same as Corsi, as the Predators are actually 14th in the NHL in Fenwick produced, just like Corsi. They’ve also only given up the fifth fewest Fenwick attempts, just like Corsi. It’s actually a bit strange how these two stats line up so similarly.

Defenseman like P.K. Subban have changed the game, so to speak. Defensive defenseman are no longer the big bruising men that punish forwards in the corners. Instead, speedy, more mobile defensemen dominate the game in transition. Subban is one of the best at stopping scoring chances before they even happen as he keeps even the most dangerous forwards to the outside. Fenwick is the best tool to showcase Subban’s supreme body positioning and hockey I.Q.

In this case, the Predators’ Fenwick confirms what we know. They’re great at dictating pace.

Luck, or as some call it, PDO. I won’t go too far into it because luck is dumb, but it’s worth discussing. The Predators actually finished with a 101.7 PDO. Good for the third-luckiest team in the NHL, behind both the Tampa Bay Lightning and Toronto Maple Leafs. They’re doing this despite shooting below the national average, 8.19%, about a full percent below the average. Once again, the goaltending bails out the Predators. Rinne and Saros have put up a 93.55% save percentage at five on five, two percent over the average and a fifth better than the next best.

The Predators have had the best goaltending in the world, but will their luck persist in the playoffs? There’s no way to know, but there is a stat that might predict the future.

This is probably the stat that I come back to the most. The Predators have had a rough go with high danger chances (HDC), as they usually get beaten. They’re actually the most average team in the NHL, as they control 49.56% of the chances, good for 15th.

Once again, the offense comes up lacking as they’ve only produced 669 HDCs, good, or bad for 21st in the NHL. The Predators seemingly have an allergic reaction to the net-front area, as Viktor Arvidsson is apparently the only player who produced high danger chances. That’s why Arvidsson leads the team in points, as no one else (Forsberg included) gets to the net front.

The defense doesn’t do a great job either, as they’ve given up the 15th most HDCs with 681. If goaltending drops even a little, the Predators could find themselves in some hot water.

Should the Predators Worry?

Probably not. The goaltending luck coupled with the number of high danger chances against is not a great sign for the future. If Rinne falters and Saros can’t pick up the slack, the Predators could find themselves on a golf course in May.

While the Predators dominate shot attempts and control pace, they rarely do anything worthwhile with it. They’ll need to capitalize on their extended possession if they expect to win 16 games. One thing is for sure, it certainly won’t lack excitement.