Last season, Viktor Arvidsson was the hipster pick for breakout player of the year, and he didn’t disappoint. The Swedish winger put up a cool 31 goals and 61 points in 80 games. So far this season, the numbers have been down for the entire Nashville Predators squad. Arvidsson is no exception, as he likely won’t eclipse the 60 point mark, although he’s caught fire in the last 10 games or so.

Despite this recent surge, things just haven’t gone Arvidsson’s way. Has it been an injured Predators’ roster that created weird and unusual lines, or does the answer lie within Arvidsson’s number? Let’s take a moment to look back at the difference between this year and last year.

The JoFA line took the NHL by storm last year, which spawned dozens of articles by writers in both the old school and analytics community to find who was the straw that stirred the drink. Through my own research, I really believe that it’s center Ryan Johansen, although this year may not support my findings. The entire line’s numbers are down and Arvidsson’s are perfectly reflective of it. For reference, I’m using unblocked shot attempts (Fenwick), goal percentage, high danger chance percentage (HDC%) and offensive zone starts at five on five. 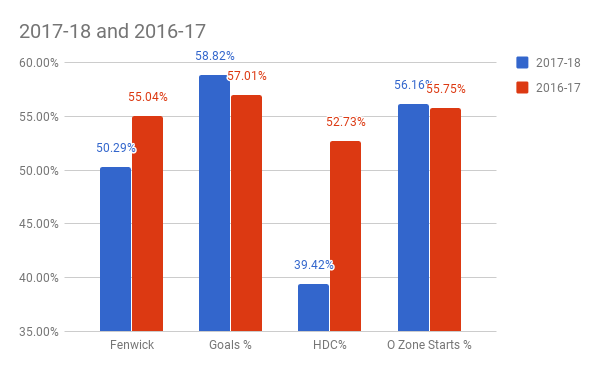 The numbers aren’t exactly a good look for Arvidsson, as all of his numbers are down from the previous year. All except goal percentage, which likely has to do with Ryan Johansen’s growth as a two-way center. Otherwise, the main stat I’m looking at is high danger chance shares. Arvidsson went from controlling over half to controlling just over a third. He’s lost this incredible ratio despite receiving even more zone sheltering.

Despite the increased zone sheltering, Arvidsson has seen little talent sheltering. Last year, the JoFA line would routinely face second or even third line talent to optimize their scoring, but this year has seen that go the way of the dodo. Johansen and company now face the creme de la creme of each team night in and night out. This, combined with the third line facing second line talent, allows the Turris line to face off against lesser competition to maximize their offensive input. It’s basically a gamble by Peter Laviolette that the first line can outscore the opposition’s first line, the third line can shut down the opposition’s second line, and the Turris line can score on the opposition’s third line. Obviously, this hasn’t paid off.

Now let’s get to the cause of the problems.

The Root Of The Issue

What made Arvidsson such an attractive hipster pick for breakout player of the year was his shot generation. It’s the reason he potted 31 goals in 2016-17 and it gave all Nashville Predators’ fans hope for the future. That seemingly dried up over the off-season. For reference, I’m using shots per 60, goals per 60, high danger chances per 60 and just shooting percentage to look at luck. 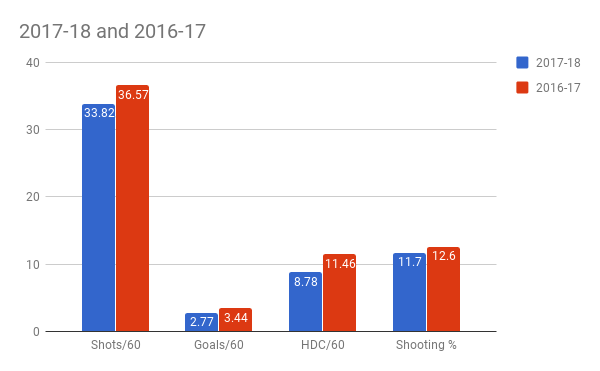 Once again, the numbers are down this year. Arvidsson is getting less lucky than last year, even though they are shooting two percent above the league average. Despite this high shooting percentage, Arvidsson is still scoring a goal less per 60 than the year prior. I think this is mostly due to the fact that he’s producing three fewer high danger chances per 60. That’s about one less per game, and an overall theme for the Nashville Predators this season. The Predators are actually in the bottom five of the league for high danger chances, and Arvidsson isn’t immune to their struggle.

High danger chances are the best way to score a goal, as goalies usually save about 77% of shots from there. So directly increasing his HDC would immediately impact his goals per 60. I believe this drop in HDC is mostly because Arvidsson isn’t getting to the net front as much as he used to. In 2016-17, he went to the slot with reckless abandon and was rewarded for it. He got to the dirty areas and won puck battles, he played a hard-nosed style that was taxing on the body. We all became used to it and expected a similar game in 2017. That obviously didn’t translate to this season, as Arvidsson tried to move towards a more skill based game. While he’s still putting up points, Arvidsson lost a lot of what made him unique, which leads to the most important change.

Arvidsson’s shots per 60 is down quite a bit. He went from being fifth in the entire NHL in shots/60 to being eighth on the Nashville Predators and not even in the top 100 in the NHL. Arvidsson is no longer doing what made him so successful and while it may not affect him now, it will come back. Players who rely so much on their speed and “motor” tend to decline once injuries reveal their eventual ugly faces.

Can Viktor Arvidsson Turn It Around?

Of course! That’s the good news, nothing is ever broken beyond repair as long as injuries aren’t involved. The Swedish wrecking ball has to use his small but stocky frame to get to the high danger areas. If he returns to what originally made him so successful, there’s no reason to think that points won’t follow.

A healthy and full roster will help Arvidsson as he’ll finally get consistent time with Filip Forsberg and Ryan Johansen, plus an elite defense. I personally think things are on the up for Arvidsson, but the stats don’t necessarily agree. One thing is for certain, the Nashville Predators will need him to step up come playoff time.