The San Jose Sharks face the Carolina Hurricanes 24 hours after a quick one-game road loss to Anaheim Ducks. The Sharks hope to change the narrative from the past two games: spot a two-goal lead, tie the game, lose late in the third period.

Lindholm wrist shot beats a screened Jones, Ducks take a 3-2 lead with 5:38 to go in the third

The Sharks played the Hurricanes back on November 15 in Raleigh, NC. Aaron Dell took the hard-luck loss with fourth-liner Joakim Nordstrom third period tally being the difference. That game winner remains Nordstrom’s only goal during the current campaign. Dell stopped 32 of 33 shots in his start against the Hurricanes on November 15. Despite the loss, he left PNC Center with a .970 save percentage in the game and gave the Sharks every opportunity for the victory. With San Jose playing last night, he could and should get the nod. 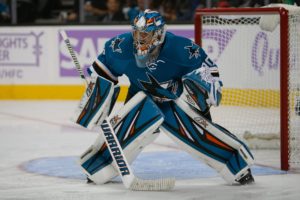 The Sharks power play should not count on much work, and the work it does get will face a stiff test. The disciplined Hurricanes average only 6.7 penalty minutes per game, second in the NHL. And when the rare infraction has occurred, their road penalty kill has a phenomenal 93.9-percent shut-down rate, best in the league. Adding to the Sharks concerns is the three shorthanded goals Carolina has posted when at a man disadvantage.

David Schlemko missed his second straight game last night against Anaheim. He was reported to be close to returning to action, but a decision could come as late as the pre-game skate. The Hurricanes made a roster move early this morning, recalling Michael Leighton from the AHL’s Charlotte Checkers, who lost last night in overtime 3-2 to the Bakersfield Condors. Leighton took the loss for the Checkers, stopping 23 shots, but the quick drive up I-5 means he should be available without incident.

Both the San Jose Sharks and San Jose Barracuda play today at the SAP Center so quick player movements will be possible if head coach Peter DeBoer wants to make any roster adjustments.

It’s been a tale of two seasons for the Canes’ veteran netminder Cam Ward. After a shaky October when Ward posted a miserable 8.57 save percentage, he has got his season back on track. Since November 1, Ward has registered a .938 save percentage and a stingy 1.72 goals-against average, good for sixth and third in the NHL, respectively, during that time frame.

Ward has been solid against the Sharks with a record of 6-1-0 and a 2.67 goals-against average and one shutout in eight career appearances against San Jose. The shutout came in Carolina’s November 15 victory in Raleigh.

1)Road Warrior Kevin Labanc scored his third goal of his NHL season last night and they have all been timely. He’s been skating regularly with Logan Couture and looked better in his play away from the puck lately.

Kevin Labanc scored his 3rd goal of the season. All 3 have come on the road, and all 3 have either tied the game or given SJ the lead.

2)Brent Burns has goals in three straight games for the San Jose Sharks. His 12 goals lead NHL defensemen and his 116 shots on goal leads the entire league.

3)Former Shark Matt Tennyson has found a new home in Carolina. He has appeared in 14 games for the Hurricanes, has two assists and is averaging nearly 15 minutes of ice-time per contest.

4)Mikkel Boedker’s scoring drought has reached 17 games and has just two assists during that span. His last goal came on November 1 in a 3-2 loss to the Arizona Coyotes.

5)Jeff Skinner and Victor Rask share the team lead with nine goals. The first-line duo is also 1-2 on the roster in assists: 12 for Skinner and 10 for Rask.