Fans of the Carolina Hurricanes will endure another season with the almost all the same players from a lackluster past season. In the July edition of the NHL Power Rankings on ESPN.com, the team was ranked in last place on the notion that it this the same team that will take the ice this season. Even though management brought back the same core players, the new coaching staff will now evaluate team chemistry in the upcoming training camp. Bill Peters and staff will be tasked with putting together the best lines for the team. Before training camp, I took a shot at putting together the best lines for the team in the upcoming season.

I wrote before about how Elias Lindholm’s development will play a big role in how the Hurricanes perform this season. Putting him on this high offense first line will give him the ability to show how his offensive game as grown. Lindholm and Jeff Skinner were productive last season when they played on the same line. Skinner scored career high 33 goals last season with Eric Staal as his center. Staal and Skinner mesh well offensively and need to put up big numbers if the Hurricanes want to advance up the rankings. Staal, who is undergoing surgery on an injured core muscle, will need to be huge for the Hurricanes this season. In my opinion this line will give him the best chance to win another cup with the Hurricanes. 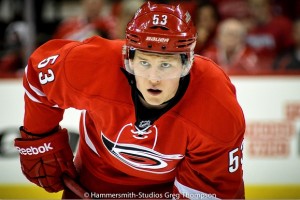 Jordan Staal and Alexander Semin played well together last season and with Semin coming into the season healthy these two will put up solid numbers. Jordan Staal struggled slightly after the trade from the Penguins in his first season in Carolina, but this season they need him to prove he can be that steady two-way player. Last season, Jiri Tlusty played a lot on this line, but I think the coaching staff should give Nathan Gerbe the opportunity to see top-six minutes.  Gerbe scored 31 points last season when Tlusty had 30 points, but Gerbe played in 13 more games. With the little forward depth the team has, I think Gerbe will be more serviceable on the second line with Tlusty pushing the depth on the third line. 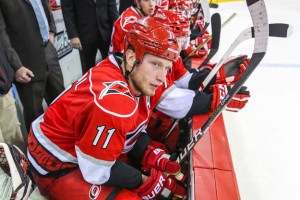 Zach Boychuk has bounced around the AHL and NHL in his short career. He was the leading goal scorer in the AHL last season and a good training he camp should land him a spot on the opening day roster. He fits perfect on the third line with the very thin forward depth in the organization. Riley Nash is not going to put up huge numbers and is probably a fourth line center, but so is Jay McLement. The new coaching staff should give Nash a try on the third line. Gerbe and Tlusty are interchangeable in my opinion and keeping Tlusty on the third line will at least give the team a hardworking scoring option on the back six. 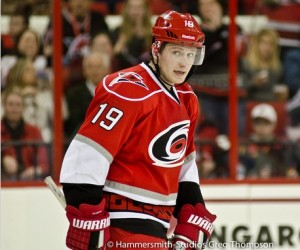 The Hurricanes signed Brad Malone and Jay MclEment in free agency, so I assume they want them to play. Both will take the spots on the fourth line, and have a chance of getting bumped from the roster by the young prospects  like Brock McGinn, and Victor Rask. Patrick Dwyer played a lot on the second line last year, but he is not a top six player. He plays good defense and will help clean up on the bottom six forward lines for the Hurricanes next year.