The Providence Bruins went two-for-three on a recent road trip, defeating Laval 6-3 and Rochester 2-1 in overtime before closing out the weekend with a 4-3 loss in Toronto. It was a positive trip to earn four points before ending with a hard-fought loss to the talented Toronto Marlies.

After returning home, the P-Bruins are joined by a pair of University of Wisconsin Badgers. Boston’s 2016 first-round pick, Trent Frederic, signed an entry-level deal Tuesday and will join Providence on an amateur tryout contract. Frederic won’t burn the first year of his entry-level deal by signing the ATO. Previously, Badgers teammate Cameron Hughes signed a similar deal three days earlier. Hughes was Boston’s sixth-round pick in 2015. The additions provide more depth for Providence and could possibly make a late-season impact.

Frederic is a solid two-way center and has the best chance of the two to make an immediate impact in the P-Bruins’ lineup. Coaches typically have less to worry about with a young player responsible in both ends. Frederic has perhaps exceeded expectations for most outside the Bruins organization. When Boston selected Frederic 29th overall, he was ranked 47th on the list of North American skaters by NHL Central Scouting.

The scouting report on Frederic was he would need to develop more offensively. He quickly became an offensive force for Wisconsin. Frederic was second on the team in goals and points his freshman year, posting a 15-18-33 stat line in 30 games. He followed that up with a 17-15-32 line this season. Frederic chipped in five goals for the United States in seven games at this year’s World Junior Championship.

Frederic could easily slide into the P-Bruins’ lineup soon. Center Jakob Forsbacka-Karlsson remains sidelined with an upper-body injury. With forwards Colton Hargrove and Justin Hickman also missing due to injury, the P-Bruins had to rely on some ECHL call-ups over the weekend. It’s very likely the P-Bruins find a way to keep Frederic in the lineup for the remainder of the season.

Given his history, the physical aspect of the pro game shouldn’t present too much of a challenge for Frederic. His production as a true freshman in college should ease those concerns. There’s a chance Frederic provides an instant spark to the P-Bruins lineup. He went through the U.S. National Development Program and had impressive production in two years of college hockey. Frederic may have been undervalued at the time of the draft, as his play has answered all critics to this point. It wouldn’t be surprising if once gain Frederic quickly adapted to a new level of hockey and contributed to the P-Bruins success this season.

P-Bruins Get a Competitor in Hughes

Wisconsin Badgers captain Cameron Hughes will join Frederic in Providence. Hughes was a late-round pick by Boston in 2015. While his numbers in college don’t jump off the page, there is a lot to like if you’re a P-Bruins fan. Although a late pick, it’s important to remember he was being evaluated for the draft as a true-freshmen, on a losing team at Wisconsin. It’s possible another year in juniors would have helped his draft stock.

Hughes won the award for Wisconsin’s most competitive player during his junior season, which was a career year for Hughes posting a 7-25-32 line in 36 games. Of those seven goals, his offensive skill was on display in one particular play many hockey fans will remember. 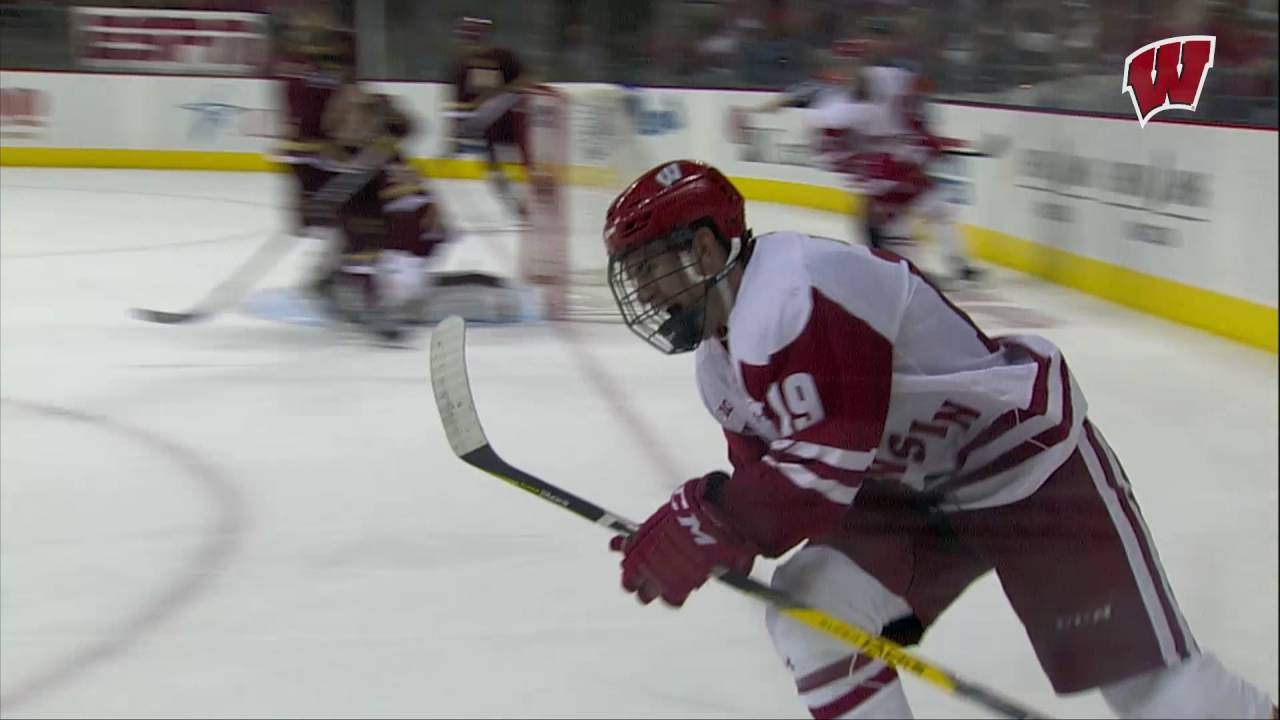 Hughes shouldn’t be written off for more reasons than just a highlight-reel goal and his competitiveness. The organization that drafted him has had recent success when it comes to identifying and developing college talent. Sean Kuraly was a seventh-round pick the Bruins added in a trade with San Jose, while Noel Acciari and Tim Schaller were college free-agent signings. Current P-Bruin and seventh-round pick Hargrove is having a career year in the AHL in his third professional season.

While some players stay longer than others in Providence, the current forward depth in the organization means P-Bruins fans may really get to know and appreciate Hughes as he develops. The younger Frederic is much more physically imposing, but Hughes is a more smooth, natural skater. If he can add some muscle to his listed 6-foot, 175-pound frame, he will be another nice late round pick-up for the Bruins. A potential bottom-six NHL forward, with more offensive capabilities in Providence.

The young additions will provide a needed boost to the bottom of the P-Bruins roster. The team will face North Division opponents Lehigh Valley and Rochester over the weekend before returning to Atlantic Division action against Bridgeport. Hughes and Frederic provide the Providence roster with further depth as they jockey for position in the Atlantic Division. They currently sit in third, a point back of the rival Wilkes-Barre/Scranton Penguins.

A life-long follower of the game of hockey. Communications experience with the AHL’S Portland Pirates, and a former coach at the college club level. Covering the Providence Bruins and prospects.