During a recent game in New Jersey defenseman Anton Volchenkov skated to the Devils bench during a penalty kill after the puck was cleared, hunched over in pain after one of the NHL’s rising stars — Winnipeg Jets winger Evander Kane blasted a shot that he absorbed on the right side of his back. Afterwards, without blinking an eye he told THW that it was no big deal, that it was part of the game and part of his job. Volchenkov, by the way, did not miss a shift.

For players like A-Train, it’s just another day in the life of a defense-first defenseman. They are all over the NHL, these selfless warriors: Dan Girardi of the New York Rangers, Robyn Regehr of the Buffalo Sabres and Brooks Orpik of the Pittsburgh Penguins immediately come to mind. Sacrificing their bodies for the greater good of the team comes as second nature to these guys and often times a blocked shot could lead to a scoring chance the other way or an energy boost to his teammates or home crowd.

For more on Orpik and Girardi follow the links on their names here for the fine work of our own Mike Colligan and Mike Rappaport respectively.

“When he’s on his game like that he’s a real presence out there with his physical play and some of those things. Standing in front of some of the shots he’s standing in front of takes a lot of courage.” — Devils coach Peter DeBoer understanding and praising the value of players like Volchenkov on successful teams.

Here’s an example of some of that “physical play” that coach DeBoer was referencing: 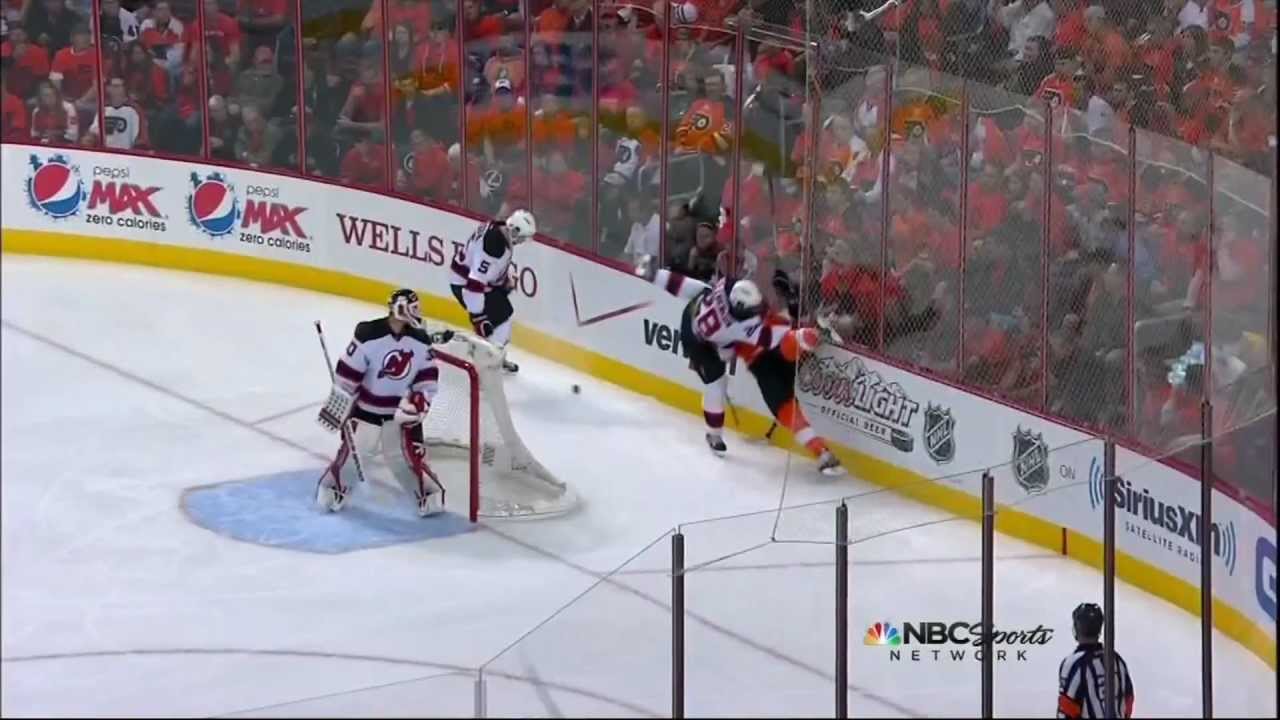 Recently the Hockey Writers sat down with the 31-year-old defenseman from Moscow and he gave us some insight into the life of an NHL shot-blocker and how much he has enjoyed his 2+ seasons in New Jersey.

The Hockey Writers: You blocked at least three or four shots tonight, how are you feeling?

Anton Volchenkov: It’s just part of the game, you know? Sometimes I need to block shots.

THW: After some of the shots you blocked tonight, the following shifts you seemed a little energized and even got a breakaway; how is that possible?

AV: The breakaway? That’s just part of the game, I blocked a shot, rested 15-20 seconds for my body on the bench. Just cooled down a little bit and then go play. For us it was very important to get these two points.

Another game, another couple of bruises for Volchenkov after some more blocked shots:

THW: After a game like this do you sit in an ice tub or do you have ice bags all over your body?

AV: Yeah I’ll use some ice bags for sure, but that’s part of the game. It’s just another day for me, another day for those bags of ice (grins). I will be ready for the next practice and the next game.

THW: Is it nice to see John Hedberg get rewarded with a win tonight?

AV: I’ve known Heddy for three years now; he’s been awesome all three years. Sometimes things don’t work out, don’t go your way, but he made some big saves for us tonight. We needed this win.

THW: As you just mentioned you are now in your third year with the Devils, do you enjoy it here?

AV: From last year, there have been not many changes; it’s pretty much everybody back on the team. Only Zach (Parise) went to Minnesota and Petr (Sykora) isn’t back, but every guy in this room is a great guy, good teammates. I’m very happy being here and playing on this team.

THW: Was it a difficult decision for you to leave Ottawa as a free agent in the summer of 2010?

AV: Decisions are decisions — I spent eight years in Ottawa so sure it was a tough time moving away from a place you played in for long time and my teammates. But it’s hockey, and I’m a professional; sometimes you need to have things change. Sometimes you have to work for another team — it’s good to experience that. Some guys like to change teams every three years, but for me I just want to stay with one team. I’m happy here in New Jersey; it’s been great here, good guys, good friends.

THW: You and Bryce Salvador make a pretty formidable duo on the PK, talk a bit about the chemistry between the two of you…

AV: Sal and I are pretty similar players, we try to play hard and block shots. I understand him and Sal understands me. Last year was great for us, especially on the PK, this year has been a little tougher there so it’s still a work in progress. It’s working lately though and we keep working at it. This is a different season than last season though — because there are too many games in short amounts of time. But I’m happy playing alongside Sal.

Watch as A-Train makes a save in the crease while on his knees:

THW: Every defenseman on the Devils brings a little something different to the table, is that accurate in your mind?

AV: Some of the guys are more skilled than others and some guys are more defensive-minded. Some protect the front of the net, some go into the zone with the forwards to try and score goals. Pretty much every team is like that though, all of the defensemen on this team are great though (smiles).

If there’s a player you would like to see a Q & A with or a question you’d like me to ask someone feel free to contact me.