It’s been four years since Blake Coleman was drafted by the New Jersey Devils in the 3rd round at the 2011 NHL Draft. Four years is a long time, almost seeming like an eternity in the hockey world, for a player to be somewhat off of it’s fans radars. But for Coleman, a 23-year-old from Plano, Texas, the four years he spent at Miami University playing for the Redhawks has been invaluable to his development both on, and off, the ice. He has been attending the franchise’s development camps every summer since he was drafted and now, with his college career finished he is eager to begin the next chapter of his hockey career, and life, with the Devils.

He scored 60 goals during his four years with the Redhawks, including twenty this past season — setting career highs in all statistical categories during his senior season. Now that he has signed his entry-level contract he will begin the journey of a professional player, whether it be in Albany (AHL) or New Jersey during the 2015-16 season and he is ready for that challenge. Last season in the NHL there were only two regular players that called the state of Texas home — Nashville’s Seth Jones and Winnipeg’s Tyler Myers — and with many changes already having taken place on the Devils roster since the new GM and coach took over Coleman could very well make it three NHLers from the Lone Star State if he has a good showing at New Jersey’s upcoming training camp in September.

After the final day of the Devils Development Camp in July The Hockey Writers spoke with Blake Coleman about a plethora of topics including if this camp was different under a new regime in New Jersey, his college career, a future teammate from his university and what other sports he is a fan of (he’s from Texas, take a guess what pro team he likes).

The Hockey Writers: You’ve been to a few of these development camps with the Devils, how was this one and was it any different than the others?

Blake Coleman: It was good, was nice to come in and there’s a whole new staff obviously; see how they run things, it was a little bit different than in the past. For the most part it was a pretty similar structure, off the ice at least. It’s always good to come back and re-familiarize yourself with things.

THW: One of the off-ice things you did as a team was going to a New York Yankees baseball game last night, how much fun was that?

BC: It was a blast; we had a lot of fun. It’s not something most of these guys get to do, especially the Canadian kids and European guys. It’s fun to get away from the rink for a little bit and get to know some of the guys better and also talk to the staff in a less, professional environment. I think everybody enjoyed it.

THW: Any different feeling or expectations for yourself now that your college career is over and you signed your entry level contract?

BC: I don’t know about different, as far as my approach goes; everything will be the same and I’ll train hard in the summer. Wherever I play I’m going to come in and compete, and do what I can to be the best player I am. I don’t think anything will change in my approach really, but it’s definitely exciting taking the next step and starting my pro career.

THW: As we just alluded to, you just completed four years of college at Miami University, what was your college experience like?

BC: It was great, four of the best years of my life and a lot of good friends that I will have forever. On the hockey side of things, it was really good for my development; it’s less games than most seasons, so you work a lot on your physical strength and a lot more off-ice stuff. Technical stuff, and it’s good to get that work in while you are young. On the ice we had some good success during my four years, we won a couple of championships and like I said a group of guys that will be special in my life for the rest of it.

THW: This past season you had a phenomenal year with 37 points (20g-17a) in 37 games, was there any particular reason in your mind that you were so successful?

BC: You just have to believe in yourself, believe that you’ll get better each day. Opportunities come up, and the coach puts a little more trust in you; if you can produce then he keeps showing that trust and that’s how things start to get going. It kind of allowed me to make plays and as long as i was responsible at both ends, (I played more), like I said it was a blast. To get to play that much, have a bunch of good guys in the locker room (around me) it makes for a good time — it makes hockey enjoyable.

THW: How familiar are you with some of the players that are now in the NHL that came through Miami University, including Devils defenseman Andy Greene?

BC: They do a pro week up at Miami and (a lot of) the guys come back and skate; you go to dinner with them to kind of get to know them. Obviously some of them I played with during my four years and have had success — guys like Reilly Smith and there’s a lot of guys in the AHL too like Curtis McKenzie. Those guys are great and always come back, we have a good time. Andy, the times that I’ve met him, has been incredibly down-to-earth, easy to talk to; I look forward to getting to see him in (training) camp and kind of learn from him a little bit — see how he approaches the game. I’m excited for that.

Blake Coleman goes to the front of the net and scores a goal (smart kid!): 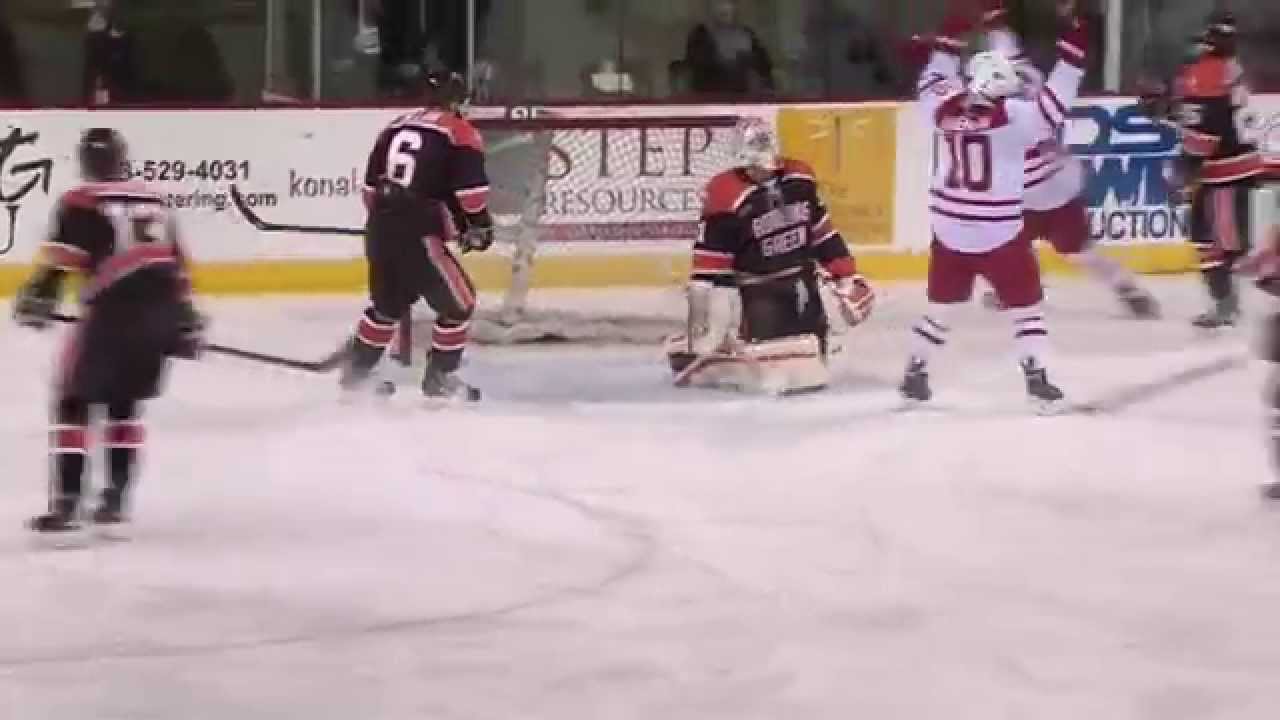 THW: You were drafted four years ago at the 2011 NHL Draft; what do you remember about that day and were you surprised New Jersey selected you?

BC: I was there at the draft in Minnesota; I talked to Jersey maybe a week before the draft, did some testing for them and I thought things went pretty well. But, you never know with those things. I had my family there with me, and my advisor at the time — hearing your name called is something you never forget. It was a really emotional and exciting time for me and the family. Going down and meeting the (Devils) staff, doing all the pictures…all that glamour stuff is great but mostly just being able to spend that time with my family is something that I’ll always remember.

THW: Any other sports you are into besides the obvious hockey, and baseball like we talked about earlier?

THW: We were going to say you must be a football fan being a kid from Texas…

BC: Of course football, (smiles) it’s built into you when you are a kid down there. I like all sports, like we said with baseball you can hang out and talk — it’s more of a social event than anything else. Obviously the Yankees are one of the more famous, known teams in baseball, so it was a cool experience to go to a game there.

THW: Do you have a favorite athlete in another sport?

BC: I’m a big Dez Bryant fan, the Dallas Cowboys wide receiver. At least on the field. Some of his off-field antics are not up to par, but he’s exciting to watch as a Cowboys fan. He played at Oklahoma State in college and I followed them (when I was younger).