The Calgary Flames were desperately trying to hold onto the final Wild Card spot in the West. The Vancouver Canucks were just trying to stay in the race. It made for an intense affair on Saturday night in Vancouver.

The last time these two teams played in Vancouver, Ryan Miller was the story. He stymied the Flames even though his team was badly outplayed. The Canucks put up a better effort through 40 minutes but sat back in the third as the Flames poured it on. Miller once again put the Canucks on his back, and he was almost perfect in the contest. However, Mark Giordano beat Miller with 5.6 seconds left on a goal Miller likely wanted to have back. 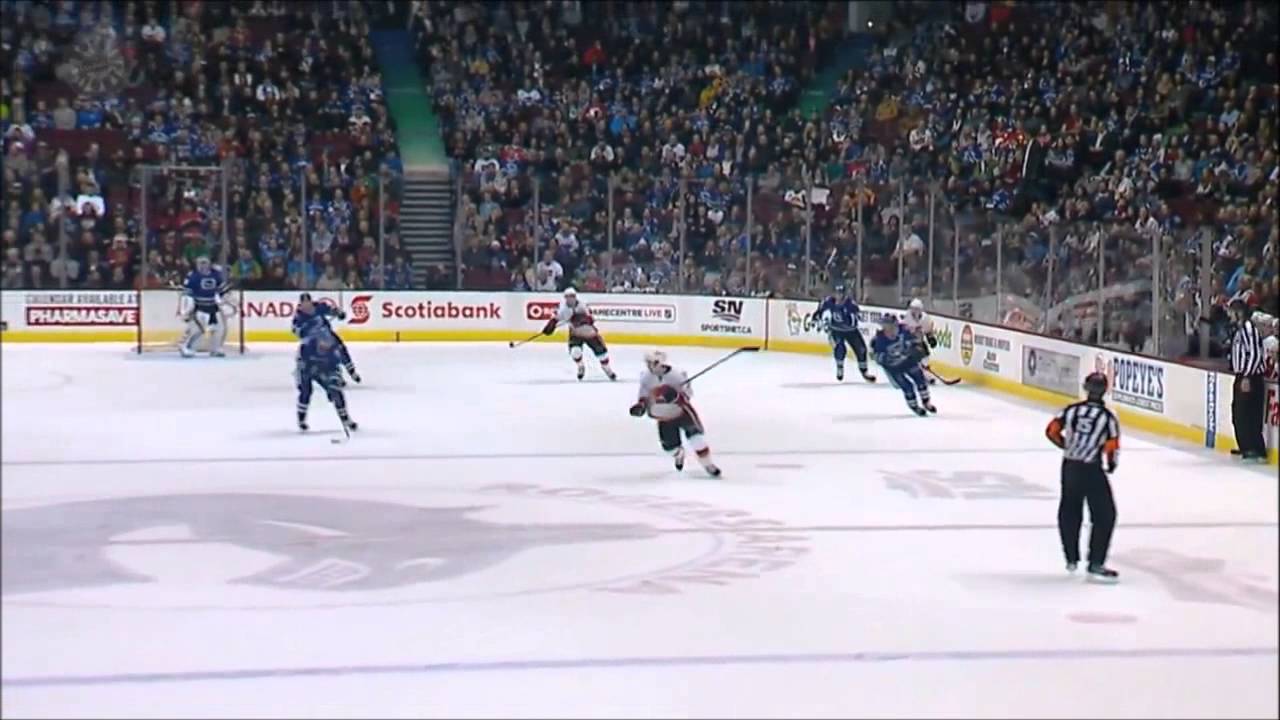 There might not have been many goals, but tempers were flaring up as the game went on. Troy Brouwer and Nikita Tryamkin were battling throughout the game. Micheal Ferland laid out Loui Eriksson in the third period. It seemed like all the Canucks were trying to rub out Johnny Gaudreau.

“We have to treat every game from here on out like a playoff game,” said Bo Horvat during Hockey Night in Canada’s After Hours segment. With the win, the Canucks are still sniffing around the playoff race. They are four points back of the Flames for the final Wild Card spot in the Western Conference.

The Canucks played their style of hockey in the opening minutes, which means primarily spending time in their own end. Calgary outshot the Canucks 5-0 over the first 12 minutes of hockey, but the Canucks kept most of their shots to the outside. Alexander Edler scored on Vancouver’s first shot of the game, and it’s a goal Brian Elliott would sure like to have back.

The knuckler shot from centre ice dipped underneath Elliott’s glove for the game’s opening goal. The surprise marker seemed to spark the Canucks, who had a few good chances after the goal. Minutes later, Elliott robbed Horvat on an odd-man rush. Horvat hammered in his rebound, but an early whistle robbed the Canucks of an early 2-0 lead. Elliott used his noggin to make another good save off Daniel Sedin on the power play before the end of the period.

Looks loose to me. @Canucks pic.twitter.com/4jon1Mxu1v

A couple of early power plays slowed momentum early in the period, although Jannik Hansen was almost able to bury one home. Elliott came across the crease to rob Hansen of a goal.

The game really started to open up later in the period, with both teams swapping fabulous chances. Matt Bartkowski almost scored against his former team, clanking one off the post. Markus Granlund nearly continued his success against the Flames, but he was unable to bat the puck into an open net.

“It’s got a playoff feel, guys are battling out there,” said Troy Brouwer during the second intermission. Intensity picked up in the second, with Brouwer and Tryamkin battling each other on multiple occasions. Alex Burrows and Lance Bouma had a skirmish, while Sean Monahan and Brandon Sutter were jawing with each other at the end of the period.

Weird, Troy Brouwer's fighting style changes to "pull jersey to blind guy then fall to the ice in a panic" when it's against Tryamkin pic.twitter.com/NsrFVCWYI4

From the drop of the puck in the third period, the Flames poured on the pressure. The Canucks took a couple of penalties early in the period, which allowed the Flames to gain momentum. They didn’t relent for the entire period, but Ryan Miller was able to keep the Canucks in the game.

Henrik Sedin took a hooking penalty with 2:11 remaining in the third period, gifting the Flames with a glorious late opportunity. However, the Flames were unable to gain control of the zone for the majority of the power play. It looked like time was going to run out for the Flames, but they were able to gain the zone with just seconds on the clock. Mark Giordano threw a puck on net with a hope and a prayer, and it found a way past Miller with 5.6 seconds left in the period.

The Canucks were guilty of sitting back way too much in the third period, and they were never able to gain momentum after a couple of early penalties. The shots were almost even after two periods, but Calgary pulled away with a 17-2 shot advantage in the third.

Chris Tanev doesn’t usually jump up in the rush but when he does, watch out.

The defensive stalwart hadn’t scored a goal all season long. Just over thirty seconds into overtime, Daniel Sedin hit a speeding Tanev as he flew over the Flames blueline. Going in all alone on Elliott, Tanev was able to fire it upstairs for the game-winning goal.