In the New York Islanders’ 43-year history they have drafted 53 players in the first round of the NHL Draft. Of those selections, 16 were defensemen. Their first, Denis Potvin, went on to become one of the best defensemen in the history of the league. The jury is still out on their last, Ryan Pulock.

The 2013 first-round pick was on target to make the team out of training camp last season but a groin injury suffered in their lone preseason game held at the Barclays Center effectively ended his chances to make the Islanders and paved the way for Griffin Reinhart, the 2012 first-round pick t 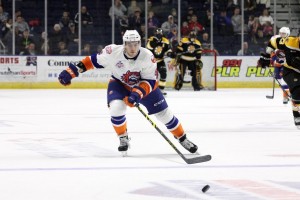 The Manitoba native had a strong offensive season for the Sound Tigers. His play earned him an AHL All-Star Game nod. He scored 17 goals, 13 of which came on the power play. He can pinch in the offensive zone when need be or he can rocket home a 100+mph slap shot from the point.

Pulock’s skills could help the Islanders’ power play, which struggled heavily down the stretch in the regular season and went scoreless in 14 attempts during the 7-game series to the Washington Capitals. The 20-year-old was called up to the team during the latter half of that series due to injuries to Calvin de Haan and Lubomir Visnovsky but did not dress. Reinhart got the call over Pulock in Game 5, while Matt Donovan and Scott Mayfield suited up in Games 6 and 7. Reinhart struggled in Game 5 while Donovan and Mayfield played admirably in 6 and 7. Reinhart was traded to the Edmonton Oilers at the draft this past June thereby cementing Pulock as the Isles top defensive prospect.

Speaking of prospects, Pulock’s offensive skills were showcased during the Islanders prospect game at the Barclays Center last month.  All eyes were on him during the hardest shot competition which followed the game. Pulock easily won the contest with a 105 MPH slap shot. It brought back memories of Larry Bird dominating the three-point contest during the NBA’s All-Star Weekend.

Pulock’s game has already been compared to all-stars like Nashville Predators Defenseman Shea Weber and Montreal Canadiens Defenseman P.K. Subban as well as Hall of Famer Al MacInnis. Those are some lofty shoes to fill. MacInnis is the comparison I want to focus on. The 15th overall pick in the 1981 draft had a rocket of a slap shot, resulting in winning the hardest shot competition at the NHL All-Star Game 7 times. He entered the league as more of an offensive defenseman but as the years went on MacInnis developed into a more complete defenseman. I’m not saying Pulock is MacInnis but the fact that some are already comparing him to the 7-time 20+ goal scorer means the Islanders might have something special.

If Ryan Pulock wants to make the Islanders out of training camp this season he needs to prove to Head Coach Jack Capuano and General Manager Garth Snow that he can win the job. If he can build upon the skills that he showed in the prospects game he should begin the season as a third-pairing defenseman.  I can clearly see him as the part of the 2nd power play unit to begin and should move up the Isles depth chart and take his place alongside Travis Hamonic on the 2nd pairing in no time. Double-digit goals and 35-40 points is not out of the question and he should contend for the Calder Trophy.

The Islanders’ 16th first-round defenseman will indeed be sweet.