The most important men stepping on the ice tonight will not be wearing the black and gold of the Bruins or the classic red and black of the Blackhawks.  They also won’t be wearing a finely-tailored tuxedo with a gold lamé vest and bowtie. (Apologies to Rene Rancourt)

No, the men who’ll help decide the flow (though hopefully not the outcome) of tonight’s game will be wearing the familiar zebra stripes of the NHL Officials.  Tonight’s crew returns from Game 1 of the series:  Chris Rooney (#5) and Brad Watson (#23) in the orange armbands, and linesmen Shane Heyer (#55) and Brian Murphy (#93) without.

This is the fourth time Rooney and Watson have been paired up in the postseason.  They were on the ice for two conference finals matchups – Chicago’s 3-2 win over the Kings in Game 4 and Boston’s dominating 3-0 Game 1 victory over Pittsburgh.   Most recently, they officiated Game 1 of the Stanley Cup Final.

Game 1 saw very few trips to the sin bin. Rooney and Watson called only three ‘judgment penalties’ – along with three bench-minors for too-many men on the ice.  When you factor out the bench penalties, one by Boston, two by the Blackhawks – Game 1 had the fewest penalties of any game of the playoffs aside from Furlatt and Walkom’s near-inexplicable  two-penalty Game 6 between the Kings and the Blues.  Either the Finals opened with a very clean game, or Rooney and Watson were determined to let them play and decide it on the ice.  (I’ll go with the latter.)

The dynamic duo called just one ‘judgment’ penalty over the last 66:17 of game play they officiated. Apparently, the longer the game, the heavier those whistles get for Rooney and Watson. Those whistles got so heavy that the officials just left them in their pockets.

After Game 1, The Score’s Dave Lozo weighed in on the officiating:

As did Pat Leonard of the NY Daily News, though a little less favorably:

Game 2 of the Stanley Cup Final saw another referee with a heavy whistle, as it took referee Wes McCauley a bit longer than intended to stop the action. The Hawks’ potential second goal was waved off – a ruling supported by the NHL’s War Room in Toronto, as there was no video evidence to overturn the call on the ice.

The puck crossing the line did not seem to be the issue. McCauley indicated his intent to call the play dead, as relayed by Chicago coach Joel Quenneville in his comments yesterday via conference call: “[McCauley] said his intention was to blow the whistle.”

The NHL’s official decision differed slightly on the techincality of whether he actually blew the whistle or just intended to, saying, “The referee had blown the play dead prior to Chicago Blackhawks forward Marian Hossa pushing the goaltender’s pads and the puck across the goal line. No goal, Chicago.”

In either case, the decision was made, and it was the right one.  See for yourself.

Outside of that it was a rather quiet, evenly called game with the teams exchanging power plays.  The visiting Bruins ended up with one more call than the home club, which has been par for the course in this year’s playoffs. Road teams are averaging over half-a-penalty more per game.  In six of the nine Conference Finals games, the road team received more penalties than the home club.

South Boston’s finest returns to work a game in his hometown for just the second time this postseason, and fourth time all year. In his second-straight year in the Finals.  Game 1 was the Bruins’ first playoff loss of the year under the watchful eyes of Chris Rooney.  Coming into the Finals, they’d gone a perfect 3-0 in the postseason.  They fare far worse in the regular season, posting an 0-4 record.  With their Game 2 victory, the Blackhawks improved to 5-1 this year under Rooney. They posted a spotless 2-0 record in the regular season and have gone 3-1 in the playoffs, winning one against the Kings and splitting games against the Wings before taking the opening game against the Bruins.

Not everyone is a fan of Rooney (or his possible conflict of interest in this series):

His 17-year NHL officiating history makes Watson the veteran of this duo, as do his seven years of Stanley Cup Final appearances.  Game 1 of the series was the first time all year – regular season and playoffs – Watson saw the Bruins lose a game.   Boston came into that match with a perfect 5-0 record when the Regina native was working the game.

The Hawks improved to .500 under Watson in the playoffs (2-2), after a 3-0 record in the regular season.  Both their playoff losses under Watson came on the road. 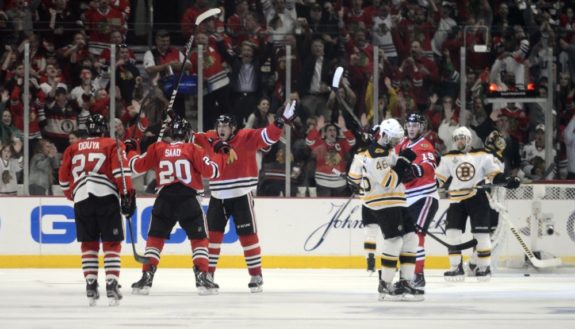 What It Means for Game 3

In the Stanley Cup Final, the officials seem to be determined to let the players play. (Sean McIndoe makes a great case for maintaining the same standards for penalties and making the players responsible for how much they ‘play’ over at Grantland )

Only one judgment penalty (excluding bench minors and puck-over-glass, which thankfully, has yet to rear its ugly head in the Cup Final) has been called in the third period.  None have been whistled in the last half of the period, when pretty much anything goes.  In overtime, the only penalties were a pair of too-many-men calls against the Hawks in Game 1.

Both these teams have posted similar penalty numbers this postseason, with Chicago averaging 8.9 penalty minutes per game and the Bruins slightly higher, with 9.7 minutes per game.  Expect Rooney and Watson to call it tight, which will minimize any differential in penalties. Of course, that differential only matters if you can take advantage of it…

Neither team has been impressive with the man advantage.  Pathetic would be a better word.

Chicago has been terrible with the man advantage and it’s getting worse.  In the first round, they scored on 15.3% of opportunities.  That rose to 16.6% in the second round. In their third-round matchup against the Kings, they went only 1-for-14 – that’s 7.1%.  Chicago’s scored just once in their last 29 power plays. The Hawks’ last power play goal was back in Game 2 against the Kings, when Bryan Bickell scored to put Chicago up 3-0 with what would eventually be the game-winning goal.

The Blackhawks are scoreless in their last 15 attempts, including six chances in the Cup Final.   Even worse are their road numbers.  The Hawks are just 1-for-22 outside of the Windy City, with their lone road power play goal scored by Marian Hossa in Game 6 against the Red Wings.   That doesn’t bode well for tonight’s tilt.

It’d be a huge boost for the Blackhawks if they could find a way to score on the power play.  They’re a perfect 6-0 in the playoffs when they score a goal with the man advantage.

“I think you’ve got to expect at some point you’re looking for some production [on the power play]. I know that both sides, they’re looking for their power play to get some production ’cause there’s not a lot of high-quality chances five-on-five. At the same time we’ve got to look to, you know, maybe simplify it and play anything at the net, [generate some] second and third opportunities around there.  The pretty plays aren’t there. If we think the pretty plays are there with power plays, they evaporate quickly.”

“Well, I mean, I think you have to give them some credit. They’ve played good on the penalty kill.  Obviously that’s a point, the power play; it’s an area that we’re trying to get better at. We did some good things. I think we had some really good chances there, that first power play especially. I know personally I had a chance there, and the puck just bounced over. Sometimes it’s just a fine line between scoring and not scoring. The more times we can get pucks at the net and keeping it simple when things aren’t going well, I think the better off we’re going to be.”

The Bruins have gone 8-for-50 (16.0%) on the power play in the playoffs, with an even-worse 11.5% success rate at home.  They’ve scored once in their past 20 opportunities. That goal came in Game 1. It was the only goal scored this series with the man advantage for either side.  Patrice Bergeron’s power play tally gave the Bruins a 3-1 lead, a lead they would eventually lose in a game they would drop in overtime.

Power play shortcomings aside, when it comes to special teams, the penalty kill is where both the Bruins and Blackhawks excel.

Chicago has the best kill in the playoffs (93.7%), allowing just four goals in 63 chances. On the road, they’ve given up only one power play goal against, posting an impressive 96.4% kill rate.  Chicago needs to be careful about overconfidence in their penalty killers.  While they’re the best, they’ve been getting worse as the playoffs go on.  After going  a perfect 17-for-17 (100.0%) in the first round, they dipped slightly to 23-for-24 (95.8%) against the Wings.  The Kings found a way to convert a few more times, pushing the Hawks down to 15-for-17 (88.2%). Over the first two games of the series, they’ve gone 4-for-5 (80.0%), a number they hope to improve upon tonight.

Hawks winger Patrick Kane spoke to the media yesterday about Chicago’s shut-down abilities.  “Our penalty kill’s been great all year, to the point where we’ve won a lot of games because of it. It’s given us a lot of momentum. It would be nice to see the power play return that.” 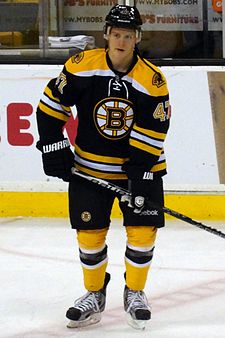 Boston may not be the top ranked penalty killing team over the whole postseason, but they’ve been the best over the past two rounds.  Where Chicago has fallen off a bit, the Bruins have improved each time they’ve advanced.  They opened the playoffs with a near-bottom 76.2% penalty kill against the Leafs. They improved to 14-for-16 (87.5%) against the Rangers.  Since then, in six games against the Penguins and Blackhawks, they’ve been a perfect 21-for-21 (100%), with 22 straight penalty kills dating back to Game 5 against New York.

With the weakness of the Hawks’ power play on the road up against Boston’s perfect penalty killers, don’t count on Chicago to gain much ground with the man advantage.  They’ll have to hold off the Bruins’ power play – finding some of the penalty-killing magic that helped them early on in the playoffs – and win the game five-on-five.

These two teams are evenly matched at even strength.  Calls will also be equally distributed, as will missed calls. Most of those opportunities will happen in the second period, as the refs will pocket their whistles in the third and in any extra sessions.  Given the scarcity of penalties, the value of a power play goal is huge.  One goal can – and probably will – decide the game.  More than likely, that goal will come in overtime. Just don’t expect it to be on the power play*.

(*Unless tonight is the night that puck-over-glass will be called late in the game or in overtime, resulting in a game-winning power play goal.  There’s something to be said for a penalty that is automatic regardless of the score, time, or situation.  Isn’t that the type of consistency we should be striving for with other types of penalties, too?)

One final thought from TSN’s Gord Miller: As these games go into overtime after overtime – and hopefully we’ll see some bonus hockey tonight – it’s a lot more work for the officials:

As tired as the players are, take a moment to think about referees C. Rooney and B. Watson and linesmen S. Heyer and B. Murphy #longnight