Since the Buffalo Sabres’ inaugural 1970-71 season, sweater numbers have held a special place in the team’s tradition.

The Sabres have retired seven jersey numbers in their history which include sweater Nos. 2, 7, 11, 14, 16, 18 and 39. Meanwhile, some of the most popular jersey numbers throughout the team’s history include Nos. 17, 19, 23 and 24. On the flip side, a very limited amount of players have worn sweaters numbered 50 to 59. In fact, according to Hockey-Reference.com, just 22 players in the team’s history have worn a jersey with a number in the 50s.

The only player on Buffalo’s active roster to wear a sweater number in the 50s is defenseman Rasmus Ristolainen. In addition, the 22-year-old is on a short list of five players who have donned the No. 55 jersey in Sabres’ history. Ristolainen has gobs of talent and a great opportunity to become an important defenseman for Buffalo in the years to come. The youngster will add an intriguing chapter to the history of No. 55 for the Blue and Gold.

The data for this article was compiled using Hockey-Reference.com.

The Sabres were in the NHL for almost 20 seasons before jersey No. 55 was worn for the first time. Defenseman Joe Reekie was originally drafted by the Hartford Whalers in the seventh round of the 1983 NHL Entry Draft. However, he was selected in the sixth round upon re-entry in the 1985 NHL Entry Draft by Buffalo.

Reekie wore a few sweater numbers during his tenure with the Blue and Gold including Nos. 27 and 31. During the 1988-89 season, Reekie became the first member of the Sabres to wear jersey No. 55. Reekie’s NHL career spanned 902 games where he scored 25 goals, 164 points and 1326 penalty minutes. In addition to Buffalo, Reekie played for the New York Islanders, Tampa Bay Lightning, Washington Capitals, and Chicago Blackhawks.

Defenseman Reed Larson is another player with great longevity in the NHL where he played in 904 games. Larson was selected by the Detroit Red Wings in the 1976 NHL Amateur Draft. The veteran spent the majority of his NHL career with the Red Wings. He later played for the Boston Bruins, Edmonton Oilers, Islanders and the Minnesota North Stars.

In March 1990, Larson signed with the Sabres as a free agent. Larson appeared in just one game for Buffalo during the 1989-90 season where he wore the No. 55 jersey. During his long NHL career, Larson netted 222 goals, 685 points and he logged 1391 penalty minutes.

Forward Denis Hamel was originally drafted by the St. Louis Blues in the sixth round of the 1995 NHL Entry Draft. The Sabres acquired Hamel in a trade that sent defenseman Charlie Huddy to St. Louis. Hamel played in 130 games for Buffalo from 1999-00 through the 2002-03 season. The forward later played for the Ottawa Senators, Atlanta Thrashers and Philadelphia Flyers. In 192 career NHL games, Hamel scored 19 goals and 31 points.

Currently, Jochen Hecht wore sweater No. 55 for the longest amount of time of any player in Sabres history. Hecht was drafted in the second round of the 1995 NHL Entry Draft by the Blues. Edmonton acquired Hecht in July 2001 and he was traded to Buffalo in June 2002.

Hecht began his tenure with the Sabres by wearing jersey No. 71 during the 2002-03 season. He later made the switch to sweater No. 55 and continued to wear the number with Buffalo through the 2012-13 season. In 833 NHL games, Hecht scored 186 goals and 463 points and 613 of these games were played as a member of the Sabres. 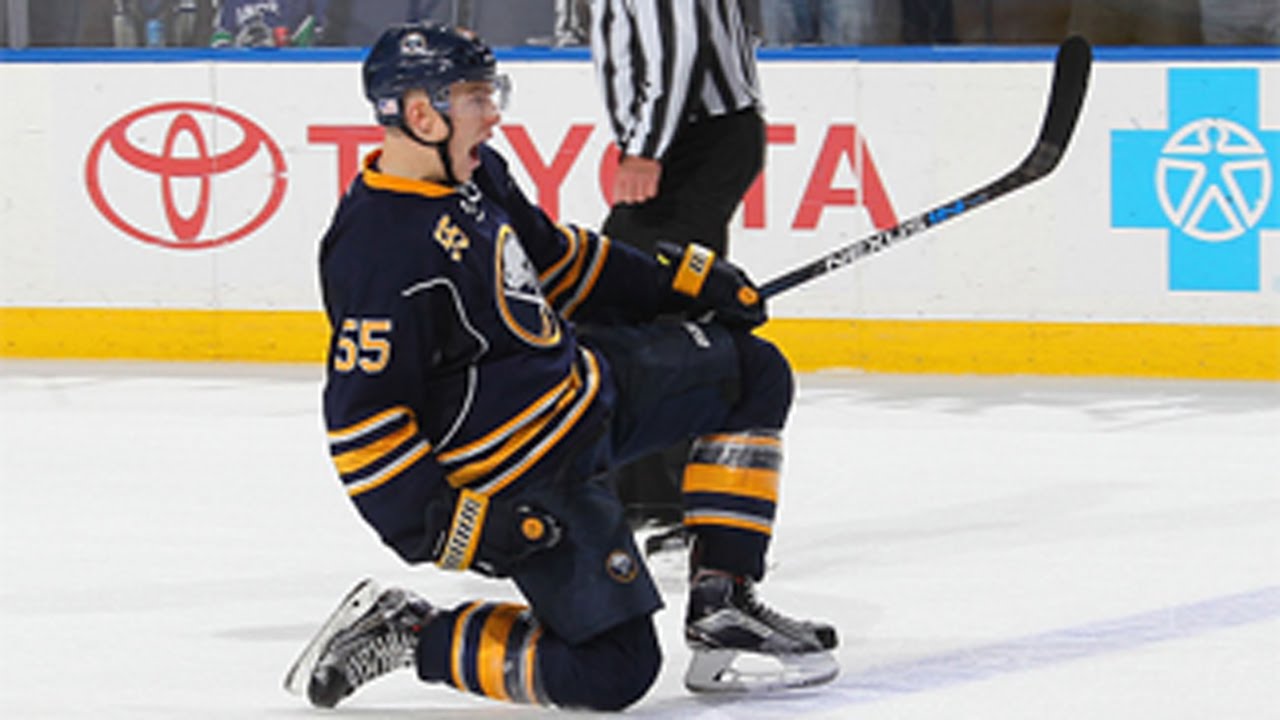 The legacy of the No. 55 jersey was passed to Rasmus Ristolainen when he began his NHL career during the 2013-14 season. The Sabres drafted Ristolainen with their eighth overall selection in the first round of the 2013 NHL Draft.

The youngster joined the team while it was in the midst of a rebuild. He has since emerged as an important piece of the puzzle for the team’s future. Ristolainen is looking to build on the strength of his 2015-16 campaign where he scored nine goals and 41 points. The 22-year-old has nine assists in the early-going of the 2016-17 season and is in search of his first goal.

Ristolainen continues to develop his game while adding to the next chapter of sweater No. 55 in Sabres history.