The biggest reason the Edmonton Oilers rebuild has taken so long is because of poor scouting and drafting. The truth is in the pudding when you dig back to the 2010 NHL Entry Draft when the Oilers officially kicked off the rebuild during the “Taylor Vs Tyler” draft year.

The “Taylor Vs Tyler” debate aside the Oilers hindsight has shown the Oilers missed throughout the draft, overvaluing some players in key draft positions that have caused the rebuild to languish. Now it takes more than one bad draft year to thoroughly put an organization in the NHL basement but one bad year, especially missing in the first round definately sets a franchise back.

Luckily for the Oilers whether they took Taylor Hall or Tyler Seguin they would’ve had a surefire first-line NHL player so missing in the first round wasn’t going to happen. However the depth in the draft selections the Oilers made afterwards shot the Oilers rebuild in the foot before it could even get off the ground.

Edmonton missed on three 2nd round picks (see below) and that cost them in the long-run. A lot of the blame eventually rests on the shoulders of former GM Steve Tambellini and Head Scout Stu MacGregor for the huge blunders that were made on draft day.

In total the Oilers selected 11 players with only Hall becoming an NHL regular up to this point in time. This was a huge draft for the organizations timeline and the Oilers made some heavy mistakes in hindsight. Let’s review.

Career Synopsis: Once again “Taylor Vs Tyler” debate aside Hall enters his sixth season in Edmonton this year if you can believe that. Until the arrival of Connor McDavid, the soon to be 24-year-old has been the driving engine for the Oilers to mixed results.

Injuries have played a part in Hall developing his consistency and taking his game to the same level that the guy who went No.2 has. Still this has been a solid addition to the Oilers franchise and if you compare the points-per-game average between Hall and Seguin, Hall averages out 72 points/season to Seguin’s 65 points/season.

Seguin has been the better of the two the last two seasons however outscoring Hall both years.

Career Synopsis: Pitlick was an overage pick that was playing out of the University of Minnesota-Mankato at the time of his drafting and looked like a decent speedy forward that had the ability to throw his body around. Unfortunately since then injuries have essentially derailed what looked like a promising prospect at the time.

To summarize this in a nutshell, Pitlick has not played a full season at the pro level without injury and played a combined 27 NHL games scoring just 3 goals. Pitlick was sent down to the AHL Bakersfield Condors to start the season and is an RFA next summer.

His future with the organization is at a crossroads.

Career Synopsis: After being drafted the Oilers had Marincin pegged to be a future No. 3/4 defenseman long-term. Even so Marincin played a key role in the AHL playoff run in 2013.

The downside however has been his lack of physicality for a defenseman with his towering frame. Marincin is a decent mobile defenseman who played for Slovakia at the 2014 Sochi Olympics but got passed by Oscar Klefbom, Justin Schultz and Darnell Nurse on the depth chart.

This made him available and the Oilers moved him to little return which ruffled some feathers amongst the fanbase.

Career Synopsis: Hamilton showed a lot of promise in the early going and looked like a future hard-nosed third line LW for the Oilers. He even played for Canada at the 2011 WJC and had 4 goals in 7 games.

After that he struggled with consistency, staying healthy and adjusting to the pro game. All in all Hamilton played in 1 NHL game for the Oilers and had a career year in the AHL scoring 12 goals and 32 points in 63 games last year.

Unfortunately it wasn’t enough to be tendered a qualifying offer by the Oilers and he became a free agent with no NHL takers.

Career Synopsis: Talk to his peers and coaching staff in junior and they’ll all say the same thing — Martindale was a talented player. Unfortunately he got in his own way as much as he contributed to his talent and didn’t make the transition to the pro level as smoothly as management would have liked.

At the time he broke into the pro level the NHL was going through the 2012-13 lockout limiting his role with the team and costing him half a development year. The organization also had Ryan Nugent-Hopkins, Sam Gagner and Anton Lander coming through the pipeline which would’ve either put Martindale on the wing or at the bottom of the NHL roster long-term projections.

So he became expendable and once again injuries didn’t help his cause either. The Oilers eventually moved Martindale to Florida in January 2014 before ending up in Tampa Bay where he attended training camp this season as a free agent.

He’s never played in the NHL and or a full-season in the AHL.

He now looks like a career AHL depth player having played 180 games and scoring 67 points (30 points/full-season).

Career Synopsis: Blain was looking like a long-term project on defense that could turn out to be a future No. 4/5/6 on the Oilers blueline. He was a physical defender that was coming off a career year offensively in junior that needed to round out some edges.

Unfortunately he never was able to round things out and the Oilers allowed him to re-enter  the 2012 NHL Draft. He went unclaimed and signed an AHL deal with the Chicago Wolves (Vancouver Canucks affiliate at the time) and bounced around in the ECHL with multiple teams.

Since he hasn’t managed to be an AHL regular and spends an equal if not more time in the ECHL. It’s worth noting Blain is in the last year of his contract as well and is looking more and more that he won’t be re-signed.

Career Synopsis: Believe it or not Bunz was one of the  more underrated goaltenders in his draft year and the Oilers believed they had a steal. He was a decent starter who two years after his draft year was named Top Goaltender in the WHL.

He was the goalie of the future behind Devan Dubnyk (let that statement set in). The Oilers took the ECHL deveopment route which is common for most goaltending prospects and he was a backup for the 2013 Kelly Cup finals run.

Yet it was his small stature isn’t enough to overcome decent positioning and technical skills. He hasn’t put enough consistency together to warrant anything more than being an ECHL goaltender, and not a strong one at that.

He was extended a tryout offer in the ECHL this season.

Career Synopsis: It hasn’t been all doom and gloom for this draft year. Davidson has always projected to be a No. 5/6/7 defenseman and is still on pace to be an eventual No.6/7 with the Oilers all things considered.

He overcame a cancer scare very early into his pro career and has managed to make a bit of a comeback. The reality of it is he’s a one dimensional defensive defenseman and doesn’t do a lot to stand out on the ice (not that that’s a bad thing).

Davidson’s drive far exceeds his natural talents and that competitive nature is why he’s still battling for NHL minutes. The only defenseman left in the organization from his draft year.

Career Synopsis: This is the first of two unfortunate circumstances to come out of the 2010 NHL Draft. Czerwonka played a key role for the 2011 WHL Champion Kootenay Ice that went to the Memorial Cup before becoming captain in 2011-12.

He was a hard-nosed checking line forward that played a decent two-way game and wasn’t afraid to mix it up with a fight or two. The reality of it came head on during the 2012-13 season when he retired in his last year of junior eligibility.

Czerwonka made the bold decision to leave hockey and return to school. Mounting injuries were rumored to play a role in the decision.

Heresay but hats off to a young man who had to make a difficult decision in his life and leave the game of hockey. 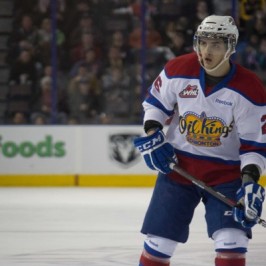 Career Synopsis: The second of two unfortunate circumstances was the death of Pelss. Pelss’ body was found in June 2013 and ruled an accidental death when it was found off the Stone Bridge in Riga, Latvia.

Pelss was originally scouted by the WHL Edmonton Oil Kings and was projected to be a possible NHL energy forward. He played for Latvia at the 2012 WJC and signed a 3-year ELC with the Oilers in May 2012.

Pelss played one season in the AHL scoring 8 points in 20 games. He also played 13 games in the ECHL scoring 5 points that same year. He was expected to take another step to being an AHL regular in 2013-14 before his untimely death.

The Oil Kings also won a Memorial Cup and dedicated the win to his memory.

Other Options: Not applicable

Career Synopsis: Jones was a decent scoring forward in the BCHL in his draft year before going the NCAA route. He posted strong numbers in the NCAA (127 points in 158 games) and joined the OKC Barons at the end of the 2013-14 season.

He played 48 games for the Barons in 2014-15 scoring 14 points. He also scored 25 points in 27 games in the ECHL. That wasn’t enough for the Oilers to extend a qualifying offer and got an AHL tryout with the Bridgeport Sound Tigers.