The end of the 2014-15 season seemed to mark a turning point for the Colorado Avalanche.

The team was coming off a disappointing regression in 2015, and as we saw in the third part of the Odyssey of Idiocy, there were plenty of reasons for this, bad drafting being chief among them. The 2015 draft seemed to be a welcome change.

It’s too early to say for certain what the ultimate fate of the 2015 draft class will be in Denver, but early signs are promising. Most impressively, the Avs seem to have chosen some solid picks in the later rounds. 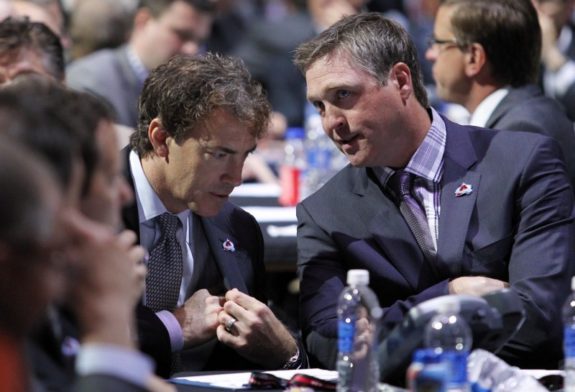 But before the Avs even made a selection in Sunrise, they made the biggest splash of the draft with a trade that has tilted against them in the years since.

The Avs were backed into a corner with the Ryan O’Reilly trade. Their relationship with the player had deteriorated steadily and publically over the past two or three seasons, and it seemed a matter of when, not if, he would be traded.

O’Reilly’s salary demands were ludicrous and would have handcuffed the team when the time came to re-sign players like Nathan MacKinnon. On the other hand, Buffalo had no issues meeting that demand and they knew they would have Jack Eichel’s mega contract, among others, to worry about.

O’Reilly would’ve led the Avs in scoring last year and the year before. The fact remains, of the five forwards who made up the bulk of the team’s potent attack in the successful 2013-14 season, two are gone and the remaining three have yet to look the same. 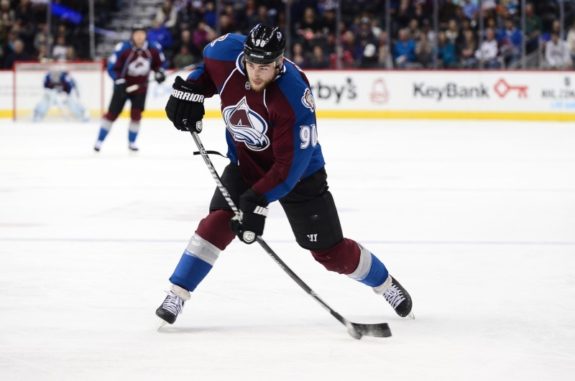 Ryan O’Reilly ‘s departure left a hole in the Avs’ offense that has yet to be filled. (Photo: Ron Chenoy-USA TODAY Sports)

At the time, however, the Avs seemed to have done well in the trade. They got major cap relief, depth up front, an up-and-coming defender the likes of which they’d been chasing since Rob Blake left, a strong young forward prospect, and a decent draft pick.

A more in-depth examination of the trade by THW’s Kevin Goff breaks down the individual pieces, but the trade has slowly tilted in the Sabres’ favor. Mikhail Grigorenko left the Avs for Russia just when it seemed his offensive production was starting to climb. He hit double-digits in goals for the first time in his NHL career and flashed some skill, but could never put it all together.

Nikita Zadorov may never be an offensive dynamo, but he somehow put up passable possession numbers on an atrocious team last year and established himself as a fearsome physical force.

As of this writing, however, Zadorov remains unsigned. Many are confident he will sign, but losing him would be a crippling blow to an already-undermanned Avs defense. It would also make the trade a total fleece job by Buffalo. 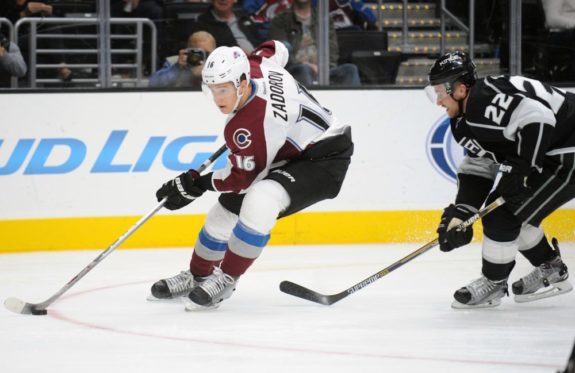 The other assets the Avs acquired in the deal have yet to definitively pan out, but JT Compher and the pick the Avs acquired (which, after some shuffling, became AJ Greer) both look like future contributors. Both have decent size and high compete levels to go with their offensive skills.

But, as the adage goes, whoever gets the best player wins the trade, and there’s no doubt which party that was. O’Reilly has been exactly what the Sabres expected him to be and has put up the kind of offense he was supposed to. The Avs miss him up front.

As outlined in Part 1 of the Odyssey of Idiocy (trademark pending) the Avs have been seeking a number one defenseman for a long time. As they did with Erik Johnson in 2010, the team traded a big part of their future up front in search of that defenseman and earned a questionable return.

Rick Pracey’s disastrous tenure as the Avs’ scouting director came to an abrupt and unceremonious end in October of 2014, and the Avs came into the 2015 draft with a clean slate. Early signs pointed to them making the most of it.

Of course, two years is not enough time to adequately evaluate a draft, but consider that Mikko Rantanen’s 20 goals last year is more than the 2010, 2012 and 2014 draft classes combined. After this season, he’ll have played more games in an Avs uniform than all those players combined too.

That’s an indictment of the organization’s bad drafting in those years, especially 2012, which we picked apart in Part 2 of the Odyssey of Idiocy, but it’s also a sign of improvement. A more telling sign of improvement is the development of the later picks. We touched on AJ Greer above. Scouts differed on his potential, but the Avs saw something there, and his first pro season, which included his first NHL point, showed promise.

I'm really looking forward to seeing what Jost, Meloche, Greer and AJ Greer can do in this next season. Big years for all of them.

The other player mentioned in the above tweet, Nicolas Meloche, looks like a shrewd choice as well. A devastating hitter, known as the nastiest body-checker in his draft year, he also has underrated offensive flair. His 16 goals and 47 points in 61 games in the QMJHL attest to that. His first pro season is upcoming and will tell us more.

There are never otherworldly expectations on a third round pick, but the Avs have to be pleased with J.C. Beaudin, who put up back-to-back 30 goal, 80 point seasons in the Q. As with Meloche, his first pro season will be telling.

As for the two Russian defensemen the Avs took, sixth-round pick Sergei Boikov may be a solid AHLer his entire career and nothing more, but fourth-rounder Andrei Mironov is expected to compete for a spot on the Avs’ back end this season. Either way, the two players already represent stronger picks than certain second or even first rounders the Avs chose in Pracey’s tenure.

It will be years before we know the full effect of the 2015 draft but as of now, it marks a turning point. Rantanen alone represents a marked improvement.

After the O’Reilly trade, the Avs made very few swaps of consequence and none of those trades worked out for them, but none left the team in a massive hole either. Each one set the team back just a little bit and has left Joe Sakic’s trade record spotty.

In February of 2016, it became clear the Avs were looking to make a push for the playoffs. It even seemed like they might get in. They pulled off a series of trades, but tripped and faceplanted down the stretch, losing that playoff spot once again.

The third rounder the Avs traded for Eric Gelinas was a waste of a pick, though nobody knew that at the time. Gelinas put up 29 points in his rookie season with New Jersey but declined steadily after that. He played just 33 games for the Avs amidst injuries and healthy scratches, put up only one point and is no longer in the organization. 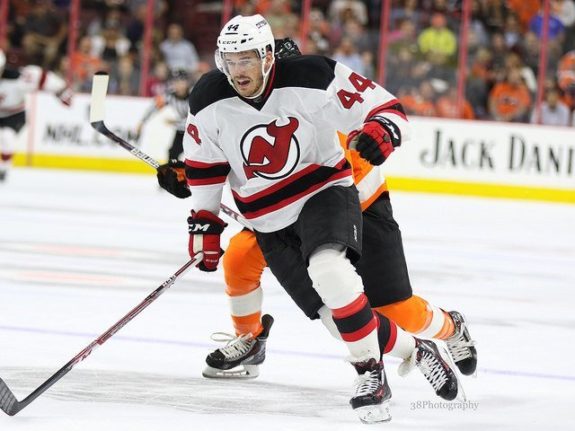 The Avs would have been better off keeping the third round pick they traded for Eric Gelinas. (Photo: Amy Irvin / The Hockey Writers)

The Avs shipped off prospect Colin Smith and a fourth round pick to the Toronto Maple Leafs for Shawn Matthias, who played well in Colorado posting 11 points in 20 games, but couldn’t propel his new squad into the playoffs. He departed for the Winnipeg Jets in July of 2016.

The team gave up a number of assets for Mikkel Boedker in a trade that’s ultimately headed in the Arizona Coyotes’ favor. Boedker is now with the San Jose Sharks after being a consistent offensive threat in his brief time with the Avs, while Alex Tanguay and Conner Bleackley have moved on from Arizona to retirement and St. Louis respectively.

Kyle Wood, however, is likely to end up being the most valuable asset exchanged in the deal. The 6’5 right-shooting defenseman posted 43 points in 68 games in his rookie AHL campaign and looks like he could be the type of defenseman the Avs thought they were trading for in Gelinas.

A few minor trades since then and some asset selling during last year’s abysmal second half don’t really bear mentioning. The Avs got a poor return for Nick Holden, given what he’s done for the Rangers, but a good return for Andreas Martinsen considering what Sven Andrighetto has done for them so far.

If it’s too early to truly evaluate the 2015 draft then it’s laughably early to be judging 2016 and 2017, but in the interest of giving the Avs their due credit, after dumping on them for four full articles, the job they did in these two years needs to be mentioned.

Tyson Jost was largely considered a great pick at the time, and his excellent freshman campaign at UND along with his performance for Canada at the WJC did nothing to dispel that. He made his NHL debut last year and could play top six minutes in 2017-18. 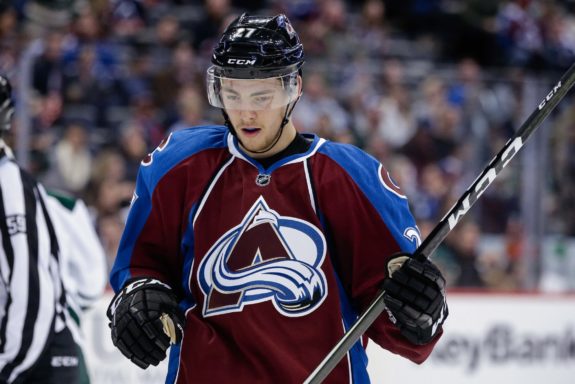 Tyson Jost made his NHL debut last year. Compared to Jonathan Toews in his draft year, he represents the future of the Avs up front. (Isaiah J. Downing-USA TODAY Sports)

Cameron Morrisson doesn’t get talked about much, but the second round pick in 2016 had a quietly successful freshman year at Notre Dame with 24 points in 40 games in a stacked Hockey East conference. He has three more years to build on that success. The rest of 2016 is still too far back in their development for any real evaluation.

Early signs from the 2017 draft, meanwhile, indicate the Avs hit this one out of the park. Cale Makar is a lock for Team Canada’s blue line this Christmas and Connor Timmins may be there as well. The Canadian World Junior entry could have a distinct Avs flair on their back end. 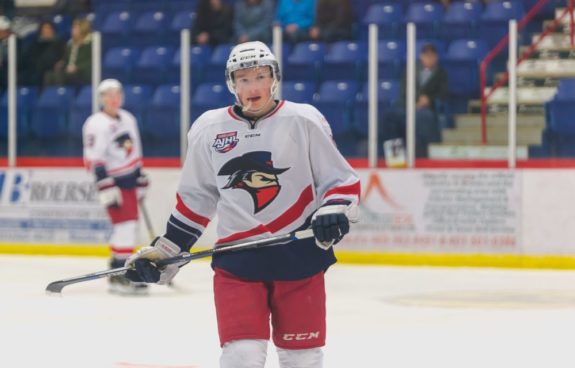 And this is a long shot, but given the offense he supplied last year, don’t be shocked if Nick Henry gets a long look from team Canada brass as well. He had 81 points in the WHL last year, and his Regina Pats promise to be strong once again as they host the Memorial Cup.

So maybe this is a sign the Avs are turning a corner. Maybe this points to an organization that has learned from its failures and is getting better at drafting and developing its young talent.

But this organization, in particular, has fooled us recently. They’ve seemed to be back on track twice before, and are now rebuilding for the third time. Avs fans would be forgiven for having an “I’ll believe it when I see it” attitude.

The Odyssey of Idiocy may be over. Only the next few years will tell us for certain. But monumentally bad decision making brought the Avalanche here, and it will take years of clever planning to undo it. Here’s to you, Mr. Sakic. Goodness knows you’ve got your work cut out for you.