Defense has been the Toronto Maple Leafs’ number one problem this season. Either it’s the forwards struggling to get out of their own end or it’s the defensemen forgetting their assignments in front of the net. There is also the constant blunders from the defense. Martin Marincin struggles with making breakout passes and clearing the puck, while Matt Hunwick always seems to be on the ice when the Leafs are scored on.

Their defense is something the Leafs will continue to address in the next few drafts, but right now there are two defensemen who look to improve the future on the blue line: Andrew Nielsen and Travis Dermott.

Nielsen has been the biggest surprise for the Leafs. He was a surprise pick in the third round of the 2015 NHL draft. At the time, it looked like the Leafs picked Nielsen a few rounds too early considering he had just 24 points in 59 games with the Lethbridge Hurricanes in the Western Hockey League.

Last year, the doubts about Nielsen were quickly silenced after going back to the WHL and putting up 70 points in 71 games. Now his challenge is in the American Hockey League with the Toronto Marlies. Nielsen unsurprisingly made the Marlies out of camp, but he wasn’t expected to make a major impact so soon with his new team.

Nielsen leads the Marlies defense in points with nine in 12 games and is third in team scoring. Seven of those nine points came on the power play with two goals and five assists. He has quickly proven himself to be a cornerstone of the Marlies power play, which is something the Leafs sorely need as well.

At 6’3″ and 220 pounds, the Marlies have a defenseman who likes to use his size and has learned how to stay out of the penalty box. Nielsen also has tremendous offensive skill and so should have no trouble fitting into any future role on the Leafs’ blue line. 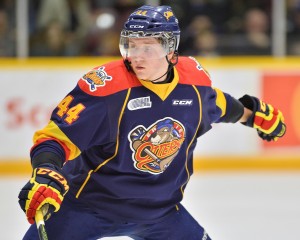 The Leafs had a very successful draft in part due to taking Travis Dermott in the second round in 2015. (Photo by Terry Wilson / OHL Images.)

Dermott is the next defenseman in the organization who will likely be making the jump to the NHL in a few years. Dermott has shown a reliable consistency to his game while also being a mobile puck-moving defenseman.

Dermott hasn’t put up the numbers that Nielsen has, but he was consistent during his time in the Ontario Hockey League. As a rookie in the OHL, Nielsen put up 28 points in 67 games, then 45 points in 61 games and 43 points in 51 games during his last year in junior.

Just as Nielsen stepped up to become an important part of the Marlies defense, so too has Dermott. In eight games Dermott has recorded five points with two assists on the powerplay and is third in scoring for Marlies defensemen.

The only problem for the Leafs, and these two players, is that the Leafs have an overabundance of left-handed defensemen. It will be difficult to fit both Nielsen and Dermott into the Leafs’ future lineup.

Coach Mike Babcock generally likes to have defensemen play on the same side as they shoot. So there won’t be many spots left since Morgan Rielly and Jake Gardiner are expected to be the left defensemen on the first two pairings for years to come.

Regardless, expect to see at least one of these two defensemen in the NHL in the next few years.