Following the success of last season the New York Rangers will likely be looking to match or surpass their appearance in the Stanley Cup Finals and the measure of a successful season could be determined as “Cup or bust.” Recently moving into second place in the Metropolitan Division despite missing their unequivocal best player in Henrik Lundqvist, the Rangers are most definitely a cup contender and here are a list of the five weaknesses or potential obstacles that the team must overcome if they want to match last year’s results.

No one will mistake the Rangers for a team that wins with physicality, they beat teams with speed and goaltending. However in the playoffs and down the stretch of the postseason race it will be very important to have at least a solid physical presence. Players like Chris Kreider, Kevin Klein and even the undersized Mats Zuccarello are willing to get scrappy in the corners and each have dropped the gloves this year but the major player that is supposed to set the tone is Tanner Glass and all things considered he has dropped the ball. In some of this years more physical games, including all four Islanders games he has not only not fought but not had much presence at all in the game. Combine that with a -15 rating and Glass needs to demonstrate his value in a greater fashion or a less tough lineup with Fast, Miller and Stempniak will make more sense and others will have to combine to be the enforcer. 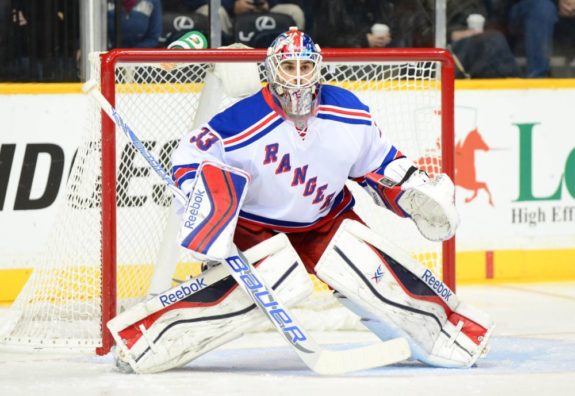 Let me start by saying this clearly: Cam Talbot has served admirably in the wake of Lundqvist’s first major injury. However, the Rangers have lived and died by King Henrik for the past decade so when he is not in net it is noticeable and noteworthy. From the small sample size this season and the slightly larger sample size from his career, Talbot is a starter quality goaltender and probably could be a night in and night out starter for several teams in the NHL right now. It seems the worst case scenario for Lundqvist’s injury is being out the rest of the regular season. If that is the case as of now it seems that Talbot will be able to lead the Rangers to the dance and the hope is that then the King can step in and do what he did last year and lead the blueshirts to the finals or further.

Throughout this season, and early last season, the Rangers have consistently played up and down to various competition. The spark that propelled last years playoff run was learning to bring their “A” game each and every night and playing a full 60 minutes. Games like the high-scoring 6-5 win over the Islanders earlier this week are a perfect example of that type of play but the overtime win against the struggling Stars last week are the type of efforts that will not cut it as the spring and high stakes games approach.

Xs and Os: Faceoffs and Clearing the Zone

The two major strategic shortcomings for this team are in the faceoff circle and the defensive zone. The Rangers are the second worst in the league in faceoff percentage with Dominic Moore being the only center winning more than half of his draws. Brassard sits at 49% while Stepan and Hayes sit at an unacceptable 42% and 36% respectively. Hayes has limited center experience before this year so that makes more sense than Stepan. Nonetheless a solution must be found whether it be internal with a guy like Miller taking Hayes position or externally, Antoine Vermette anybody?

Clearing the zone is one of those aspects of the game that often goes unnoticed but is immensely important. Though there are not many statistics to back it up, anyone who has watched this team play has seen numerous failed clearing attempts lead to goals against. This is a problem that can be fixed with additional identification and focus on the problem. When the Rangers play a 7-game series it will be important to not make mistakes that help already skilled teams put pucks in the net.

4 thoughts on “The Rangers’ Biggest Obstacles”