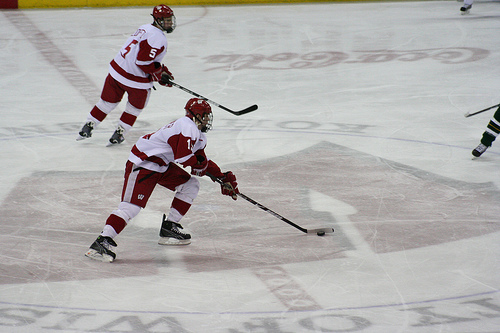 You know how those puck moving defenseman are very useful to a team? They move the puck in and out of the zone with ease and setup numerous scoring chances for your team. Sometimes you think; “Boy how horrible would this team look without THIS guy?’

“THIS” guy for the Toronto Maple Leafs could very well be 21-year old defenseman Jake Gardiner. Brian Burke, general manager of the Leafs drafted Gardiner when he was with Anaheim in the first round of the 2008 NHL entry draft. Last year with the Maple Leafs, he dealt defenseman Francois  Beauchemin to acquire the talents of the speedy Gardiner.

At the time, Gardiner was described as a “terrific” prospect by many scouts and has since, done nothing to lose that prestige if not add to the value.

The native of Minnesota spent his college career with the Wisconsin Badgers posting a solid 41 points in 41 games in his last year playing in the WCHA. Out of those 41 points, 31 were assists. He made the transition over to the AHL towards the end of last season after the Badgers were eliminated from the playoffs.

With the Toronto Marlies, he played in just 10 games and recorded three assists.

You probably won’t find a more talented and smoother skater outside the NHL than Jake Gardiner. His skating is the bread and butter of his game as he uses his quick feet to stride past the opposition and control the puck in and out of the three zones. His skating alone could secure him a job in the NHL. In saying that, you cannot classify him as a puck hog because he likes to play a passive game and is very careful when making decisions to pinch up in the offensive zone. He can see the ice better than most players.

Jake is an offensive defenseman, he can get into trouble sometimes when pinching up in the zone. Jake has trouble reading the play in the defensive zone and does not yield that great of an NHL shot which can tailor the defense to leave him open on the point. The biggest worry in Gardiner’s game is whether or not he can withstand the physical force and strength of NHL players, but that comes with most college players. There are doubts whether or not he can transition his success from the WCHA to the NHL.

With the talent of a player like Jake Gardiner on your team, its hard to keep him off the power play. He can round into a top four defenseman in the NHL and quarterback the second power play unit. When the top players on a team have to be pushed back for whatever reason, Gardiner would be a 1st/2nd candidate to move up on the depth chart.

Next year with the Maple Leafs organization, it is likely that Gardiner will start the season in the AHL playing for the Toronto Marlies and take the now infamous “Keith Aulie” route to the NHL. That means he will be called up when someone gets injured or a struggling player is being forced to be taken out of the lineup.

Keep in mind, the Maple Leafs said it themselves that they rushed Keith Aulie’s developement last year.

Comparable: Bret Hedican, when he was with the St. Cloud State of the WCHA

Other Articles Around the Net:

McKenzie: Newly Acquired Leaf Gardiner Has Work To Do

Who is Jake Gardiner?

You can watch Jake Gardiner talking at the Toronto Maple Leafs prospects camp from their video centre:

Jake Gardiner Talks After Day One of Prospect Camp

You can watch Brian Burke offer his thoughts on the trade acquiring Jake Gardiner at the NHL Video centre:

Jake Gardiner has spent most of his life playing the forward position. Ever since he was a child, he liked to play at forward but changed his position early on in high school to defense.