With word coming early this morning that Jarome Iginla was headed east from Calgary to Pittsburgh, the New York Rangers are clearly at the crossroads of their season. The trade deadline is a week away, the team is facing a difficult test over the next six games, and now one of the most respected and productive power forwards of this era will be joining the top team in the conference. It’s enough to make any Ranger fan pass on breakfast, but all hope is not lost, at least not yet. There are two names that can help counter this latest of Pittsburgh coups, one familiar to New Yorkers, the other maybe not so much; Jaromir Jagr and Ryane Clowe.

First, let’s take a look at the ever-evolving State of the Rangers. They finally broke out of a miserable scoring drought with a 5-2 win in Philadelphia Tuesday night. Head coach John Tortorella’s drastic line changes seemed to breathe life into the team and relieve some of the pressure suffocating certain underachieving vets. Derek Stepan was promoted to the top line between Rick Nash and Carl Hagelin, and the trio dominated the game. Meanwhile, Brad Richards and Marian Gaborik slipped in the pecking order, with Richards responding with one of his best efforts in recent weeks. The addition of Chris Kreider and the impending return of Mats Zuccarello add speed and jump to a lineup that had been plodding along most of the season, but are the moves just quick fixes masking fatal flaws in the team’s construction? That’s what Glen Sather and the organization have to ask themselves, and they will have to formulate an answer quickly with April 3rd fast approaching.

Which brings us back to Jagr and Clowe. First, the familiar number 68. Yes, there are rumblings out of Dallas about a possible contract extension and mutual affection between player and city. But with the Stars recent deal of popular captain Brendan Morrow (to Pittsburgh of all places),  there is a possibility anyone on their roster can be had for the right price. How much would Jagr cost? Morrow cost the Pens a highly touted prospect and a fifth round pick, so the asking price for Jagr could be similar. Jagr could step into a comfortable situation in New York where he will not be asked to carry the team as he did during his first stint on Broadway, nor will he have to carry the unwanted burden of the team captaincy. Putting number 68 on the second line and second power play unit takes enormous pressure off the struggling Gaborik and adds another scoring threat to a team desperately seeking goals. The added bonus is that Jagr has become more of a leader in his twilight years, a positive influence in a locker room that could use a veteran presence to buffer between the younger Rangers and their acerbic coach. 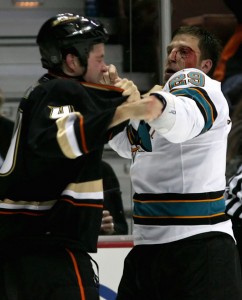 Clowe is a different story altogether, someone who will address the teams other glaring weakness: toughness. Clowe is a 6’2 225 pound winger who can play and is not afraid to drop the gloves to stand up for his teammates. While he has yet to score a goal this season, Clowe has had seasons of 24, 22, 17 and 16, so there is talent there, and his 77 penalty minutes in 26 games show he is the physical presence and aggressive agitator this team has not had since Brandon Prust’s departure.  A deal  with the Sharks would be a radically different approach from a deal for Jagr, but one that can certainly be equally as important if not more so.

So the questions abound. Will Sather make a move to counter the Pens all out run at the Cup, or does he believe his roster is complete and just starting to jell? Does he go after the gunner in Jagr, or the brawn in Clowe? The answers to these questions hold the fate of the 2013 Rangers, and one thing is for sure; the Penguins have been decisive, so New York will have to be as well, one way or the other.

Billy Pepitone is a retired New York City Police Officer turned author and hockey writer. He has published two sports novels, most recently the murder/mystery ‘Ice Cold’ which revolves around the New York Rangers. A Ranger fan for over 35 years, Billy has covered the Blueshirts for NYRangers101.com and ‘The Instigators’ blog talk radio show.