As we make our way through a semi-eventful off-season, you can finally see the light at the end of the tunnel. As the calendar turns to August, there are roughly 70 days until the University of North Dakota kicks off the 2015-16 season.

If you haven’t been paying attention during the off-season, there have been a few changes. Former UND head coach Dave Hakstol is now the head coach of the Philadelphia Flyers. 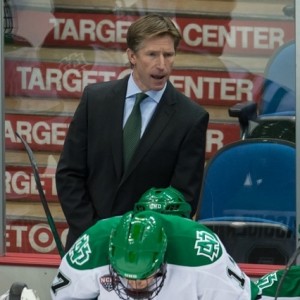 With the change at the top, UND enters the 2015-16 campaign with a new head coach. Assistant coach Brad Berry was promoted after Hakstol’s departure. Newly hired assistant coach, Matt Shaw joins the UND coaching staff for the 2015-16 season.

As always, expectations are high for UND. The Green and White enter the 2015-16 season as the defending regular season National Collegiate Hockey Conference champions. UND also looks to make a return trip to the Frozen Four.

Let’s take a look at UND’s 2015-16 schedule. Here’re five must-see matchups that should catch your attention.

Over the past three seasons, UND has a 3-4-3 record against Hockey East teams. UND looks to improve on that record when they head to Burlington, VT, to play the Catamounts. All-time, UND is (3-0-1, .875) against the Catamounts and has never played in Gutterson Fieldhouse.

For those keeping track, former UND defenseman Dan Senkbeil (2010-12) is a member of the Catamounts.

The Wisconsin Badgers return to the Ralph Engelstad Arena for the first time since the 2012-13 season. Since college hockey’s re-alignment, UW and UND have played three times with UND winning all three games by a combined score of 14-6.

Looking back at the UND vs. UW rivalry, the water bottle incident comes to mind. Even after 33 years, many UND fans still talk about this historic game. 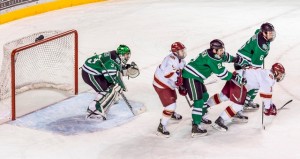 This season, UND’s non-conference schedule includes an unfamiliar foe. UND and UAH haven’t played each other in 26 seasons. The last time the two teams met, George H. W. Bush was the president of the United States. None of the players on either roster was alive the last time UND and UAH played.  All-time, UND is 2-0-0 against the Chargers.

Looking at the UND hockey schedule, which matchup are you looking forward to?