If you were to ask a hockey fan from Russia who the greatest Russian/Soviet player ever was, the answer, without hesitation, would be Valeri Kharlamov. In Russia, Kharlamov enjoys legendary status among hockey fans. His legend is so great that some question whether he was as talented as Wayne Gretzky or Mario Lemieux. He is the idol of almost every young Russian hockey player. Ilya Kovalchuk wore Valeri Kharlamov’s #17 in the NHL, and Evgeni Malkin wears the reverse, #71. No Russian player wears Kharlamov’s #17 in international games (other than the World Juniors), and for awhile, nobody did in the Russian domestic league.

And he’s the most overrated player ever.

The Case for Valeri Kharlamov 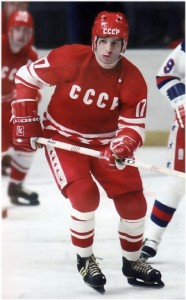 Playing left wing on the famed Kharlamov-Petrov-Mikhailov line, Kharlamov was known as a dynamic offensive talent. Standing at just 5’8″, 165 lbs., he was far from an intimidating physical presence on the ice. However, Kharlamov made his mark with his brilliant speed and ability to handle the puck at full speed. He was a tremendous offensive talent capable of scoring himself, and setting up his teammates. He played a very “beautiful” and “pure” style of hockey (remember that for later).

In his playing career, he collected a treasure trove of medals and awards. Between the Olympics and World Championships, he won a total of 10 gold medals, 3 silver medals, and 1 bronze medal. He won a Soviet MVP award, and was second place three more times.

One of Valeri Kharlamov’s greatest traits was that he seemed to always play his best in big games. In the 1972 Summit Series, he was dominant until Bobby Clarke’s vicious slash crippled his ankle. He led the 1972 Olympics in points with 16, five more than the next best player.

The only viewings that North American fans saw live of Valeri Kharlamov were the 1972 and 1974 Summit Series, 1976 Summit Series, the Olympics, and one game of the 1979 Challenge Cup. However, the image that always sticks in everyone’s mind is the 1972 Summit Series.

That resume certainly doesn’t sound like the most overrated player ever. But, to properly put in context the quality of a player, you have to see how dominant he was compared to his peers.

The Case Against Kharlamov

In recent years, more complete records for Soviet league scoring, World Championship scoring and awards voting, and Soviet MVP voting have emerged, allowing hockey historians to more accurately judge these players. Below are tables that compare Valeri Kharlamov with the four most famous Soviet forwards of all time, other than Kharlamov. The first table is their exploits in the Russian league, and the second is their exploits internationally. Petrov and Mikhailov were Kharlamov’s long-time linemates, Alexander Maltsev was a center/right wing that played during the same time period as Kharlamov, and Sergei Makarov was a Soviet right winger in the 1980s. Click their names for a short biography of each of them.

For an explanation of Vs2, see this article. If you don’t want to understand the system, just know that the higher the number, the more dominant the player was offensively compared to his peers. Across the board, it jumps out that Sergei Makarov is clearly superior in every category, other than second team all-stars, which they did not award during his career.

In terms of top 10 finishes in Soviet scoring, Valeri Kharlamov’s finishes are the worst. They appear to be better than Maltsev’s by a hair, but when you consider Kharlamov played on the best team in the league, CSKA (who was essentially the Soviet national team), and that Maltsev played for Dynamo with significantly worse teammates, it’s clear that Maltsev’s finishes are more impressive. 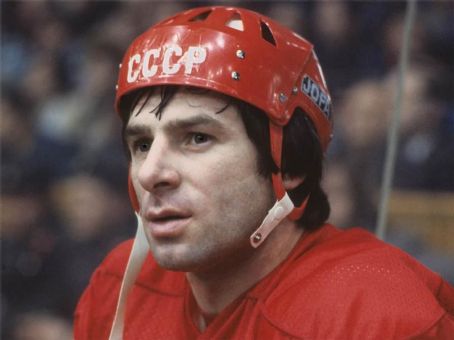 In MVP finishes and AS team finishes, Makarov clearly wins. Then, Mikhailov, Maltsev, and Kharlamov are almost identical in both categories. All three got MVP consideration for 8 years, and their average finishes are 3, 3, and 3.125, respectively. They are identical in AS team finishes. Petrov is clearly last.

Vs2 demonstrates the same thing as top 10 finishes, but in a different manner. Similar to top 10s, Makarov and Petrov are a clear #2, and then there is a dropoff to the other three, with Kharlamov clearly in last.

For a player with the legendary status of Valeri Kharlamov, you would certainly expect better results. After all, these are 10+ season sample sizes and are a very good indicator of the quality of a player. Yet, he comes out as the worst of them all. One historical caveat to note is that assist recording in Russia during these years was spotty, and some have claimed that it hurt Kharlamov’s point totals.

This is only partly valid. Valeri Kharlamov’s goals as a percentage of his total points is lower than Maltsev and Mikhailov, meaning his point totals would likely improve with better assist records compared to them. But, Petrov’s goals as a percentage of points was much lower than Kharlamov’s, meaning his totals are likely even more underrated than Kharlamov’s (despite already being significantly higher!) By the time Makarov was playing, the assist recording had gotten better.

Valeri Kharlamov’s one strength in the above table is his finishes in MVP voting. However, the Soviet MVP voting is not the same thing as winning a Hart Trophy in the NHL. When voting, the voters took into account international play in addition to play in the domestic league. That is why there are clear incongruencies between domestic scoring and MVP voting (see Petrov and Kharlamov’s scoring finishes and MVP votes for two opposite examples). In many cases, a big display in one international tournament trumped whatever happened in the domestic league because it was perceived as more important.

This table compares the exploits of these players internationally:

In terms of recognition for their World Championship exploits, Makarov dominates in AS team selections, and Maltsev has more Best Forward selections than everyone else combined.

When looking at the PPG columns, you should really only consider the top four; comparing Makarov to these four is not fair because scoring was lower overall when he played in the World Championships due to a more even playing field. The 8 AS team selections shows how dominant he was compared to his peers. 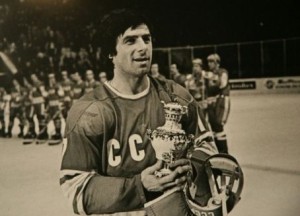 In terms of the World Championships and Summit Series, the members of the Kharlamov-Petrov-Mikhailov line are essentially even, with Mikhailov being slightly ahead.

Valeri Kharlamov’s one shining, gold star in all of these comparisons is his performance in the Olympics, where he shines far above the other four. This falls in line with the notion that Kharlamov played his best in big games.

However, if Kharlamov’s one advantage is over an 18 game sample size, is it really that much of an advantage at all? Sure, it’s a nice feather in his cap, but I would lend much more credence to a sample size of 10+ seasons in the Soviet domestic league, or over 100 games at the World Championships.

Yes, Kharlamov stepped his game up in the Olympics, and that should be commended. But when that’s the only thing people remember about him, it’s a problem. Looking at all of the above metrics to judge players is what needs to be done. And when you do that, can you definitively say that Valeri Kharlamov is a better player than any of the other four? I don’t think so, despite the fact that he is almost universally regarded as so.

This study also is looking strictly at offense. It does not get into any intangibles any of the players might have. Consider that Mikhailov was a tremendous leader and a very physical player, and Petrov was a physical player in his own right, and a respected two-way player.

So Why is Kharlamov So Revered?

Now that we’ve established that Valeri Kharlamov is not the clear cut best Soviet player ever, we need to understand why everyone believes he is. All of the below play a part in the false perception:

Don’t get me wrong, Valeri Kharlamov was a tremendous player. He’s a top ten all-time Russian hockey player, but is not the best. Vladislav Tretiak, Sergei Makarov, and Alexander Ovechkin have proven to be clearly superior, and he is very close to Maltsev, Petrov, and Mikhailov. He’s close to Valeri Vasiliev and Anatoli Firsov as well.  To put Valeri Kharlamov in the same conversation as Wayne Gretzky or Mario Lemieux is lunacy. Until the perception of Kharlamov changes (if it ever does), he will remain the most overrated player in hockey history.

9 thoughts on “Valeri Kharlamov: The Most Overrated Player in History”