If you’ve ever had the pleasure of attending an NHL game, you know that it’s an experience like no other.  The speed and physicality of the game is one thing on TV, but in person it’s on an entirely different level.  Just as you are enjoying the game in person, there are 19,000 other fans who pay an ever-increasing amount to watch the game in person. 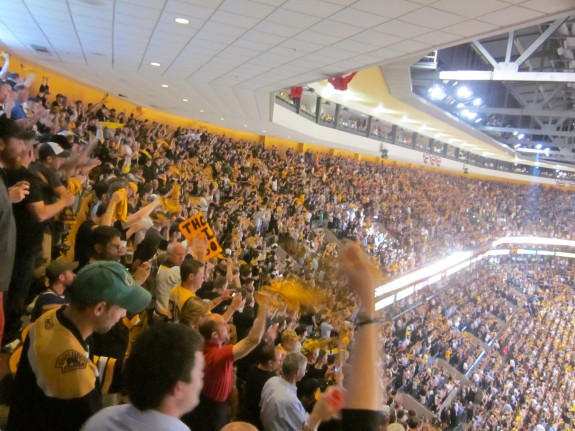 Within NHL arenas, there is an unspoken fan etiquette among attendees.  There are subtle differences in each city, but in general, the etiquette is the same.  Some of the rules are common sense and common courtesy, and others are more subtle.  To ensure that you enjoy the game and do not interfere with the enjoyment of the game for others, here are some rules of thumb to follow that will make you look like you’re a seasoned veteran:

I recall getting a puck from Mark Recchi when I was young, and I brought it in to show and tell at school, proudly displaying it.  It made my week.  As an adult, if I got one I would toss it on top of my dresser when I got home, and forget about it.  Do not be like these people:

Over at Puck Daddy, there is a re-occurring column of people that commit “Jersey Fouls” that violate the unwritten code.  Committing a jersey foul indicates you aren’t a seasoned veteran.

In today’s day and age, people are attached to their cell phones.  They are fine to use during a game, but in moderation.

While the Game is Going On

Within each arena, there are other unwritten rules and traditions that apply to one fan base.  But if you follow these 20 basic rules of thumb, your hockey fan etiquette will be better than most.

5 thoughts on “Video: 20 Unwritten Rules You Should Follow When Attending an NHL Game”