“Rebuild” has become somewhat of a buzzword around hockey circles these days. What was once synonymous with last-place finishes, perennial losses and considered unthinkable for big-market teams has turned into a necessity for long-term success in the NHL cap era. Teams such as the Toronto Maple Leafs, New York Rangers and Detroit Red Wings long reined over the NHL thanks to their ability to use draft picks as currency and attract big-name free agents with the promise of riches and championship contention.

However, since the 2005 lockout, ponying up huge dollars for free agents is a recipe for disaster, as salary cap space has become one of the most valuable assets in hockey. To create sustained success, teams have realized that drafting and developing young talent is the best way to combine results on the ice with their ability to keep homegrown players in the fold when the time comes to re-sign their top talent.

Several teams hoping to skip this process have broken down without earning a real chance at contention, which is the unfortunate result of attempting to take a shortcut around the inevitable rebuild. The Leafs floundered in no man’s land for the better part of the last decade, hovering out of the playoffs but too good to earn a top draft pick.

After fully committing to a tear-down two summers ago, the Maple Leafs’ rebuild, or “build”, as assistant GM Kyle Dubas coined it, they are now among the league’s top up-and-coming teams. The Buffalo Sabres, Winnipeg Jets, and Arizona Coyotes are among the other teams that are beginning to see the fruits of a full rebuild.

The formula for building for the future seems simple, but much can go awry over the course of a prolonged rebuilding process. Perhaps most infamously, the Edmonton Oilers struggled in the standings for years, collecting top draft selections and young players, but haven’t cracked the playoffs since advancing to the Stanley Cup Finals in 2006. It’s not exactly clear what causes rebuilds to falter, but it can vary greatly from team to team.

It seems a bit late to label the Oilers’ rebuild a failure, as they were able to land Connor McDavid in the draft lottery in the summer of 2015 and look poised to contend for a long time with one of the best young players the league has ever seen leading the charge. However, it wasn’t too long ago that the Oilers were the NHL’s poster child for poor management and the dreaded “tanker”.

Beginning in the 2010 season, the Oilers began a historical run of futility, earning the first overall pick in three consecutive drafts. With Taylor Hall, Ryan Nugent-Hopkins, and Nail Yakupov in tow, the Oilers were a trendy pick to become the league’s next “super team”. After all, with three offensive superstars leading the way, how could the Oilers possibly fail to become a contending team?

We all know the outcome of the Oilers’ former regime; GM Steve Tambellini cycled through a revolving door of head coaches, with Dallas Eakins, Ralph Kreuger, Tom Renney and others all spending at least one season behind the Oilers’ bench, with limited degrees of success. His inability to draft NHL players outside of the first round of the draft ultimately crippled the organization, as only two players drafted by the Oilers after 2010 have played more than 25 games.

Suggestions were made to try and explain the Oilers’ inability to improve as a team. The instability in the front office and behind the bench contributed to the stagnated development of their young players. Nail Yakupov experienced a fairly successful rookie season with Kreuger behind the bench, leading all rookies in goals and finishing as a finalist for the Calder Trophy. However, despite seeing positive growth as a team, Kreuger was fired and replaced with Eakins, which led to consecutive last-place finishes and, ultimately, cost Tambellini his job after the 2014-15 season.

The Oilers appear to be on track now, as new management combo Peter Chiarelli and Todd McLellan both bring a long track record of playoff success and experience to the Oilers. McDavid is leading the NHL in scoring and could become the first teenager to win the Hart Trophy since Sidney Crosby. While it appears the Oilers are finally building a contending team from the ground up, there are still several holes to fill before they can truly claim their rebuild is over.

Through all the negativity about floundering teams, there is a light at the end of the tunnel via the entry draft. Few teams get the luxury of insulating a talented rookie with a veteran-laden lineup and a successful atmosphere, and several seasons of poor finishes and playoff-less hockey are a necessary part of the rebuilding process. 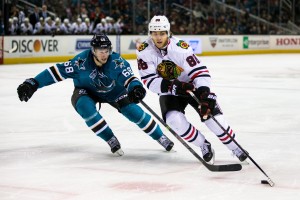 Drafting remains the easiest way to restock a team’s prospect cupboard, giving them the full luxury of replacing veterans who price themselves out of town with a young player on an entry-level contract. The Chicago Blackhawks have remained a model franchise since their first Stanley Cup championship in 2010 by consistently finding contributing NHL players in the later rounds of the draft.

Despite losing a ton of talent in that time, including names like Andrew Ladd, Dustin Byfuglien, Michael Frolik, Nick Leddy and Brandon Saad, the Blackhawks have been able to insert talented young players to supplement their elite core of Jonathan Toews, Patrick Kane and Duncan Keith.

Of course, this all ties back into good management. For years, the Blackhawks consistently finished near the bottom of the league, dipping to 29th in average attendance in both 2006 and 2007. Dale Tallon started the Blackhawks’ strong draft track record, and while he was replaced before winning their first Stanley Cup, Stan Bowman has continued Chicago’s success and led them to two more titles without having to rebuild his roster.

What Does the Future Hold?

When looking back at previous iterations of the rebuild, it’s difficult to predict how well the Maple Leafs, Coyotes, and Jets will be in five years. All three have seemingly secured their core through the draft, and for the first time in years, these franchises are littered with star youngsters such as Auston Matthews, Patrik Laine, Dylan Strome, and Mitch Marner.

To be fair, all three have glaring holes in their lineup that must be filled before truly graduating to contending status. The Leafs lack top-end talent on their blue line, the Coyotes are still toothless on offense despite the best efforts of Max Domi, and the Jets’ goaltending situation has been under fire for the past several seasons. However, the current NHL is littered with young stars, and these teams look to be leading the charge into the future behind these several rising superstars.