While there are more than a couple issues with those rumors, it throws us back to the glory days of the 2000 expansion draft featuring the Columbus Blue Jackets and the Minnesota Wild, two teams that are finally emerging as contenders. Looking back on that draft you realize what a terrible thing the expansion draft is. No good players are available, the team has no direction, and there’s no prospect system to build on.

Nonetheless, for the sake of argument, let’s say that both Seattle and Las Vegas got a team this off-season. (Sorry, I know you deserve it Quebec City and no one deserves to be stuck with the Maple Leafs after last season, but that’s how the chips fell in this imaginary scenario.)

So the Las Vegas Joe Pescis and the Seattle Raindrops have teams. The NHL opts to observe the rules from the 2000 expansion draft. Who do the Minnesota Wild protect?

As Bill Schoeninger highlights in his article about the Flyers and the expansion draft, here are the rules:

Option 1: Protect 1 goalie, 5 defensemen, and 9 forwards. There is no experience requirement for the goalies left unprotected. One defenseman and two forwards left unprotected must have played at least 40 games in the year before, or 70 games combined over the last 2 years.

Also, first and second year pros are exempt from the draft, as are any unsigned draft picks with the exception of players playing for European clubs who were drafted more than four years ago. The final rule is that only one goaltender and one defenseman can be taken from any given team and a maximum of two players can be drafted from any given team.

These rules would certainly change (there are two more teams to choose from), there’s a new CBA, more NTCs to deal with, and if there are four teams picking (unlikely) then that affects things as well. But we’re playing 2000 rules. Old school. 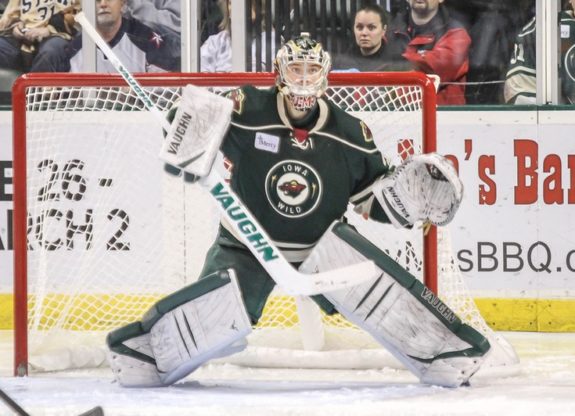 We’re playing playground rules and picking the best players first. But before we start picking teams, we’ve got to pick an option. It seems like the first option is the best for the Wild. They’ve got three goalies going into this season and only one could be taken from them. Honestly, doesn’t this kind of sound like a dream Chuck Fletcher had during the off-season? He can protect one goalie and someone will just take one of the other two away, salary and all.

There are a number of players on the Wild who couldn’t be drafted because they’d be exempt because they are in their first or second pro season. Let’s get them out of the way first.

Let’s start by laying out the players the team obviously needs to protect. These are the stars of the team who are guaranteed to be protected.

That leaves a couple of decisions to make. We have seven protected forwards already. The presumed top six plus Nino Niederreiter. To that list I’m adding Matt Cooke and Justin Fontaine. We’re keeping Cooke to keep a bottom six, grinding forward with the ability to score, which they don’t have without him. Or, they could, but it’s between him and Kyle Brodziak. I’m taking Cooke. With Erik Haula already protected, we’re left with a lot of cusp players and prospects. Of them, I’m taking Justin Fontaine for the experience he already has and the proven goal scoring ability he’s shown.

On defense, we get to pick two more to hit the cap of five protected defenseman. Brodin, Spurgeon, and Suter are no-brainers. Of the remaining defenseman Scandella seems like a lock and that leaves one spot between Keith Ballard, Jonathon Blum, Stu Bickell, and Justin Falk. I’m not taking Bickell. Ballard is great for the team as a depth player, but he’s on a downward trend. I’m not taking him over a young player. Falk has appeal and more experience, but Blum is young and has a higher upside as an offensive-minded defenseman. I’m taking Blum.

The goaltending situation, though murky for this season, seems clear to me here. I’m keeping Kuemper. Harding has health issues and is in the final year of a contract. Backstrom is getting up there in years and has had injury issues. Kuemper is the easy choice for me.

That leaves these players for the expansion teams to pick from.

Don’t forget: “One defenseman and two forwards left unprotected must have played at least 40 games in the year before, or 70 games combined over the last 2 years.” (Though we could say that total between two seasons should, instead of 70, be 53 since only a season and a half of hockey has occurred over the last two seasons.) If we follow the rules from the 2000 expansion draft, on defense Keith Ballard applies, as does Falk if we prorate the games. On forward Kyle Brodziak makes the 2000 rules cut, with Jordan Schroeder and Stephane Veilleux making the cut under prorated numbers. So, we’re set.

What players are you protecting under these rules?