The 2018 Winter Olympics in South Korea are a year away, but sadly the prospect of NHL players participating does not look especially promising. The most recent meeting of the minds allowed for a glimmer of hope, as IOC president Thomas Bach joined the discussion for the first time, but there are still unresolved issues. While the IIHF is now apparently willing to cover the expenses (estimated at over $10 million) for the NHL players’ travel, lodging and insurance, other obstacles seem to have been brought to the forefront.

Participation in the Olympics brings about a considerable amount of risk for NHL owners, including injuries to their world-class players. There is also the issue of shutting down the regular season for up to three weeks, resulting in a condensed schedule. The league tried to use the Olympics as leverage against the NHLPA recently, proposing an extension to the current CBA that would last until 2025. The NHLPA rejected the offer.

With so many moving parts, at least one interested party is going to have to make some sort of compromise in order to get NHL players to South Korea next year. With the IIHF offering to pay and the players expressing strong interest in participating, it appears the owners will have to be the ones to budge. In any case, the clock is ticking.

This standstill is in danger of marring a truly great hockey tournament, but what it cannot prevent is my desire to construct a roster for Team USA in the event that this all gets resolved. So without further delay, here is the first of a two-part piece outlining the players and head coach I’d like to see representing my country next winter.

In Sullivan We Trust

Throughout this construction there will be some surprises as well as some obvious choices. The position of head coach falls among the latter, because there is no more obvious candidate than Pittsburgh Penguins head coach Mike Sullivan.

What Sullivan did for the Penguins in 2016 after the firing of Mike Johnston was truly remarkable. The Penguins were a team with no identity under Johnston. Under Sullivan, they steamrolled their way to a Stanley Cup. While Sullivan’s success alone makes him a prime candidate to coach on the international stage, it’s his coaching philosophy regarding Pittsburgh that really translates well into the strengths of Team USA.

Pittsburgh is not a very big team. They play a relatively physical brand of hockey, but their greatest strength is their team speed. It’s how they were able to get past the Washington Capitals in the postseason last year, and how they were able to skate circles around the San Jose Sharks. The Penguins won a Stanley Cup, and continue to have success this season, by creating opportunities through their speed and allowing their undersized defensemen to get involved in the offensive zone.

If the past few world tournaments have taught us anything, it’s that no one can stand up to the size and physicality of Canada. But much like the Pittsburgh Penguins, the United States are home to some lightning-fast forwards and offensively adept defensemen. Sullivan won’t have to stray very far from his NHL coaching philosophy to manage Team USA’s roster.

It’s impossible to talk about leadership and American hockey players without including Ryan Kesler, Zach Parise and Joe Pavelski in the conversation. Moreover, it’d be a crime to exclude them from this roster. These three veterans represent the bridge between the last decade of American hockey players and the next. The United States will need them to anchor the rest of the squad as they have done in the past.

Pavelski was the captain at the World Cup of Hockey last fall, and would be my pick to wear the “C” again in 2018. Parise’s production on a points-per-game basis is down this season, so he may be looking at a bottom-six role, but he’s been far too important to the U.S. team throughout his career to leave him out. Kesler has the fiery, hard-hitting attitude that can galvanize a team, and is the best American two-way center.

All three players turn 33 this year, which means 2018 is likely the last time any of them will get to represent the United States at the Olympics. It would be a true shame if they were to be denied that chance. 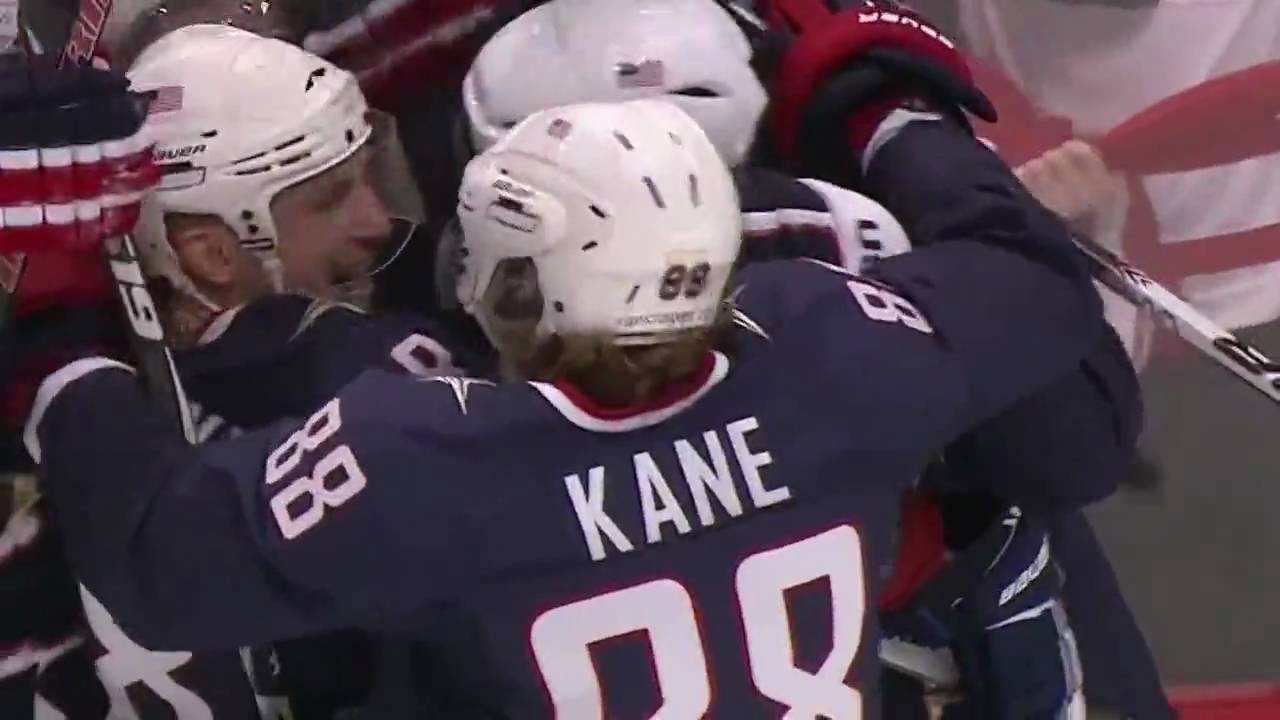 Back in September, while Team USA was being unceremoniously shown the door at the World Cup of Hockey, Phil Kessel unleashed the greatest sports-related tweet of 2016.

Just sitting around the house tonight w my dog. Felt like I should be doing something important, but couldn’t put my finger on it.

Kessel was left off Team USA’s roster then, but there’s no way he’s staying at home this time around. Kessel is one of a few key players who experienced a reawakening when Mike Sullivan took the reigns in Pittsburgh, and there’s no better example of someone who benefited from Sullivan’s emphasis on speed. Also, Kessel led Team USA with eight points and had a plus-6 rating in six games at the 2014 Olympics. Leaving him off the roster in ’16 was a bad move.

Accompanying Kessel in the small-and-speedy department are Cam Atkinson, Tyler Johnson and Patrick Kane. Kane failed to tally a goal in Sochi in 2014, but he is a no-brainer on any roster comprised of the best hockey players of American origin. Atkinson and Johnson, however, may come as a shock.

Atkinson leads the high-flying Columbus Blue Jackets in points, and has the most goals on the team by a wide margin. He’s also on pace to destroy his own previous career bests in those numbers.

Johnson is a solid two-way player who doesn’t care that he’s usually the smallest guy on the ice. What I like most about him, though, is that he rises to the occasion in the playoffs when the stakes are the highest. In the last two postseasons for Tampa Bay, Johnson has 40 points in 43 games. He’s also recorded 62 hits in those games, which is moderately impressive for a player who’s 5-foot-9.

Take one look at the players Mike Sullivan rolls out on a nightly basis for Pittsburgh and you’ll notice he doesn’t care if his guys are big, he just wants them to play hard. He can count on that from Atkinson, Johnson, Kane and Kessel.

The next three players on my roster represented Team North America (Americans and Canadians under the age of 23) at the World Cup, but I’d like to invite them to play for just one country in 2018.

Some may be hesitant to place Auston Matthews on the Olympic squad due to the fact that he’s not even 20 years old yet. He ranks third among all Americans in goals this season with 25, so his youth among players at the highest level is not a concern. He may have to take some beatings in front of the net, but at 6-foot-3, 216 lbs., he is big enough to withstand them.

J.T. Miller has established himself as a leader beyond his years during the 2016-17 season, and he deserves to be rewarded for it. He leads the New York Rangers in points, and can play in all three zones. Miller is also a versatile forward; he can take faceoffs as a center or line up on the wing. He would be invaluable on the third or fourth line as well as the penalty kill.

Brandon Saad, like the aforementioned Atkinson, has been crucial to the success being enjoyed in Columbus. He’s almost exclusively an offensive zone player, but his relative Corsi leads all Blue Jackets forwards with significant ice time. He’s a power forward who can crowd the net, and would fit well on one of the top two lines for Team USA.

Last but Not Least

Rounding out the order are T.J. Oshie, Max Pacioretty and Derek Stepan.

Pacioretty is having a great year in Montreal, leading all his teammates in goals and needing just 17 points in the team’s final 24 games to eclipse his previous career high. He is a high-scoring, big-bodied left winger who belongs on the top line.

The right-handed Oshie makes the cut for similar reasons. Oshie has an incredible shot percentage of 23.7 on the season, but he also throws his body around and can play in all three zones. He’d fit on any line combination as well as the power play.

Stepan’s role on Team USA would be comparable to that of Matt Cullen on Sullivan’s Penguins team: a fourth-line center who kills penalties. Stepan is a great two-way forward on a New York Rangers team that plays precisely the kind of fast-paced, blue-collar hockey the U.S. will need to master in order to win a gold medal in South Korea.

Coming up with this roster wasn’t easy. The United States has a wealth of talent to draw from, and there are inevitably going to be great hockey players who don’t make the cut.

A couple of the most glaring omissions as far as players who have recently represented the United States in international play are David Backes and Blake Wheeler. Both are big, powerful forwards, but I left them out in favor of smaller, faster players that better suit Sullivan’s coaching style. Make no mistake, in a playoff series I’d take these guys a million times out of a million. But as I mentioned earlier, Canada is just too big and too strong to try to beat them at their own game. The U.S. has tried and failed at going toe-to-toe with the physicality of our neighbors to the north; I would prefer to try something different in 2018.

I’d also be remiss if I didn’t mention Johnny Gaudreau. For me, it came down to a personal preference among Gaudreau, Atkinson and Johnson. Atkinson is having a better season on a better team, and Johnson’s fearless style of play won me over a long time ago. Gaudreau will most certainly make the cut in future years.

Later on this week I will release the second part of this feature, where I will discuss defensemen and goalies. In the meantime, feel free to berate me in the comments section for these or any other omissions you feel I’ve made.