Just before the start of the season, the Detroit Red Wings made their final roster move – demoting defenseman Xavier Ouellet to the Grand Rapids Griffins. When asked about the decision to demote Ouellet, coach Mike Babcock gave a rather opinionated response:

The 21-year old Ouellet was eventually recalled and made his season debut on November 20th against the Winnipeg Jets. Through 14 games, Ouellet has one goal, one assist, 20 shots on goal, and is a +4. However, his impact in those 14 games far exceeds what is captured by regular stats. In fact, I’ll go as far as to say that since Ouellet’s most recent call-up on December 12th, 2014, he’s been one of the best possession defensemen in the NHL.

Below is a table of some of the top defensemen in the NHL by name and their 5v5 possession numbers since December 12, 2014. The table includes Corsi For% (CF%), Scoring Chances For% (SCF%) (as defined by War-On-Ice), Scoring Chances Against per 60 minutes (SCA60), Corsi Against per 60 minutes (CA60), Fraction of shifts that start in offensive zone vs defensive zone (ZSO%), Corsi For% of Competition (CorC%), and Corsi For% of Teammates (CorT%), and time on ice (TOI). The leaders in each category are bolded.

From this table you can see that Player 2 leads all players here in CF%, SCF%, SCA60, but has made the most starts in the offensive zone, played with the best teammates, and played against the second worst competition. We can see that Player 4 has the worst CF%, the worst SCF%, but he has the fewest starts in the offensive zone and has played against the toughest competition. What should you make of this table? Well, here’s the big reveal:

That’s a lot of Norris Trophies and one rookie defenseman. From this table, you can see that Ouellet has been utilized similarly to how the Kings use Drew Doughty, but Ouellet leads all of these defensemen in CF%, SCF%, SCA60, and CA60. While we shouldn’t read in to his numbers too much since he is benefitting from starting more shifts in the offensive zone, playing with better teammates, and against lighter competition, we still have to appreciate the level of shot suppression.

Of all defensemen in the entire NHL who have played at least 100 minutes at 5v5, Ouellet’s SCA60 of 17.8 for the season is best in the NHL. When he’s on the ice, the opposition simply has not generated scoring chances at a high level. The low amount of chances against can be attributed to Ouellet’s superb decision-making with the puck in his own zone. You can see that he almost always makes the correct first-pass out of his own zone and very rarely turns the puck over (6 giveaways in 14 games). Red Wings fans have certainly appreciated his quick thinking and good outlet passes, something that has been sorely lacking since the great Nicklas Lidstrom retired. 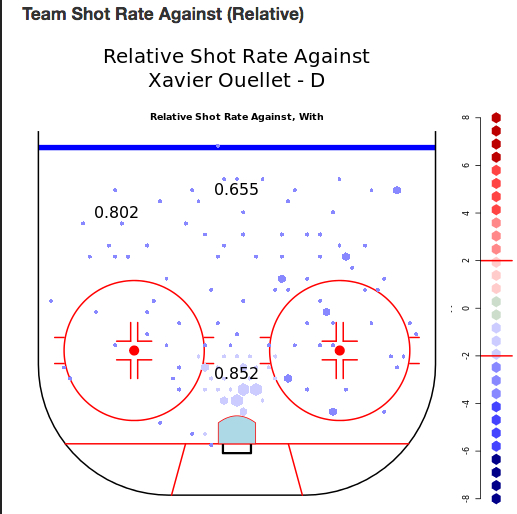 This image from War-On-Ice shows that relative to the league average, when Ouellet is on the ice, the Wings allow fewer shots from each zone on the ice.

I’m not suggesting that Ouellet will be the next Lidstrom, or that he belongs in the same class as Doughty, Chara, and the other Norris winners. We can’t say that from such a small sample size as well as the fact that he’s been quite sheltered. What we can say is that in this small sample size, he has performed at an exceptional level, even when not comparing him to just rookies.

How to Utilize Ouellet Moving Forward

Of course, Ouellet can’t sit back and rest on the work he has done so far. There are many areas where Ouellet can continue to improve, and the Wings can help him by putting him in situations to succeed. In particular, Babcock’s pairing of Ouellet and Brendan Smith has been exceptional for the development of both players. Here are their numbers together, courtesy of HockeyAnalysis.

As you can see, the duo has played 81 minutes together and they’ve absolutely dominated 5v5 play, with a Zone-Start Adjusted Corsi For% of 64.8%. It’s definitely a small sample size, but when you watch the pair together, you can really see that both players are strong skaters, make good first passes, and have the potential to drive Detroit’s offense. I think this pairing can grow together over the next couple of years and really become a standout top pairing.

I hope Ouellet is able to remain with the Red Wings for the rest of the season. He has clearly outperformed both Jakub Kindl and Brian Lashoff and one could argue that in his short time in Detroit, he has outperformed every Red Wings defenseman in terms of possession. When he’s on the ice, the Wings have done an outstanding job of limiting both shot attempts and scoring chances against. This is a big part of why Ouellet has been on the ice for just two 5v5 goals against in 14 games. He’s an outstanding talent who will be a part of Detroit’s blue line for years to come. He’s been outstanding thus far as a rookie, arguably Detroit’s best defensemen in the 14 games he’s played in. He’s only going to get better Red Wings fans, so sit back and enjoy the ride.