After playing their final game of the preliminary round at the World Junior Hockey Championship, the tournament can already be called a success for Denmark.

On Tuesday the Danes played their fourth game of the tournament against Switzerland and after trailing 2-0 to the Swiss, rallied to capture the country’s first ever win at the tournament.  Suffice to say, after failing to achieve a result any better than an overtime loss, the win was the biggest moment in Denmark’s history at the tournament. The celebration of the team following Georg Sorensen’s final save to solidify the win, shows just how important the ‘W’ was for the team.

The Danes currently find themselves third in the Group B standings with four points, ahead of Switzerland who also has four points and the Czech Republic who sit last in the group with two. So if Russia can find a way to beat the Czechs in regulation or overtime or Sweden can beat the Swiss in regulation on Wednesday Denmark will make their first ever appearance in the quarterfinals.

It’s Been a Long Road for Denmark

The history of Denmark in the world juniors is a very recent one with next-to-no success. The country saw its first ever spot in the tournament back in 2008. Unfortunately for the Danes the team lost all seven of their games and as quickly as the tournament began 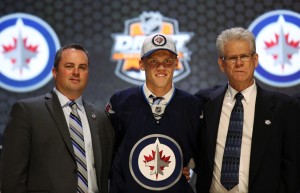 Nikolaj Ehlers is a first round pick of the Winnipeg Jets and has been a leader for Denmark. (Bill Streicher-USA TODAY Sports)

they were sent back to play in Division 1A. The team would remain in the lower level for the next four years until 2012 where once again they were able to win the division and earn a spot in the holiday classic.

However, just like they had in 2012, the team lost all seven of their matches and once again headed back to Division 1A. For those unaware of the process, every year while the top teams move on to the quarterfinals on their way to the gold medal game, the bottom teams from each group face each other in a three-game relegation series. The loser of the mini-series loses their spot to the country who is able to win the Division 1A championship in the following year’s tournament.

Enter this year, once again Denmark was not expected to make it into the tournament, but after upsetting the favourites, Latvia, the team earned their third-ever birth in the tournament. However, if you look back nearly three weeks ago, you might have actually had a little hope for this underdog squad. Kindersley, Saskatchewan hosted the World Junior A Championships where the Danes fell to the United States 3-2 in a shootout in the gold medal game. The tournament was a huge stepping stone for Denmark, whose Nikolaj Ehlers lead the tournament in scoring with six goals and nine points in four games. 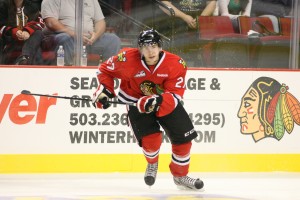 A big reason for the success of the team has been the play of its top stars Ehlers and Oliver Bjorkstrand. Ehlers was drafted by the Winnipeg Jets ninth overall in 2014 and has been lights out with the Halifax Mooseheads of the Quebec Major Junior League. The 18-year-old this season has 16 goals and 47 points in 23 games this season. Last year the winger had 49 goals and 104 points in 63 games with Halifax.

Bjorkstrand currently sits tied for second in tournament scoring with four goals and five points in four games and sits just one point behind Canada’s Nic Petan for the top spot. The19-year-old is a 2013 third round pick of the Columbus Blue Jackets, currently playing for the Portland Winterhawks of the Western Hockey League. He, like Ehlers, was a part of the team that won silver at the Junior A Challenge where he finished with five points in four games. This year with Portland the right winger has 21 goals and 40 points in 28 games and last season eclipsed the 50-goal mark, tallying 50 to go along with 59 assists in 69 games for Portland. Bjorkstrand has been arguably the team’s most valuable player during the tournament and his goal in regulation and eventual game winner in the shootout versus Switzerland seem to be the biggest proofs of that.

Entering Tuesday’s game the team held the fifth best team save percentage at 0.909% which has since risen to 0.915%. They held the fourth best team shooting percentage with only Canada, Sweden, and Russia with higher totals. And held the fifth best penalty kill, ahead of Russia and last year’s tournament winners Finland. Not bad for a team who prior to Tuesday’s win had dropped their previous 17 games at the tournament.

In their World Juniors Edition, The Hockey News predicted a ninth place finish for Denmark, slotting them just ahead of Germany, and ultimately playing the Germans in the relegation round.  In a year of firsts for Denmark it looks like this might also be the first year the team doesn’t have to play for a spot in the tournament next year.

If the team can find a birth in the quarterfinals, it is hard to believe they will advance any further from there, but for a team that had the world against them coming in, 2015 may very well be looked at as a success for the little team that could.

Devils Still Have Plenty of Cap Space to Spend